Wednesday players please hold off reading this entry until after tonight's game! 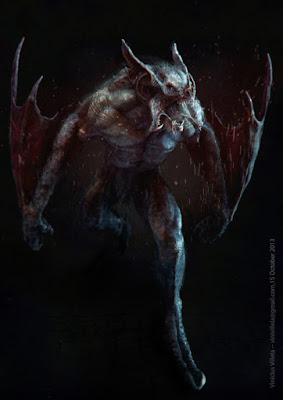 The Chilopteroids are six to eight feet tall, and resemble humanoid bats, with membranous glider-folds between body and limbs. They are native to a bleak, windswept world called Gleison, where they have spent ten thousand years slowly developing an elaborate society built on slavery. The chilopteroids developed space travel thousands of years ago, and initial slow FTL ships migrated chilopteroids to other colonies, most of which failed. In time they discovered transitional drives and their later ships migrated into the stars, but this time with a different intent: to conquer and enslave.

Today chilopteroids are a decadent society that harvests slaves from other civilizations and drains them of life force using a technology called blood crystals, organically grown crystalline devices that bond to their slaves and drain them of vital psychic energy, feeding it to the chilopteroid master, allowing him regenerative abilities and near-immortality. The predatory nature of the chilopteroids means that they favor pre-FTL societies, or civilizations with low tech in general, for they are usually ill equipped to deal with the “space vampires.”

Each chilopteroid is equipped with an impressive photosensitive epidermis which is adapted to perfectly mimic light sources around them; this allows them to defeat attempts to see them through a normal spectrum as if they had used the invisibility meditation, but it fails when they move at full speed (they can maintain it at half speed) or if they engage in sudden movement. The invisibility camouflage does not work well against motion detectors or infrared detection, and is utterly useless against extrasensory perception.


Despite their similarity to Terran bats, chilopteroids do not use sonar and actually have incredibly well-developed vision, which aids them in detecting their own kind when camouflaged.

Blood crystal Implant: A chilopteroid with its blood crystal receptor will regenerate 1 hit point per turn, and leaving a body around will let it come back to life eventually; only destroying the body will stop the regeneration.

Chilopteroid Blood Crystals: these crystals have a “collector” type and a “receiver” type. They drain psychic energy, draining 1 point of INT and WIS per day to a target that fails a saving throw. When the target reaches 0 in either score it becomes brain dead and dies; the crystal has an emergency cutoff point, however; chilopteroids don't like to lose hosts. If a host is about to perish, the crystal will go dormant and allow the host time to recover (see below) before reactivating. Such hosts are in a deathly state described as "torpor," recovering 1 INT and WIS per day. When the host is healed, the crystal resumes draining.

During the draining cycle the target suffers madness and delusions, and develops a cult-like belief in the divinity of the chilopteroid or entity with the receiver crystal installed. The receiver crystal will regenerate 1 hit point of damage or remove one deadly condition per turn to the bearer so long as at least one collector crystal is in a living host. The chilopteroid will also be ageless and immortal.

The crystals require a minor surgery to install but quickly bind to the nervous system. Removing one from a living host requires medical expertise and the target must have a saving throw or take 4D6 damage from the process. A target freed of the crystal can make a Save to recover, and on a success will recover 1 INT and 1 WIS per day until restored. If a natural 1 is rolled on the save then the target loses 1D4 of each, and could die if reduced to zero.

Other species have been able to use the blood crystals with mixed success; non-chilopteroids must make one save for each week that a receiver crystal is implanted, or develop debilitating, cancerous growths, as the crystal rejects the alien organism. This process causes a loss of 1D4 hit points per day until surgical removal of the crystal.
Posted by Doctor Futurity at 6:00 AM