White Star has dramatically rekindled my interest in the Swords & Wizardry movement...not just the OSR movement, mind you, though that's definitely a part of this. Rather, the S&W spin offs themselves. I haven't run (or played) S&W in a while, but I feel like I need to return to it this year.....so adding it to my "must run" list for 2016.

It's also got me interested in more of the White Box phenomenon. I've always been keen on S&W Complete, but the truth is White Star is mechanically a spin-off of the White Box edition of S&W, which is itself of course the evolutionary spawn of OD&D. To this end I recently purchased a copy of the White Box edition off of Lulu....and may actually start thinking about ways to implement it. I also snagged White Lies while I was at it....this one is worth checking out if you haven't heard about it yet; I've read the PDF and it looks like a lot of fun in the White Star vein....but for espionage, instead.

Since the last time I ran and played S&W Complete I have acquired pretty much "all of it," including Monstrosities, Tome of Horrors Complete, and many, many scenarios and campaign books....it would be so easy to get a game going, and I'd use my classic Lingusia setting as the core since that world was born out of a medley of B/X D&D and AD&D 1E anyway, so S&W Complete would be a shoe-in; the assumptions in Keepers of Lingusia overlap with 1E sensibilities very precisely.

Interestingly, I also acquired the Barrel Rider Games' White Box Omnibus and can't help but notice that it manages to do everything that S&W Complete does, but using the core conceits and design features of the White Box itself....if you're in the least bit interested in seeing how flexy the White Box is, the Companion is a must.

No idea where I'd fit this in....with my Wednesday group currently enmeshed in a mix of D&D 5E and now White Star, and my Saturday group having pledged an unholy union with Pathfinder for eternity, I can only plan and hope....and in the interim I can, of course, use the blog as an outlet for creative energy on the S&W front. 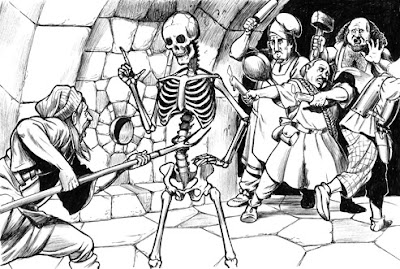