To get the threat level very high, the Void Lords will be utterly terrifying....these things raise stellar dragons like cattle as a food source... 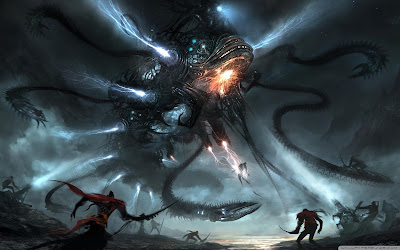 Appearing throughout the edge of the galaxy in the Outer Rim some 20 years ago in 3677, the Void Lords are a terrifying scourge that has permanently altered the power structure of the old Galactic Territories, and entirely destroyed whole sectors of space in their wake.

The Void Empire is ruled by these mysterious aliens, who some suspect may come from the Andromeda Galaxy, and others contend could possibly be visitors from a neighboring parallel universe like the Dark Stars Entities claim to be. While neither origin is certain, what is known is that the Void Lords are slavers and conquerors, and what they cannot conquer they destroy, utterly.

The Void Lords are physically immense, creatures of whale-like proportions typically measuring 20-50 meters in length, with the eldest Void Lords being as long as 100 meters. They sprout dozens of tentacle like appendages which end in fine manipulators called "feelers" that are more dextrous than most people can imagine. The Void Lords have dozens of sensory appendages that seem to compensate for a lack of the normal physical sense of smell, taste and sight; they do not seem to see in normal wavelengths of light, instead relying on their supreme mastery of dark energy to "feel" things and events at what some believe to be a quantum level. This gives them predictive powers that are beyond measure....their tactical acumen is staggering, and only the appearance of the star knights from the Dark Stars late in the war with the Makamian Empre gave humanity a fighting chance.

While each Void Lord is a formidable opponent and capable of downing entire ships on their own, they prefer to rely on others to do their work for them, as it seems that their species is not prolific and some suspect only a few hundred thousand may exist currently. To this end the Void Lords have demonstrated amazing biotechnological skills, and are capable of enslaving entire populations to their will through a combination of biowarfare and nanotechnology. Moreover, they appear to be able to instill the power of the star knights to manipulate dark energy into certain subjects, and the result are their generals on the field of battle, the terrifying void knights which serve them relentlessly in their efforts to conquer or destroy.

Void Lords have proficiency in all star knight meditations as if they were level 20. They are equipped with cybernetic enhancements for their species, which include enhanced senses, stronger “feelers” and the ability to survive in harsh environments, including the depths of space and in regions of intense radiation (Void Lords are never damaged by radiation). They are also equipped with an anti-mater array; this weapon is designed for their size, but lets them generate a pellet containing just enough anti-matter to annihilate nearby  targets with shocking efficiency. Star knights know that you can target this array and if you strike it with a critical hit then there is a 50% chance the array will rupture and explode, dealing damage from its next generated charge directly to the Void Lord.

A Void Lord’s most powerful ability for many, however, is its domination. The Void Lord must first gain contact through its feelers with a target to use this special ability. If it has grabbed a foe (helpless or otherwise) it may spend 1D4 rounds concentrating on the target, reading its mind. The target can make a save against this effect (resistance to mind control will apply) but the target is at a penalty on the die equal to -1 for every three levels or hit dice below the hit dice of the Void Lord it is (star knights do to suffer any penalty). If the target fails its check, the Void Lord strips and reprograms it’s mind to be an obedient servant, expelling any personality elements that would lead to sedition. Furthermore, if the Void Lord senses the potential for the subject to manipulate dark energy then it will save the new subject for further modification to begin training as a void knight.

Void Lords are capable of ship combat, being so large. They may treat their hit points and other stats as a vehicle, as well as movement. Most Void Lords are also equipped with a FTL array allowing them to drop into warpspace, the non-baryonic matter realm which facilitates FTL travel in the Dark Stars universe.

If adventurers are unfortunate enough to meet a Void Lord in person and not behind the rack of their ship’s cannons, then they deal 1 real point of damage to the Void Lord for every 10 that they inflict (round up) due to its level of armor and shielding, which is equivalent to an attack cruiser. Weapons designed to inflict damage against vehicles and ships do normal damage, and any attack which crits deals normal damage as well (a lucky shot). Damage from meditations and star swords (which harness dark energy) or any attack powered by dark energy deal normal damage to Void Lords.