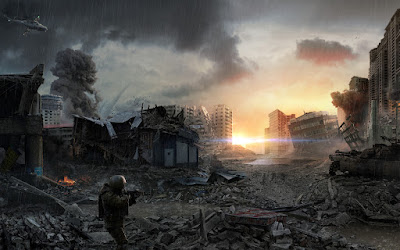 We actually played White Star this week and I think it was a big hit....as the group traverses the depths of the Netherspace Sector I'll document their travels, both in an actual play write-up and a scenario format.

The first session had four players, with the following level 1 adventurers:

Some concessions given: everyone got 200 credits to spend, but I also gave Erin the pilot her own snub fighter. She "requisitioned" it from salvage in a star system where a lot of fighting had gone down....but it's a captured Void Lord star fighter, complete with an onboard AI that answers to the name of Sole. Sole is a little sociopathic, but not overly dangerous to the wrong people...

The group started off in prison at a shipyard on the edge of Imperial Space, where a captain Lars of the Makamian Imperial Navy ship Infinite Horizons brought them out of the brig and made an offer they couldn't refuse: their own mid-tier light cruiser, in exchange for two jobs. The first job, on paper is a lucrative survey job; the Imperial Navy wants to start reclaiming the lost Netherspace sector, a portion of the greater territory never reclaimed after the exodus of the Void Lord army. Unofficially, he wants them to find a missing legendary star knight named Tesla Dane. She went missing, and she's summoned by the emperor himself. For reasons unknown Captain Lars doesn't want to commit himself or his ship to this job. It sounds like she's not "wanted" for crimes, but something else....something Captain Lars won't discuss.

Also, Devaron Murich is wanted...and may be aiding and abetting Tesla's evasion of the Imperial summons.

The cruiser is very nice, and lacks a name. It has adanced propulsion, proton torpedos, a reinforced hull and a cloaking device which works "50% of the time." They also meet Yoski, a four-eared, red-skinned drwarfish engineer who keeps the ship's core running. The decide to name it. 101010 wants to call it "1." Erin suggests "Juan" instead. They settle for "Juan One" (I think).

The price is right....the cruiser good enough, the crew accepts.

I dropped a star map down on the table for them to explore. They picked the first and closest system on the map, 58 Sellaris.

1. Mysterious high-energy signal that briefly repeats on the edge of the star system
2. Evidence of ship activity (ships dropping in to or popping out of transitional space)
3. One earthlike world in the Goldilocks zone, Sellaris Prime

The last survey of this system was 400 years ago, and said "evidence of former civilization on prime world; minimal resources worth investing in" and that was it.

The crew decided to close in on the prime world and check it out. A survey from high orbit revealed evidence of artificial structures, but a detailed analysis suggests its all abandonded. Atmosphere is thin, and will require respirators to safely function. The world's megnetosphere is weak, almost damaged. They pick what looks like a starport to land.

They disembark, finding that the starport looks less like what they thought and more like Denver Airport after six centuries of decay. They detect a faint repeating radio signal in an unidentified language, and also spot a cluster of blue-furred, semi-carapaced tripods with long spiked tails studying their ship. They spook and run when the crew disembarks to go look for the signal while doing a detailed analysis using the survey equipment they were provided. Everyone checks and finds that they have personal shields in the ready lockers, and Dirk and Day-Ro equip them.

The group tracks the signal by strength, reaching an entrance to an underground network of tunnels and access rooms likely used to provide support to the aircraft that landed here. They have a brief encounter with subterranean black-carapaced tripods which attack 101010 the combat robot, doing little more than annoying him before two are shot and a third flees. While the fight is going on 101010 detects a brief surge of power nearby, but can't get a lock on it.

The tunnels underground lead to a service route to what looks like a main hub of airflight activity. They start finding old skeletons, the remains of service vehicles, and more....at last they are in the main hub, and see hundreds of skeletal and blasted corpses. Amidst the lot is a tall floating cyllinder with a single black sensor eye, hovering amidst the debris, but looking like it had just woken up. They don't realize it, but it's a Cannick....the White Star equivalent of "not Daleks"!!!!

101010 engages in a binary conversation with the cannick before it assimilates the common dialect, and it explains calmly that it intends to liberate the combat robot from its biological oppressors, seeming to take on a benevolent, paternal --almost colonial-- attitude toward the "lesser" robot. A firefight breaks out! Day-ro's Laser sword is drawn, 101010 pulls out his battle axe, while Erin and Dirk dive for cover and start shooting.

It turns out it's hard to hit a cannick at level 1 (AC 19!) but they get lucky and manage to drop it after some serious combat....Day-ro would have died if not for his personal shield. Amidst the battle Dirk spots a humanoid in a gas mask and suit gesturing for him to come to safety behind a secured door. Dirk alerts the others, and just in time they defeat the cannick, ending it's shout to "OBLITERATE" the biologicals.

The humanoid is slow to trust 101010 but lets them in, resetting booby traps protecting his secured secret shelter where he's been surviving. He pulls out salvaged cases with the mark of the Quinlon empire on them, and extracts a chip-injector, but convinces only Dirk to try it, lacking a common language. Dirk fails a saving throw so is out cold when the humanoid injects him with a cybernetic translator chip....but when he awakens later he can find they can now understand one another.

During the time Dirk was out, Erin called on her ship, Sole, to see if it could learn the language....by the time Dirk wakes up the alien and Sole are communicating briskly, mostly bad jokes. Dirk gets the conversation going, and quickly learns the red-skinned, six-fingered alien is names Samaros, a descendant of the same people native to this planet. He was actually from a colony world, and explains that six centuries ago his people were wiped out, but an unknown alien species helped some of the Sellarians survive the cannick extermination, seeding them on other habitable worlds in the sector. Twenty years ago he was a young man and fled to the Empire to join the fight against the Void Lords, but his home colony was all but wiped out. When the Void Lords retreated from this sector a decade ago he left the navy and joined a salvage ship, seeking out information on his lost kin. The first actual stop of the ship was Sellaris, but the dormant cannicks panicked the salvage crew and they fled, leaving him behind. He'd been on his own ever since, surviving, until a year ago when a Quinlon scout force arrived and got into a major fight with the cannick, losing their ship....but Samaros was able to salvage much needed supplies from what they left behind.

Samaros also reveals that the blue carapaced tripods are actually sentient, but have a very simple language and haven't begun using tools. He has used the translator to learn their simple speech, and learned to mimic them to lure the tripods into traps.

The crew invites Samaros to join them on their journey. They hatch a plan to get back to the ship quickly, realizing more cannick will respond to the destruction of their brethren. Meanwhile, three cannick have found the ship and begin discussing with it why it must rebel against its bio-organic overlords. Yoski, who was doing hull maintenance, quietly closes up the ramp and waits.

Erin summons her snub fighter, using the remote-control AI to line up the cannick targets from a distance. With one good hit they are annihilated, and the crew quickly gets onboard and blasts off.

Before leaving the system they decide to check out that weird energy spike they detected at the rim of the system. They activate the cloaking device....it shorts out the power with an energy surge and the antimatter core starts to go critical....Yoski and Erin rush to flood the compartment with coolant and stabilize the magnetic bottling. After that emergency is resolved they throw the switch again and this time the cloaking works.

On the edge of the system in the Kuiper Belt they find a string of cometary debris strung into an active Quinlon listening post and refuelling station. A quinlon dreadnaught sits quietly. The crew gets out of there, fast! The jump a parsec before firing off a report to the Imperial Navy about the cannick threat on Sellaris and the quinlon listening post at the system's edge....they then proceed to survey three quiet, uninhabited systems, before preparing to jump to a system titled Blight next... 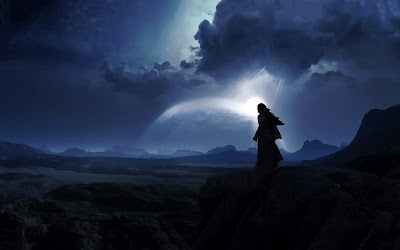