Darks Stars V: Transitional Space; the rules, the drives, and the hazards 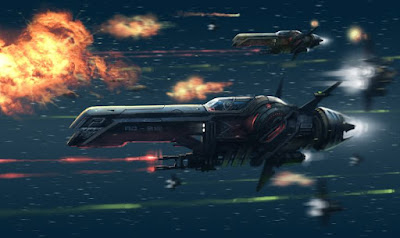 In the world of Dark Stars all faster than light travel comes from the use of the Transitional Drive, while all local system travel uses Foldspace Engines, a form of localized warp drive. Mechanically any vehicle can be equipped with both drives; the technology for transitional drives is proportionate to the size of the vehicle moving through transitional space, so there is actually a diminishing return with larger vessels….but sometimes, the need is worth it, and most naval fleets in the Dark Stars universe are comprised of immense dreadnaughts and battle cruisers primarily so they can carry the necessary firepower to punch through the shields and armor of their opposition.

Transitional space (also called T-Space) is the term used to described folded dimensions through which ships “travel” when the drive is on. From a physics view it effectively wraps the vessel in higher-dimensional space (of 26 possible dimensions, most of which are folded in on themselves at a quantum level) allowing it to move outside of the normal spacetime continuum. In transitional space starships can move over vast distances, averaging one parsec (3.26 light years) for a class I T-drive, while avoiding problems with relativity.


There are only a couple downsides to T-Space travel: the first is that these dimensions are where gravitons operate, creating gravity waves in normal spacetime (see navigation below), so large gravity wells are really, really dangerous in T-Space.  The second problem is more difficult and more dangerous: T-Space is where nonbaryonic matter (dark matter) interacts with regular matter, and is where gravitons also interact with said matter, leaving dark matter’s weird “footprint” all over normal spacetime. Nonbaryonic lifeforms….some very cunning, intelligent and organized are out there, and they really, really don’t like us using their space for fast travel; especially since they can’t do the reverse. While in T-Space this is the only time nonbaryonic beings and normal beings can interact.

All ships have foldspace engines, which are used for routine in-system navigation. Foldspace effectively creates a localized warp bubble around the ship, pushing it forward in the direction the ship wants to go. It has two huge benefits: it lets ships move quickly in-system, reaching most locations in hours or less, with low energy cost, and no relativity issues; 2: it helps to avoid the problem of moving at high velocities with sudden evasive movement causing terminal results for the squishy crew inside; to a ship in foldspace the ship is motionless, and the universe is moving around them. All ships still use artificial gravity (graviton generators) and inertial dampeners….but the risk of death due to high-gee maneuvers is space is severely lessened. GMs may rule that on a natural 20 in ship combat an attacker can roll a second time…and if a second 20 comes up, and damage is dealt, then the targeted vessel’s foldspace drive is knocked out. Such ships are sitting ducks.


Foldspace can be used for FTL travel, by the way; but it doesn’t allow for anything close to the speed of T-Drives; a ship moving at foldspace speeds can traverse 1 parsec in approximately 3 years. Very, very large foldspace engines with immense energy requirements can do the job faster, but are highly impractical. Ships with old foldspace technology used for FTL travel usually date back to the old human colonization era nearly 1,500 years ago and are considered bizarre relics. 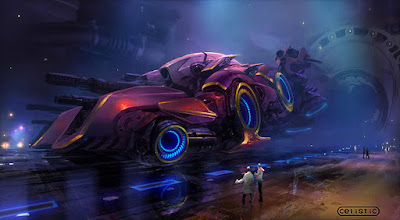 FTL drives in Dark Stars come in six ranks. A rank 6 T-Drive is the slowest (but cheapest) costing only 100 extra credits to install on a ship without a drive, or free if the ship comes preloaded with FTL. A Type 6 drive takes one week to traverse a single parsec. Other drives are faster, and cost more as follows:

*Type 0 are hypothetical drives; a few alien relic ships are known to have them but no one currently knows how to make one this effective. Type 0 are good found tech, but navigating with such fast engines always imposes a -2 navigational penalty (see below)

This means that any ship which moving at FTL speeds in Dark Stars needs to make a navigational check to see how smooth the ride goes. Pilots (and any pilot-based class, or class with some sort of pilot ability or skill) can make a saving throw with a +2 bonus when rolling to plot an FTL course. Other characters attempting to pilot without special skill or class abilities get no bonus. If the region the ship is moving through has significant stellar anomalies (such as strange special distortions, black holes, wormholes or dense star clusters) the GM should apply a penalty of -2 to -5.

Familiarity Option: pilots on a routine course, which is already charted in their astrogation system, do not need to make a roll; GM instead rolls a D20; on a 17-20 something unusual could happen, and the pilot must make a roll.

After making the roll, check the following table for the result (target save is the TS of the pilot; modifiers are applied to the die roll): 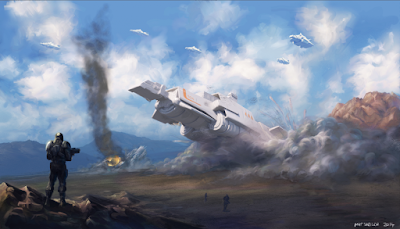 Early stellar civilizations which have not yet discovered foldspace technology or T-Drives are slow, require maneuvering that accounts for the gee forces applied to crew, and frankly modern vessels can run rings around them. To reflect ships that are using various conventional propulsion systems note the following:

Such ships can reach high local speeds but usually require a lot of “break time” to make course changes. For every 1 point of active speed the sip must spend 1 point to course correct. So, as an example, a ship moving in a straight line at speed 12 that wants to reverse 180 degrees must spend 24 points to do so. Normal ships don’t need to do this at all.

Normal ships have a hard time tracking and locking on the faster vessels equipped with foldspace technology. As a rule, such ships are at a base -2 penalty to attack unless they have surprise. 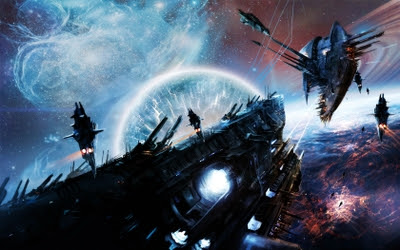