As my gamer ADD keeps me further and further afield I find myself drawn inextricably toward White Star, the ridiculously easy science fiction RPG of old-school mechanics in space opera adventure.* It's a very clean, easy system to pick up, is compatible with most of the OD&D OSR content on the market already, and has a really good groundswell of fan support. It is not a system for everyone....if you aren't used to the premise of OD&D design, it could be disconcerting to have to "relearn" how to play with a minimalist set of mechanics like this. But next to Savage Worlds White Star might be my second choice for sci-fi gaming.

To kick this interest off I'm going to lean on precisely the same technique I did with my Savage Space setting two years ago (damn time flies): I will take a bunch of entries, each one inspired by an interesting picture or concept, and post them here until I've got enough stuff to call it a setting.** Today kicks off with....my first White Star character: 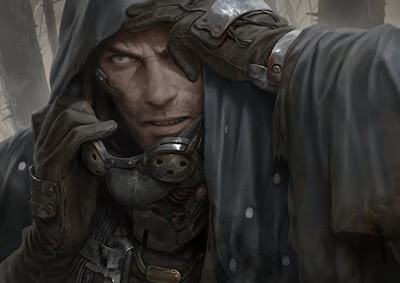 Save Bonuses: +2 vs. explosions and environmental hazards

The Altonian Cluster is the home sector of Devaron Murich, a former pilot for the Makamian Imperial Navy. Devaron was one of the survivors of the Great Purge, when the Void Lords materialized at the edge of the galaxy in 3677 and began their relentless assault against the outer star systems along the spiral rim; his family was able to evacuate mere hours before the old capitol of Septimus Prime was annihilated in the antimatter wave generated by the Void Lord Dreadnought called Typhon. Devaron’s father stayed behind however, to facilitate the evacuation and buy time. Devaron never forgot this, and as soon as he was of age he joined the navy, determined to follow in his father’s footsteps.

Devaron was a soldier and pilot in the navy for nearly a decade before the sudden collapse of hostilities with the manifestation of the first of the enigmatic Dark Stars. The star knights of these “black suns” as some also called them were quick to join forces with the Makamian Imperial Navy, and in only a month the Void Lords were being pushed back to the outer rim, even losing several dreadnoughts, though Typhon was not among them. Devaron was so impressed with the agency of the Dark stars that he mustered out of the navy when the opportunity presented and sought entrance into the order of the Star Knights. To his surprise, it was not to be; he lacked the gift, the ability to manipulate the dark energy that powered the unique abilities of the order’s agents.

Disgruntled but not defeated, Devaron took his unique status as a pilot and veteran of the war out into the frontier, and even the outer rim, in an effort to search for his father, and learn of his final fate. He has spent several years now exploring the battered and devastated worlds of the Altonian Cluster, and most importantly learned that the Septimus Prime defense force had survivors, who continued to fight the Void Lords for years after their sector of space had been overrun. Devaron now seeks out the survivors of this splintered military remnant, which still battles the Void Lords in the outer rim, hoping his father might still be alive.


Devaron is kind of a loner, but he will work with others on occasion, and may even employ a crew or additional (larger) ship for especially involved salvage and recovery operations to fund his exploration of the Altonian Cluster. He has also worked both with, for and against the so-called Witch Queen Teramaxis in the past, leader of the Segurandi Dominion, which has kept a carefully neutral relationship with both the Void Lords and the Makamian Empire.

*Plus Erik Tenkar's doing some cool stuff for White Star on his blog as well, which got me inspired.

**I'll probably use a few White Star sourcebooks I have as well, and don't be surprised if some Hulks & Horrors creeps in to the mix...the graveyards of the Altonian Cluster are a shoe-in for the ruined worlds and wrecks of that system.
Posted by Doctor Futurity at 6:00 AM