Sarvaelen in Fantasy AGE: The Emoniae as a PC race

I've been working on lots of Sarvaelen conversions for Fantasy AGE. Here's the Emoniae, the human race with elemental taint that dwells in the far west, and once comprised one of the larger forces in revolt in the old civil war against the Empire of Camrinal which also survived the devastating purge of the emperor that destroyed everything....

This race has a bloodline taint which I have left as an optional aberration, although I considered modeling it as a specialization...problem with that is if I do, then emon can't also choose from a specialization. Ultimately the taint is a powerful trait which eventually corrupts the emon's humanity, swallowing it whole....enough, perhaps, to weigh out the advantages knowing that too many elemental traits will turn the PC into a dangerous NPC. 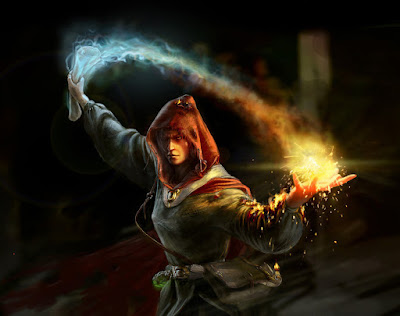 The People of Emon

Also known as the Emoniae, the people of this distant land exist far in the west, beyond the ruined expanse of the wastelands of Camrinal. Emon was the greatest independent threat to Camrinal in its era of rule, and the Emoniae were a culture of sorcerers much like the Empire. When the Final War erupted, their lands were devastated, and the Empire sought to exterminate their greatest rivals as quickly as possible. When the conflict ended with the destruction of Camrinal, most of Emon’s warriors were caught in the destruction, and destroyed. Still, there were plenty of survivors back home, now mostly dwelling in ancient, deep enclaves within the vast Adasatrak Mountains where they stood guard against the outside world.

Elemental Taint: Emoniae revere the elemental old gods, and still worship them. There is a chance that any emoniae has some elemental heritage in his or her bloodline. The immediate effect is an innate basic understanding of the elemental tongue and an affinity for that element, which means that they tend to be regarded favorably by elementals of like type that they meet (at GM's discretion a +2 reaction modifier; see below for other features this taint induces).

Emoniae Focus: elemental affinity (choose one elemental type)
This focus lets the emon mage add his focus bonus to elemental attacks of the same type (i.e. fire, air, water, earth, shadow). Gaining this focus also means that the emon has elemental taint (see next), can speak the elemental language of choice, and may gain the focus bonus on positive reaction rolls with elementals.

Elemental Taint
An emon who chooses to be a mage and also gains the elemental affinity focus gains elemental taint. The first time this happens, usually at level 1-3 (the GM can roll randomly to determine when),
he or she begins to manifest a sign of elemental corruption, usually in the form of a glow or emission from the skin, and a slow but certain "change" on the skin that seems to be a manifestation of that emon's elemental taint (stone-like skin, persistent water running from pores, smoke, or a misty fog following the emon). This first manifestation is cosmetic and can be suppressed with concentration (a TN 11 vs. willpower (self-discipline) check).  Once the emoniae reaches level 4 and chooses a specialist discipline, each rank of proficiency thereafter the emoniae must make a check against willpower (self-discipline) at TN 12 (novice), TN 16 (expert), and TN 21 (master) to avoid manifesting new taint effects. This roll becomes harder (-2 penalty) if the elementalist specialization is taken.
Roll each time to see what manifests:

Emoniae Elemental Corruption Chart
1D6      Elemental Corruption Type
1-3       Elemental resistance: take half damage from the elemental type you are tainted by; if you roll this a second time gain immunity to that elemental type damage.
4-5       Gain power to summon an elemental of your corruption type for 1 hour. Requires 5 minutes of concentration to summon and 5 MP to cast. The second time you roll this you learn to summon a larger elemental for 8 MP, and the third time a huge elemental for 12 MP.
6          gain permanent emission of elemental type: stone skin (gain 5 AR), fire erupts from flesh (immune to damage from it but deals 1D6 to all on touch), air (gains levitate at will at your speed), or water (emits water permanently, gains water breathing). These traits are very difficult to disguise and require a willpower (self-discipline) check of TN 18 to supress for 1 hour. The second time you roll this effect you become a true elemental being. The form changes noticeably to be "more" of the elemental type and the emon's humanity becomes suppressed. Breathing is no longer necessary. The third time you roll a 6 the emon gains the ability to plane shift to his elemental plane of appropriate type at will for 6 MP. The fourth time the emon rolls 6 on this chart he becomes a true elemental and departs the material plane, becoming an NPC at the GM's discretion.
Posted by Doctor Futurity at 6:00 AM

Email ThisBlogThis!Share to TwitterShare to FacebookShare to Pinterest
Labels: FAGE, fantasy AGE, sarvaelen, tales from the watchers of the sullen vigil

The best D100 based gaming