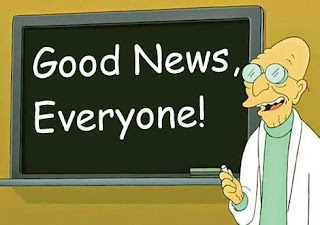 Today was a hell of a day but I arrived home to discover that at long last my Deluxe Tunnels & Trolls Kickstarter package had arrived. Within I found:

1 hard cover Deluxe T&T rulebook (thick enough to stun an ox)
1 empty 5th edition box to serve as extra protection, but I can use it to store....
1 pack of DT&T character sheets
1 DT&T GM's Screen (with a lot of useful stuff on it!!!!)
1 Buffalo Castle
1 Complete Dungeon of the Bear
1 Deathtrap Equalizer
1 Deluxe City of Terrors
1 Adventurer's Compendium

Now, time for a Kickstarter to convert and reprint all the old solos! Especially Gamesmen of Kasar, Mistywood and Blue Frog Tavern. Oh, and Sea of Mystery, too. I mean....I have all of them, sure, but now I want shiny new DT&T versions!

If you're late to this party, or a Kickstarter abstainer (wise fellow), you can now purchase the PDF version of DT&T here. I do not yet see a link to order print copies anywhere, so not sure if that means there are none, or if Rick Loomis is just waiting until all the backer mailouts are done, but I sure as hell hope this edition is in print and in stock for new gamers interested in T&T. Thanks to John Stephens for pointing out that DT&T's softcover edition is over on Amazon for ordering! 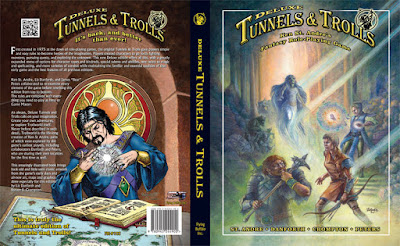 As a side note: if you love OSR games, and you've seen and found games which try to figure out what an "alternate reality Original D&D" would look like: keep this in mind: Tunnels & Trolls is a real life example of what an alternative OD&D actually does look like. And unlike D&D, T&T has managed to keep its identity surprisingly intact over the decades, so much so that you can use almost anything from any edition with any other edition with minimal fuss. Plus...the DT&T book really showcases what the Dragon Continent (I'll always know it as Ralph) and the rest of the Trollworld looks like....giving you an even more intriguing look at what alt-D&D looks like with alt-Greyhawk (Forgotten Realms is far too new school for this comparison; it's Greyhawk, Arduin, Blackmoor, the Wilderlands and Ralph hanging out back having a smoke after class).
Posted by Doctor Futurity at 5:59 PM