The Broken Sword appears as a shortsword with a visible "crack" which appears to be a worrying imperfection in the blade itself, suggesting the weapon will break easily if used. In actual use the crack, to an attuned user, glows brightly when in battle, like a jagged hot white light.

The weapon is a +3 shortsword in ordinary unattuned hands. To the attuned the weapon also detect foes within 60' of the wielder, warning of any immediate threat. The weapon is otherwise relatively unassuming.

If a character with the weapon seeks out a temple to the god Hermes, pledges his servitude to the god, and carries out a series of tasks befitting of a servant of the god then he may gain the rank of an avatar. In the hands of an avatar the Broken Sword has three additional abilities: it can cast Plane Shift once per day, it can disrupt any planar rift or gate it touches, and it acts as a permanent dimensional anchor to the wielder, an ability which can be dismissed or activated at will by the wielder as a bonus action if so desired.

Disrupting planar gates is simple: the weapon ends any active spell or effect emitting, projecting or creating a gate when it touches the gate in question. To permanently end a gateway or device which projects the weapon must physically shatter such mechanisms. It deals double damage when striking an object or other device used to create a planar portal. 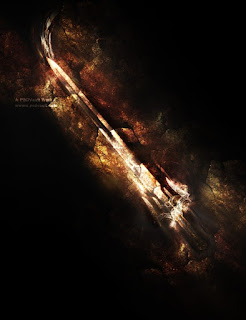 Lingusian History of the Broken Sword

The Broken Sword is one of the legendary avatar relics of the Lingusian deities. Each avatar weapon is defined as one of the physical instruments of the gods, wielded by a deity in its corporeal form before the ancient War of the Gods, and usually buried with that deity's physical form after the destruction ended. Such weapons eventually were looted from the ancient tombs in which they were placed, and have since made their way out in to the world. In the hands of most these weapons are powerful but otherwise normal weapons. In the hands of a Chosen One, however, they become instruments which define the wielder as an avatar of the god, a servant of his or her will.

The story behind the broken sword is one of closure....in this case, the closure of a horrible rift leading to the Abyss itself. The legend says that the sword was used to slice the portal of the Abyss in two, destroying the passage used by the Abyssal armies in the War of the Gods, ending the ceaseless torrent of demonic beings which were assaulting the Mortal Realm. The weapon is usually ascribed to Hermes, who in the Lingusian pantheon is defined as the messenger of the gods and one of the keepers of the gates of the dead, as well as the planar realms. Hermes, it is said, knows all pathways to the planar realms and beyond.

The sword was shattered in two when it sealed the Abyssal portal. Hermes lost the sword but was one of the few gods to retain a corporeal form, moving between worlds as he was able to. The sword's two pieces were left in the material plane of existence, and it was not until nearly two thousand years later that the first half was found by a rogue wood elf in 1,951 AW. This wood elf who was nick-named Wormie accidentally became the avatar of Hermes during a dark time in the history of the Middle Kingdoms. In a lengthy quest Wormie was directed by Hermes to mend the sword and stop the Dark Pharaoh, a manifestation of the Eternal Champion of Chaos, from re-opening the Abyssal Rift. Wormie managed to visit Ashturak himself, the forger god of dwarves, who fixed the weapon and allowed the rogue and his avatar allies to stop the Dark Pharaoh.

In the future the history of the weapon is uncertain, though it is known Wormie held on to the weapon for several centuries. During the War of Strife era (2,086-2,090 AW) Wormie was known to have reunited with other avatars against the threat of the Betrayer King. Later in the 2400's  Wormie had left the mortal realm for the planes and was believed to have taken the weapon with him. By the Warlords Era of Lingusia the weapon's whereabouts are unknown.

The Broken Sword in other Realms

In any setting where the gods have (or had) a physical presence it is possible Hermes forged similar artifact weapons. Hermes is one of the few gods of the Lingusian pantheon to manifest in other realms of existence as a principle god. His sword might also manifest in those realms as well.