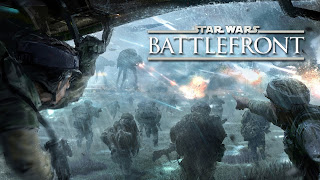 I posted this updated information on the original review page, too, but here's the Star Wars: Battlefront ongoing update I never thought I'd post:

1st, a minor bit....there are ewoks and jawas in the game, but only in multiplayer levels. And I can't shoot them (they appear to be too fast, but are just immune to bullets I suppose).

2nd: I'm upgrading this to a A- because since I wrote this I've logged at least 1 or 2 hours a night (every night, plus overtime Thanksgiving; about 20-25 additional play hours I'd say) on the game, sometimes with my son, sometimes with multiplayer, and it not only hasn't gotten old but I'm pretty well addicted to it....neglecting the other multiplayer shooter fare on my plate pretty much entirely in favor of Star Wars: Battlefront. At least part of the reason is because it turns out the formula has more staying power than I thought; I have been mostly playing blast (deathmatch) and dogfight in multiplayer...I haven't even begun to explore the other modes yet.

The other reason really is because--believe it or not--SWB manages to make for a very clean and friendly play environment; you do not see the weirdos* and griefers, at least not right now, and I think it will be hard to see them in the future as the game is very carefully designed to mitigate opportunities for people to be jerks. You can't teabag, spawn points rotate with great efficiency making camping hard to do, if there's chat I haven't been impacted by it, and the game's underlying design is incredibly balanced and efficient. Most importantly: nothing within the game encourages asshattery, either; you do not have characters cursing at you for "not stepping up your effin' game" like they do in Black Ops 3, for example. This is the cleanest and most enjoyable, relaxing yet fun shooter I've played in years.

Anyway, I'm Tyranosaur on the Xbox One if you're interested.....and yes, I'm actually still pretty good at this game; I've even placed top three on occasion, or hit one of the mentionable milstones. This NEVER happens to me. I'm usually my team's handicap.

The game still needs more single-player modes. My son seems delighted with it, but by all the gods please get more single player and local co-op options going so my son and I don't keep playing the same modes over and over!!!!!


*Weird name still there. Buttmuncher253 has pwnd me a few times, as has bluntbutts and so forth. And yet ironically I have been able to turn the tide on these guys in the game, something I'd never have been able to do in a Call of Duty title.....