Deluxe Tunnels & Trolls: An Introduction to the Nether Realms of Altavir

Now that I have DT&T in my hands it's time to start plotting a setting and scenarios. I can't just recycle something that has come before....this book has a lot of cool new ideas I want to use, and I need a fresh home for them. To that end I now start with...the Nether Realms of Altavir. I'm going to focus on "three interesting things" in each entry for this series...a historical bit, a person/being and an item/place. 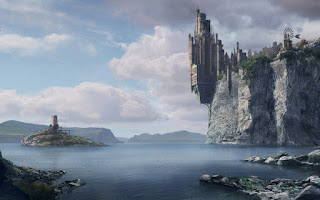 The Nether Realms of Altavir

The Straights of Acutum are a focal point between to divided lands. Southward lies a sprawling mercantile empire uniting the seven provinces of a great dynasty along the D'oro Sea. from there you reach a vast no-man's land, where the Ugadan barbarians prosper despite the constant intrusion of the orcs, the anger of the elven cities in the deep in the Elemental Wood, and the great swathe of ancient ruins that run the length of the Straights of Acutum, ruins which no human believes was forged from ancestral hands. The Vidari call this the Abandoned Lands....the Abandonato Terreno. Stranger beings, such as the skeletal nether and the demonic in'forje occupy many of these ruins and are quick to kill explorers. 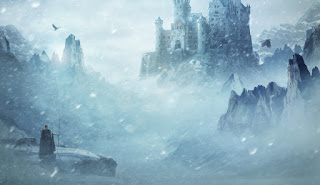 Beyond the vast barbaric dominion along the length of the straights lies the collective known as the Winter Kingdoms, which stretch deep to the north, a collection of loose city states and kingdoms forged by a common identity, resolute against the ever present winter that buckles their lands in to a long, narrow swathe of territories that are constantly skirmishing or at war. Only the brutality of the barbarians, elves and monsters that lie between Vidari and the Winter Kingdoms keep them from descending to war.....and so a place like Port Vadan keeps up a brisk trade between the north and south instead, as its daring captains have learned the treacherous waters of the Straights of Acutum well enough to insure that anyone who wishes to journey north or south must depend on them to survive the trip.

Meanwhile a secondary trade has risen up: Port Vadan has become home to antiquarians and explorers, going hand in hand as they seek out the legends and mysteries of the Abandonato Terreno, and to learn more of the ancient lost empires buried in the deep wilderness. But the orcs, elves and barbarians are loathe to give up these secrets, and are deeply mistrustful of outsiders. Adventure in this region is supported by the port and a handful of hearty young nobles who have heard the call of King Teneren in the kingdom of Vormanse, to carve out baronies in his name and to colonies the no-man's land. Any warrior who claims a plot of land in the south, King Teneren asserts, can take a barbarian wife if he so desires....he just has to survive the experience. For the land-starved men of the Winter Kingdoms this sounds like a pretty sweet deal. 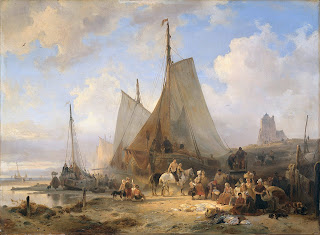 Plying his trade as a mercenary of the straights, Dregatis Ascalair is a soldier and explorer when time and madness permits. He has journeyed twice to the ruins of Hapath, where the nether rule and worship a strange being called Kazak the Unbidden as if it were a god. Dregatis is more than willing to serve as a guide to Hapath, though the coin must be right, for on his second journey he acquired the weapon he called Blood Dancer, a blade which sings as it slays. He took it from the hand of a nether war priest, and knows that the next time he goes to Hapath they may well seek to slay him for his actions....but the lure is too tempting to resist, the coin too great. Plus....Dregatis cannot resist an effort to find out what Kazak the Unbidden really is. 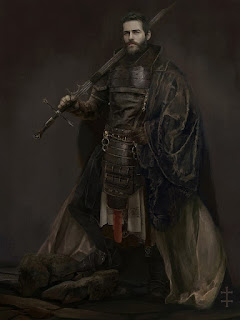 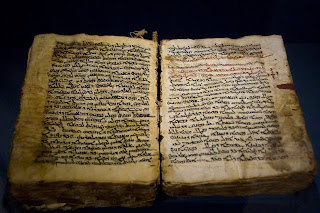 The Codex of the Hapathic Sequence

Written by the mad monk Durthenes, who dwelled in the High Tower of Callidamos for nearly a century after he claimed to have been visited by the Vapari god Soragul in person and was revealed the secret of immortality. Durthenes wrote several tomes while isolated in the famous tower that doubles as one of the more prominent manned lighthouses along the Straights of Acutum, by his fellow Monks of the Yellow Cloth. The Codex is one of the more famous ones, however.

The story goes that a nether woman named Atrissa visited Durthenes each night and told him stories about the ancient people that founded the ruined city of Hapath, and of their decline and fall from greatness. He carefully relayed each story into his tome, along with her meticulous descriptions of the seventeen devils which the Hapath worshipped like dark gods. For each, she said, there was a hidden summoning stone and the scholar-wizards of Hapath could not resist the power of these ancient beings, until at last they brought ruin on their great city. The book, it is said, shows where the seventeen summoning stones still lie in the ruins of Hapath and also how to activate them.

Careful study of this book will give adventurers a chance to learn a new language (Ancient Hapathic) on a level 1 save vs. IQ after 3D6 weeks of study. In addition, the tome includes the complete manuscript to learn the 4th level spell Protective Pentagram (if you can cast magic, that is). Finally, there are many hidden codes in the book. Anyone who reads Hapathic can spend 1D6 days studying the book to make either a level 2 Save vs. IQ or LK might in that time discern a hidden code pointing to one of the following: (roll 1D6);

GMs should then roll a D6: on a 1 the information is false and planted to lead into a trap; on a 6 it is out of date and the location is either looted, occupied by monsters, or its contents/location is in fact somewhere else.

Email ThisBlogThis!Share to TwitterShare to FacebookShare to Pinterest
Labels: deluxe tunnels & trolls, DT&T, homebrew, it's a sickness I know, yes yet another fantasy world