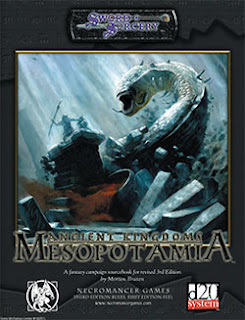 This was one of the best 3rd edition era supplements ever made, and easily converted to Pathfinder, S&W or 5th edition --or with a bit of work you could use it with For Gold & Glory, which recently became my favorite OSR game, but more about that later.

Anyway, it's a setting book set in ancient fantastic Mesopotamia, a sort of Howardian take on the mytho-historic realm as it might have been, with several fully loaded scenarios sufficient for a great campaign and plenty of details on Mesopotamian deities to boot. It's not precisely a historical book, though it is set in a version of the actual historial realm of the Tigris & Euphrates river....more like an agglomeration of the most interesting bits combined with the sensibilities of its time. The book was ahead of its time; this could have (and should have) been released as an OSR tome later on. Anyway......$2 for a PDF today only, so check it out! Use the code DD-AKM-1559
Posted by Doctor Futurity at 8:00 AM