GM Dedication and the ease of game prep time 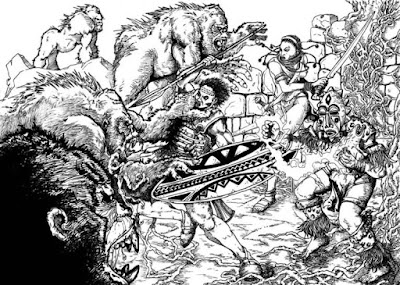 So here's the situation: I started thinking about prepping for a new Pathfinder campaign. This led to an initial moment of excitement, then gradually dwindled to a series of increasingly odd headaches and phantom pains that I realized were due to the painful conditioning of just how onerous and problematic the task at hand was going to be.

In the time it would take me to stat out one interesting NPC or opponent for Pathfinder, I could produce a dozen 5E foes or two dozen S&W or C&C foes. In the time it takes me to properly read up on the player's choices of race and class I could completely learn two or even three entire OSR game systems from cover to cover.

I feel bad. I know my players want variety....they want weird classes with weird options; they are all burned out on the same core classes in every iteration of D&D. Something like Class Compendium can't interest them because....despite the fact that my crew is largely of the right age for the OSR crowd.....they still crave more complexity as players. But Pathfinder does not offer what I as the GM need, which is less complexity.

I could wing it all....and may end up doing so.....but I don't know about you, but that usually leads to a less satisfying experience with Pathfinder. I mean: why run a game that requires short cuts and concessions as the GM to find time to prep and run for, when you could play a game that actually designs the GM experience to be a streamlined, smooth process to begin with?

I haven't got any good answers yet, other than to push hard to keep my current 5E game going on Saturday for as long as possible....stall any change! Yeah, that's the ticket.....

If I stall long enough maybe Paizo will release Pathfinder 2E, now with 200% more player-friendly crunch and 50% less GM prep time requirements. I can dream, anyway!
Posted by Doctor Futurity at 6:00 AM