GURPS and Fantasy: a Tour for the Uninitiated 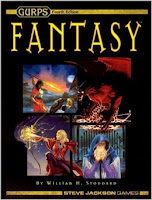 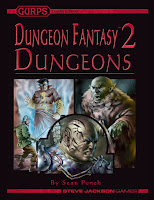 GURPS has two flavors of fantasy: GURPS Fantasy is a wonderful sourcebook for how to make a deep, meaningful fantasy realm that might truly be inspired by the wondrous epic fantasy novels that fill our shelves and e-readers to the brim. Then there is Dungeon Fantasy, which is the flavor one gets when you grab GURPS Fantasy and spike it into a mosh pit of Mountain Dew, Cheetos, and Frazetta painting blended into a thick slurry of awesome.

So yeah, a lot of choices. There’s also “historical fantasy” which works really well in GURPS, especially if you poke around with GURPS Thaumaturgy to get exactly the sort of quasi-historical magic system you would like to play with. The point, of course, is that you can do a lot of interesting fantasy with GURPS in this genre.

GURPS Dungeon Fantasy is ostensibly all about a quick and dirty way to kit out regular GURPS for some craziness. Hidden within the madness is a metric ton of stuff that, while regarded as entirely whimsical and not serious by certain GURPS standards (including Kromm, the author!) is seen as serious bizness when you come from the Dungeons & Dragons side of the spectrum. Want to make a tiefling paladin/rogue? Easy enough, make a half-spirit infernal holy warrior-swashbuckler. Dungeon Fantasy was carefully designed to emulate D&D in spirit and form.

However, the timbre and approach of GURPS Dungeon Fantasy is not quite on par with the actual GURPS Fantasy book, in which 100-150 point characters are normal (DF starts with 250 points), and the notion of deliberate min-maxing in the tradition of the D20 era of D&D is anathema….or at least discouraged in favor of more realistic character building. This can be problematic because…well….all the COOL stuff is in Dungeon Fantasy, and the GURPS Fantasy tome only provides a modest medley of templates, races and other features, topping it off with a tepid but sorta fun “fantasy Rome but with dinosaurs” overview. Plus the Dungeon Fantasy line is the only 4th edition resource for GURPS that even tries to offer some decent monsters and other fun stuff for adventurers.

Some of this is due to the problem with GURPS as a generic, universal system: its built to do everything, but in the process “everything” isn’t necessarily universally represented in the game’s body of resources. As a result, we have in 2015 a universal game system with one very good book on literary and historical fantasy, and a vast swathe of PDF resources on how to kick down dungeon doors and beat monsters up in contrast. So what should one do with all of this?

Don’t dismiss Dungeon Fantasy just because the subject is a deliberate mash-up of Dungeons & Dragons, and don’t take Kromm too seriously when he disses the genre even as he creates a masterful utility to run dungeon crawls in GURPS. They’re up to sixteen sourcebooks now, and the most recent ones (Wilderness Adventures and Henchmen) actually look at more normalized, gritty templates (which work well for henchies or low-level dungeon crawling just fine) and the Wilderness Adventures book even dabbles in what amounts to wilderness sandboxing. So the DF line is pretty diverse, and I would suggest poaching from it as much as you feel like you need to flesh out your regular GURPS Fantasy games, especially if you really want to have a more measured experience without as much gonzo. Use GURPS Fantasy to set the feel, but pillage the hell out of the GDF line to get all the weird races and concepts that make a good game setting come to life.
Posted by Doctor Futurity at 6:00 AM