Three races that could have come from from Outer Space

Three races that could have come from from Outer Space: 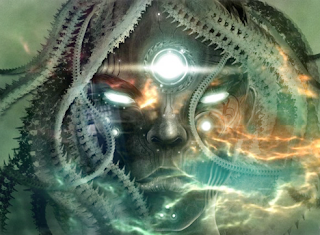 Medusae - the serpent-haired race is only occasionally mistaken for a cursed breed of humanoid that angered the gods. The medusae are in fact the descendants of a crashed ship of aliens from the Serpentis star cluster, specifically three worlds: Medusa, Euryaile and Stheno. The three worlds bear the names of the three "first sisters" of mythology, but are in fact the homeworlds of this ancient race.

Today most Medusae have forgotten their stellar origins, but a few of the sisterhood still recall their roots, and seek to find a means, perhaps via teleport gate, to return to their lost homeworld. Their numbers dwindle; long ago they conquered aging and disease, but they require special subjects to provide genetic material, and their natural defensive ability, which petrifies most bio-organisms, prevents them from utilizing the local genetic stock. Certain experiments to create the maedar have proven partially successful, but appear to be a temporary stopgap at best... 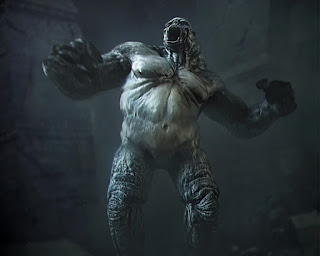 Trolls - the rubbery race of semi-aquatic fiends are actually descended from a pestillent species which conquered half the galaxy. Trolls aren't just weirdly alien because they are creepy monsters: they are in fact a terrifying species which prospered in the depths of space, conquering world after world in the name of the Cosmic Witch Queen and her invincible army of organic world-ships.

Today, on remote backwaters such as the homeworld of your adventurers trolls are a relic race, the stragglers of the vast army which may have passed through here long ago, leveling the entire civilizations of a vast interstellar society in the process. Luckily they are bred with limited intelligence, and readily forgot their heritage....a failsafe by the witch queen's geneticists to insure her own army does not get too clever and rise against her. But every now and then a troll is born who remembers, and in turn recalls that there are still ancient ships of war capable of traversing the stars....and that one might be buried away someone in the kingdom. 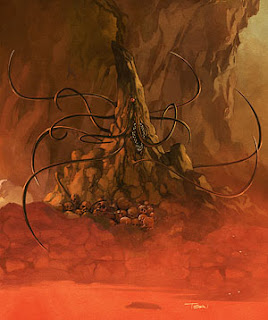 Ropers - the hideous trunk-like, tentacled beasts were once native to a distant world with a deep red sun, horrible monsters which preyed on the humanoids that dwelled in desperate subterranean cities relic habitats of a bygone era when their great civilization attempted to prepare for the destruction of their world at the hands of its own star. The ropers were a animalistic, predatory race, and one habitat in desperation sought to activate a lost generation ship. The ropers were to be left behind...but seed spores clogged the nooks and crannies of the ship, and the colony vessel carried the roper spore into space as it fled the dying world.

Whether the ship crashed (or landed) on the backwater world of today's adventures is unknown, but what is known is that the roper spores arrived, and rained down on the world today. There is at least one mad scholar-mage with a telescope who looks to the sky and points out one of the closer moving "planets," contending it is the mysterious ship of aliens which arrived, settled in to orbit, and then went silent...the ropers (and other hideous beasts) having consumed the crew of the ship before they could escape. Of course, he argues with his rival, who says that the survivors did escape to form the people of the land today...and that only the desire of the ropers and their kin to avoid sunlight keeps them once more beneath the earth, safely away from the surface.