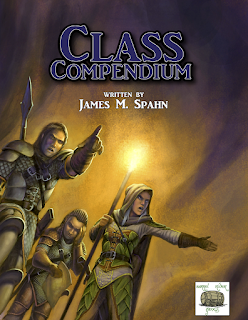 The Class Compendium from Barrel Rider Games is at last available in a print format. As I understand it this is a compendium of prior classes which were sold individually, although it looks to me like there's a whole lot more in here....235 pages' worth, in fact. It's available in print and PDF for $29.99 or PDF only for $9.99. If you do a lot of OSR gaming, I suggest a print copy for the table.

The Class Compendium is aimed directly at Labyrinth Lord but as with most OSR content you can adapt it with minimal fuss to your preferred brand of retroclone (or just use it straight up with B/X D&D). Here's a quick run-down on the book's contents:

That's a lot of stuff --52 new classes in total. What you get here is sufficient to provide a lot of flavor and thematic focus for any LL or B/X style campaign, and most of these classes (barring the racial classes) can be used as-is with Swords & Wizardry or OSRIC. The fact is....you could provide this book at your table, and baring specific setting limits (i.e. no monster or evil classes) you could readily end up with an entire table that does not contain a single one of the core classes in your campaign.

Without actually playtesting each class it's hard to comment on their mechanical viability, but each class I've read has distinct features and qualities to make them stand out from just playing "core." Nothing in particular looks overbearing....although I imagine you might not want to let someone roll up a death knight in your otherwise vanilla dungeon crawl, unless they plan on being the villain.

You could pick and choose classes from this book as well to flesh out a campaign idea: steampunk games, monster-centric games, urban adventures and even a setting focused entirely on non-magic users could be well supported with this book. The idea of a Lost Boys style Peter Pan adventure in Neverland is intriguing, too (sorry in an earlier blog I suggested you could to Alice in Wonderland due to a momentary brain lapse, I meant Peter Pan!)

Class Compendium also wisely avoids vampiric classes (which suffer in every iteration of D&D I've seen), although the damphir is done quite well.

Oddly there's only one east-Asian class here: the samurai. Perhaps a future tome will add the shukenja, wu-jen or kensai types that would let one flesh out a proper Asian fantasy campaign. Elves are another exception in this book: you get four new classes, but only one is a themed class (greensinger), whereas halflings get five unique classes and dwarves another three. So we now have "dark elf" for example, but no "dark elf ranger" or "dark elf matron" or even something like a bladesinger.

There are also a lot of spells....a huge number in fact, but many are reprinted from LL, adding the additional details necessary to support the classes in this tome. As such, if you have a spell casting character from this book, you can also use the Class Compendium to manage his spell lists.

In terms of style and art, the book is utilitarian in design, easy to print out if you choose not to go with a POD option, and the art is a mix of creative commons, royalty free and commissioned art....all of it looks good, nothing offensive or tonally off.

If you're like me and always felt that the racial classes of B/X D&D were the major stumbling block to properly enjoying the game, then Class Compendium definitely helps fix that. If you like diversity in class options, this book is for you. My advice is: get this, you will find it well worth your investment. A+
Posted by Doctor Futurity at 6:00 AM