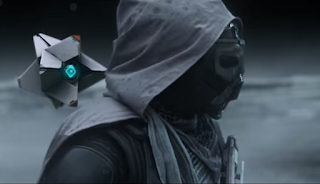 The opening salvo of changes to Destiny have hit this week, including a revamping of the leveling process, the way you accrue light levels, and all sorts of stuff. Most pronounced was the eradication of Peter Dinklage's voice (retroactively) as the Ghost, your ever-present floating robot companion who likes to explain stuff to you. In his place is now Nolan North, veteran and beloved voice actor. And....oh gods, it's like C3P0 and 343 Guilty Spark (of Halo) had a love child.

Let's just say that I miss the Dinklebot.....sigh. Unlike much of the interwebz I always did like him, but I happen to also be fond of Nolan North's work.....so I had high hopes....and yeah it is okay (tolerable, at least) but Dinklage had a nice, neutral yet caustic tone that really fit well. Nolanbot sounds like a whiny, effete Guilty Spark. He really does.

So I guess....thanks Bungie, you've officially pulled a "MMO expansion" move on Destiny players. I look forward to pining for "Vanilla Destiny" in the distant future and reminiscing about how awesome Dinklebot was in hindsight. Or not.

Forbes has a great article on the real problem: a narrative from a robot with no foil to the dialogue.
Posted by Doctor Futurity at 11:29 PM