Devil is in the Details: high concept Raiders of the Lost Ark Style Gaming in Pathfinder 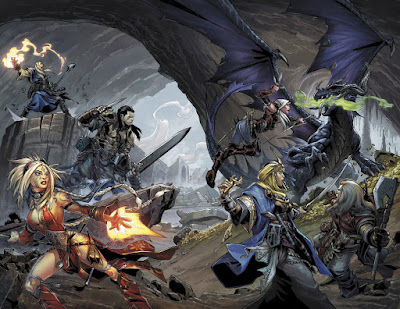 Actually, the situation which prompted this musing is the reintroduction of Pathfinder to my Saturday night routine. After the high-level 5E game concludes (possibly in one more session) we're gonna start a new Pathfinder game at level 3. It's set in my Enzada setting, which was effectively built from the ground up with Pathfinder in mind. It's also the setting that uses the following concepts as key building points: too many gods to count, all non-western fantasy based, and rife with exploration and Indiana Jones-esque adventure themes.

Going back to Pathfinder has left me certain of a few key things I want to avoid, if at all possible:

1. no dungeon slogs. I'm not burned out on them, but returning to the methodical minis+map methodology of dungeon crawling is making my skin crawl; put another way: 5E handles the dungeon crawl better I feel

2. mitigate the maps and minis; use the "lessons" of 5E (by which I mean: the deprogramming back to a kinder, gentler era before 3E that 5E has helped us to remember) to make Pathfinder's battles run more smoothely and without the need for rigorous application of locational grid mechanics.

3. Speed it up....a lot. I have a confession to make: I have an unnatural fondness for overland travel and encounters. I like hexcrawls, and as a player that's my default state. Hell, as a DM that's my default state. But I'm doing hexcrawly stuff all over the place in my 5E games right now, and Pathfinder is just mechanically slower when it comes to this stuff. This leads to #4....

4. Focus on the big stuff and use the "Red Line of Travel" to get there. The Red Line is that path the plane takes on Indiana Jones's maps in the movies, where he managed to go from Tibet to Egypt in ten seconds without an array of random wandering nazi encounters. The principle here is the same: don't do travel stuff unless it's important, and don't do encounters unless they are worth reading about. No trash encounters, basically. Those familiar with D&D 4E should be familiar with the concept: the entire game was self-aware of the fact that trash encounters slowed everything down to no discernable benefit. I'm coming back to Pathfinder with the same general notion....an encounter ought to be significant in some way to the plot, or the direction the PCs have taken. If it isn't, scratch it.

One of the reasons for #3 and #4 aren't system related: it's tied to the fact that my Saturday group only meets once every other week for the game, and even then every third or fourth meeting gets skipped due to scheduling issues, so we probably have only 20 actual sessions in a year. Given that we only have X number of sessions, it makes sense to tighten up the plot/narrative a bit and focus on the cool stuff.

This focus on the cool stuff can be hard though for someone like me who tends to run freeform, open-world exploration games which are while not technically hexcrawls (because I use regular graph paper) are still ultimately a variation on the same concept. If my party of adventurers are all in the city of Uralhat, for example, I need to be equally prepared for if they sail off to the port of Syrhaba to investigate the haunted monastery or if they forge inland to Sholtira to find their cohort's missing father. The idea is that.....whichever direction they go....I will promise myself not to make the sea voyage or overland voyage last a session or two just because travel and exploration are fun. Sure, it is fun....but if we want to resolve a plot or two in a dozen sessions or less it's a good idea to gloss over the minor stuff.

Of course, I could be wrong....and it might be worth talking to my players. Maybe they love traveling. Maybe all they want to do is explore the Emerald Spire Superdungeon or something. But part of me really loves the idea of running a Pathfinder game (or any other game) at the breakneck pace of Raiders of the Lost Ark, with periodic locational transitions that happen narratively in the blink of an eye. Anyone else tried it this way? I know I used to run ALL of my games this way back in my 2E days in College....but when I was in school I had to build all my campaigns around the semester, because I had no guarantee my same players would be back at the end of that semester. 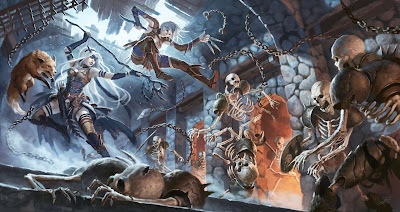 All that aside....and despite my head swimming at the layered complexity of Pathfinder once more....I am really keen to play it again, if only for a single campaign, with the right group (of regular players who don't power game). Pathfinder is like a glorious encyclopedia of fantasy, full of everything, and all you need to do to unlock it's secrets is dedicate your every waking hour to deciphering its mad secrets. There's something freakishly compelling about that.