The new Traveller is loose and in playtest phase

Mongoose has released Traveller's newest edition this weekend....or more accurately it's playtest edition. The details are here, and the PDF of the playtest doc with goodies is on rpgnow. It comes with a $20 voucher toward the final product, so I imagine if you want to be in the playtest and are certain that you'll want the final product then this is a good bet.

The new cover design is interesting....as is traditional for Traveller, after every "black cover edition" we have to have a period of flashier covers. Check it out: 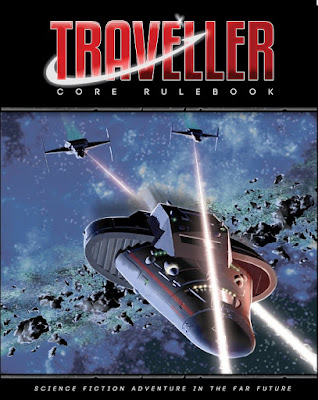 At a glance, here's what changes the new Traveller brings:

1. A shift to modern graphics style and art (a shift away from the minimalism of the MGT book and CT)

2. an emphasis on integrated design....as an example Matt points out how High Guard was usually designed after the core ship rules, as an add-on; now they will design the whole starship system and then derive the basics for the core book from that instead.

3. Lots of tweaks. I see a mention of integrating the combat mechanics with people, ships and vehicles to work the same way....I think this would be great, will have to see how it works in practice though.

4. Boon and Bane dice added to skill checks. Not sure how this works in play, but this guy didn't like it. I'll have to wait to see if I cave and buy the playtest packet to determine for myself if they are a worthy addition.

...There's a lot more, but click this link to read about it directly. Mongoose is trying hard to show cred in this process, including who the playtesters have been so far. I'm eager to see how Traveller works out for this new edition, even as I concede that Mongoose's reputation for editorial issues, spelling and errata make me nervous about buying in to a new product from them.* The final product is scheduled for an "early 2016" release date so....not too much longer to wait!


*Still, fool me once, shame on Mongoose; fool me fifteen or more times and shame on me.
Posted by Doctor Futurity at 10:00 AM