You could actually pull a random selection of classes from the Class Compendium and core rules to make thematic campaigns pretty easily....try it! Here's a random generator to get you started....roll 3D6+3 times on the chart to get a selection of classes, then imagine what sort of weird campaign would result in an adventurer selection like that. I've added the LL Advanced Edition class options as well for extra fun:

Campaign by Class Generator:
Roll 3D6+3 for # of classes available (or roll 2D6+3 or even 1D6+3 to limit total choices). Then roll D100 that many times and determine class options from the following; re-roll duplicates.

Special Option: Default Core--if you roll a class under one of these cores (marked in bold) then you include the core class in your list (i.e a knight option will de facto include fighter).

So...what does our class selection tell us about our new setting?

Core classes allowed are all there (fighter, magic-user, cleric, thief, elf, dwarf, halfling) so that's good. But some clerics can in fact be angels, druids and undead slayers. Fighters could also be monks, knights or samurai, and magic-users could also be alienists. Halflings could be feast masters, while dwarves have a special group of raging slayers in their midst. This world has some interesting implications!

2. There's probably an east-Asian setting or something comparable, which is where the monks and samurai come from.

3. maybe the dwarves use their raging slayers to stem the tide of evil that the alienists also seek to harness?

With this idea, I envision a setting where magic is generally accepted, but the world is threatened by alien forces..the Old Ones, perhaps...and some mages have learned to harness their magic as alienists. This threat is pervasive; the forces of good have even called upon angels of their gods to defend the world from this evil encroachment beyond the stars.

Amongst elves, they stand resolute and quiet in their woodland kingdoms, while dwarves have an entire culture of raging slayers dedicated to fighting the monstrous evil which is most likely to manifest in subterranean realms. Haflings remain an innocent and prideful folk known for their food, especially with their trade as feast masters.

The human kingdoms of the west (sure, why not) are dominated by a feudal society of knights. clerics and fighters; an entire special order of undead slayers has worked long and hard to stop the encroaching undead that are a byproduct of the Old Ones' manifestation. To the east is an island kingdom of isolated but powerful warrior samurai and their enclaves of militant monks. Thieves are everywhere, of course, that there is civlization. Lastly there is an old way, the pagan beliefs the druids vehemently adhere to with their elven allies. 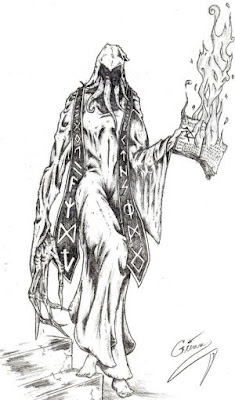 For this one I go limited (1D6+3) and exclude core classes except if it makes sense. I roll and get 8. For the classes I roll D100 and get:

This is a world without demihumans...except for half-elves. I'm excluding regular elves (so no core classes that aren't rolled), which means in this world elves are an aloof mystery race of fey who are unsuitable for mortal minds to play as characters....but the idea of half-elves being viable is cool, so they are the product of baby-swapping unions with elven fey and humans; half-elves in this world are changeling, essentially.

Mages are limited to illusionists and alienists....this is a world where magic is either insubstantial and limited to the trickery of illusion and enchantment, but real mages go for broke and contact alien entities to secure their powers.

For fighter types we have the shootist, ranger, watchman, fighter and commander....this is suggestive of a magic-light world, one in which swordsmanship and a brace of pistols make right over magic. I'm inclined to allow thieves in to the mix as well, but for now, they can sit this one out (thieves exist, just not as honorable adventurers unless a player convinces me otherwise). There are no noble classes, either: this world is a rough place, and it is likely that skill and determination make a man rather than bloodline inheritance.

The shootist suggests a higher level of technology, which could play into the weak magic idea; magic is no longer a force in this world, or never was, but alchemy has turned in to chemistry and engineering for many, leading to a renaissance period and the development of more efficient and deadly weapons. Watchmen are another interesting idea: in this world they may be the ordinary men and women who not only look out for thieves and cut-throats but also keep a vigilant eye for the evils of alienist magic or the ever-dangerous fey which steal children and bring them back "touched."

Rangers meanwhile remain a "wilderness" version of the watchmen.....looking for the monsters in the wilderness that might rise up to destroy remote settlements on the edge of civilization.

Best of all, this is a world with no religion or gods of any import: there is no clerical magic at all! With no PC clerics or healers, the world really is a grim land, a universe where whatever gods are worshipped are uncaring and bequeath no power to followers. The alien minds the alienists reach out to for power may be as closes as it gets....and even they may find little interest in this universe. Or...maybe they have already destroyed the benevolent gods of this realm, and quietly bide their time for when the world is ripe for their cosmic arrival at the end times.