In responding to a question about it at rpg.net I realized I ought to put my answer on the blog for anyone interested in this PDF: 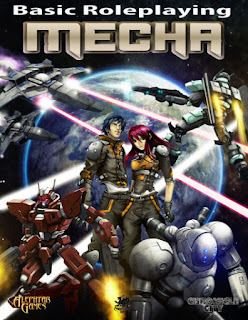 I bought the PDF of BRP Mecha yesterday, plowed through a good chunk of it last night. So far it's a good read, and has a decent set of build mechanics for making mecha of the "super" and mundane variety (Voltron vs. Gundam, essentially). It's got a short campaign setting and scenario in the back. The core conceit of the mecha rules is a matter of taking the BRP rules and scaling them up to "Mecha scale" which is a 10:1 vs. normal BRP scale in terms of translation (so a lot like I recall Mekton Zeta handling this).

The game has a lot of cool build options for mecha, but does not work on a point-buy system, favoring a "setting driven" design approach instead: build to need, essentially. This is about on par with the BRP philosophy. It would have been nice if a point buy option had been included for those GMs who wanted to run a campaign where players have direction and control on building their mecha, but the design goal of a pointless design mechanic was to discourage an obsession with balancing everything (which runs counter to the thematics of most mecha anime, I suppose). 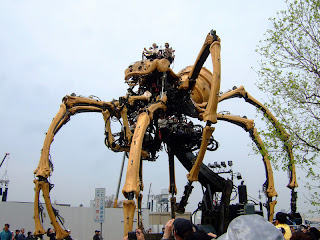 The character updates are a bit leaner, but it adds new skills, a discussion of the different poweer categories as they relate to the mecha genre (psionics, mutations, super powers, magic), rules on motivations, and fate points (which function more like hero points in other games as get-out-of-jail" points you spend to avoid distaster and do cool stuff). The fate points add a cinematic flair and help avoid the "brutal, senseless death" element BRP can be known for.

Artwise it's alright, with a decent cover and lots of anime-flavored black and white interior art. About the same level as old Mekton books, I suppose. Overall editing appears to be good so far...I'm no pedant, but I also haven't encountered any measure of unusual typos or evident errata. The book's design is nice looking, although black-bordered side bars might be printer ink intensive for those who print out copies of their PDFs.

Throughout the design of this book I felt there was more than a little Mekton influence showing. It reminds me of what I might imagine Mekton would look like had it been designed for BRP. That's not a negative. 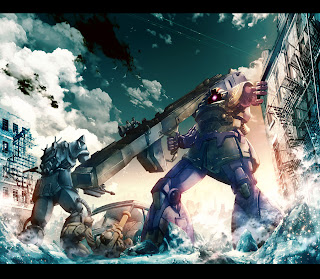 The book did lack content for character-specific features (new human equipment, for example) although it has detailed vehicle rules. It lacks specific material on introducing cyberpunk or transhumanist material into games, which often go hand-in-hand with mecha anime these days, so you'll have to lean on powers in BRP (with advice from this tome) to construct such content.

One omission: while it has a mecha sheet in the book it's missing a custom BRP character sheet. With the additional skills and fate point rules a customized PC sheet would have been handy.

For me, this is the sort of BRP sourcebook I've been really hoping would come along, with a good SF focus, and a shift away from fantasy and horror, which has dominated BRP resources so far. I hope it does well and motivates Alephtar to publish more cool SF-related BRP material in the future. I am enjoying it enough that I am already planning a campaign. 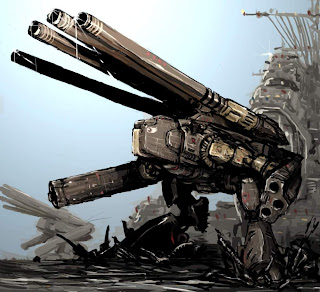