It's nice having a kid now, even if I'm a few years behind the curve because it means I have a better context of understanding for things like this and this over at Penny Arcade. Tycho and Gabe (author cyphers for Mike and Jerry, the real dudes behind PA) ponder the horrifying realities of child rearing in the age of the internet and Xbox Live Chat, and Gabe in particular suffers a meltdown about a little girl who loves Slenderman.

This touches on several interesting phenomena that I have noticed, both as one of the unfettered and one of the very-much-fettered parents...and I have no doubt as the years creep by my perceptions will shift even more, suffer greater challenges, and ultimately go through a process of metamorphosis into something entirely different from what I can conceive of right now.

Chief among those phenomena is the problem of "me as a parent" and "all those other people who are bad parents." It's a real thing, and I bet anyone with kids has noticed it from both sides: what you are doing as a parent, and what you know must be done as a parent is inevitably different from what other people are doing as parents, and more importantly what you think people should be doing as parents. You've probably scrutinized other parents....but just as likely, and with an equal level of bravado I bet at some point you've had to defend your own parenting actions from other parents (or in my wife's case our own parents, alias grandma and grandpa).

When I was about eight years old my dad took me to see Alien. My sister was along for the ride, too iirc, and that means she was about 6. The lasting effect of this discovery was that I developed a deep and profound interest in the horror genre later on in life, and an unaccountably obsessive interest in all things both horror and science fiction. It was mind expanding for me, even as I sat through the horrible bits of the movie, but it was worth it. My dad probably just wanted to see a good sci fi movie and lacking any easy sitting options (we lived in a very rural area so visits to the city were infrequent) decided that it was worth seeing. Plus, and it's easy to forget this, there had up to that point been nothing even remotely like Alien on the big screen by 1978. Gruesome horror films...Hammer horror? Sure! But a big budget, well conceived, thoughtfully designed and executed SF film that also grappled with fear, terror, horrific imagery and still managed to make a cogent, smart story out of all of it? That was a rarity. If anything, seeing that horror film first made it simultaneously a much more difficult quest for me later on to find and enjoy other horror films because so many paled in comparison. I had the bar set high at a very early age, and as a result my subsequent obsession for such films as I got older was difficult to overcome. 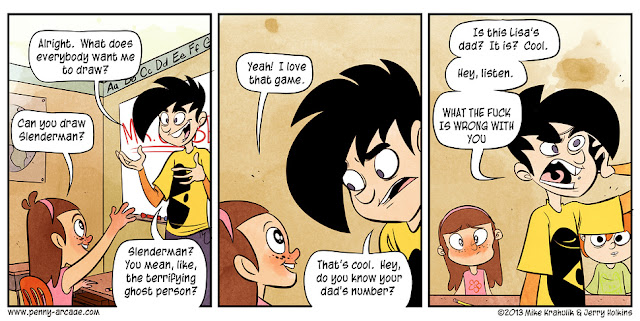 So it is with this memory of my own experience in mind that I read the Penny Arcade cartoon with great amusement, because I've played the key Slenderman game (the one where you find these sheets of paper scattered around while trying to stay away from Slenderman) and it's frankly no worse an experience (and perhaps even slightly better) than Alien was to me at eight years of age. This isn't necessarily the sort of thing I feel a child needs to be sheltered from. If you seek to pad your child from all negative emotions, experiences or life lessons then you will create a child who lives in a bubble of deceit, and I don't want that for my kid.

Conversely, it is entirely possible that the little girl in the cartoon (who is apparently derived from an actual recent incident) is strictly allowed access to limited entertainment, and that the parents have deemed Slenderman acceptable by virtue of the fact that it contains only fear, and no gore, violence, nudity or other features that are far more typical of the horror genre. As I see it, shielding your child from this game is a bit like trying to shield your child from the evocation of fear entirely....and that's impossible. Not to mention, you're missing an opportunity to let your child explore such feelings in a safe environment, rather than get hit all at once by it in some moment of real tragedy or loss. Learning isn't always just about the good stuff.

When Alien came out it was a terrifying movie to me, but I loved it all the same. My dad bought me the alien action figure (the one which was shortly thereafter pulled from shelves due to complaints by various parent groups) along with the Metal Hurlant-produced graphic novel. It was great catharsis for me, something I could enjoy and escape into, to reflect upon the morbidity of a dark future with alien hunters and survivors, and something I needed as a child. Why? When I saw Alien it was in a world that was being bombarded by real, terrible fear constantly. I was growing up in a world at the height of the Cold War, and I regularly had nightmares and waking imaginings of nuclear war destroying everything. I was morbidly fascinated at the reality I was living in, one which appeared to be capable of being wiped out at any moment due to forces far beyond my ready understanding as a kid. Alien was a sort of fear I could deal with, it was more tangible, and also something I fully understood was imaginary. Adults do not seem to give kids enough credit for an ability to parse out the real from the imagined. It's a big problem, really, in today's modern culture, saturated with people who prefer to look to media influence as the cause of all problems and not their own ignorance.

Then again, maybe I'm projecting too much of myself into other people. Maybe I assume that because I as a kid could tell the difference, that everyone else reasonably should be able to, as well. I sometimes forget that large swathes of our culture have built up an entire epistomology of belief that is designed to thwart reason and analysis.

I digress, though! The point here is that I wonder if I'll feel like Gabe and Tycho in a few years, or if I'll be able to recognize the difference between being a mentor and a parent, instead of a shield and a defender of the fantasy of childhood innocence. We need to protect our kids, yes....but from real threats, not fantasies.