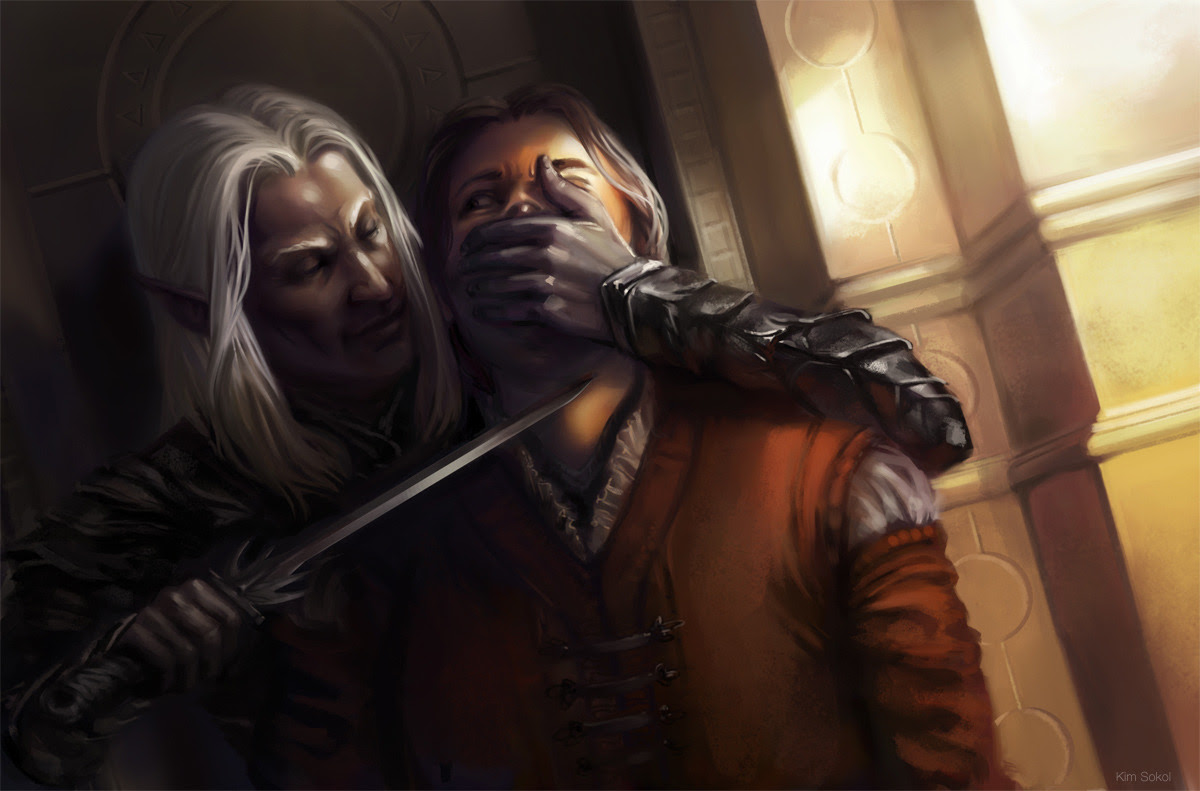 The Fire Knives are one of the oldest and most persistent villain organizations in my campaign. As such much of their history has translated from one era to the next, but the core conceit: an elite order of dedicated assassins who revere a god of killers with utter dedication remains consistent throughout the ages.

The Fire Knives (also known as Flame Knives) have long served as the secret assassins and cultists of Haro, the ancient betrayer god, and have remained so to this date. Their cult is indomitable and persevering, and even the grand purge of 1110, during which the king Edelaird of Hyrkania sought to destroy the cult was unsuccessful, for the Fire Knives simply disappeared for a time, only to resurface when once again their dark deeds would prove most nefarious and profitable.

Among the sundry cults and guilds of assassins spread throughout the world, the Fire Knives have remained the most secretive and formidable. Steeped in an ancient tradition of lawless honor, entropic sorcery, and an unyielding dedication to the dreadful mercenary god Haro, the Flame Knives have existed for at least as long Hyrkania has been known by such a name. The origins of the cult are shrouded in mystery and only the eldest, most vile members of the cult are privy to the unwritten tales of their sordid past. To be a Flame Knife is to embrace evil, and to take sides only with your self. Even one’s own allies are considered fodder for the ultimate goal of seeking the divine favor and ascension promised by Haro.

Those who have investigated this cult know some facts, and most successful entry level members of the Fire Knives also know such facts. It is known that the Fire Knives have hidden guilds within five major cities of the Middle Kingdoms (Capitol Octzel, Eastonia, Hyraphon, Saddikar and Hyrendan) as well as open recognition and acceptance in Golmadras. It is known that the Flame Knives are affiliated, at least peripherally, with similar Eastern cults from as far away as Al’jhira, based on the similarities of their prayers, rituals, and mantras to such other groups. The Flame Knives revere Haro with a fanaticism that precludes meaning in their own existence, but among the fodder a select few seem to be granted visions, in which it is made clear that their true purpose is mercenary, self-serving, and that they are to be the true guiding minions of Haro's will.

What, however, Haro wishes is often confusing. For example, while he was long believed by the forces of order to be a chaotic deity prior to the Reckoning, it was in fact Haro who betrayed his own brothers of Chaos and caused the collapse of the eons-old conflict between the primordial forces. He did so, however, because of the obvious power gap that was created in the wake of the Reckoning, and his cult grew ever stronger as a result. Today, many greater Devonin (demonic beings) and demiurges are now subservient to him, and so therefore are at the beck and call of his mortal cult.

Flame Knives are all about the conquest and subjugation of the world through fear, murder, and capitalism (raw, unchecked capitalism). Many Fire Knives are mercenaries, merchants, and con men of a wide variety. A smaller number are mages, professional assassins, and some even rank among nobility. All believe unerringly in the cause of their illuminated assault on the world, and the secret propagation of fear and chaos as the true means of control in society. All of them selfishly believe that they and they alone, will ultimately be granted favor from Haro and elevated to the rank of spiritual soldier or even avatar at his side. This is a cult of evil, and should be exterminated by all who oppose such malevolence.
Some of the most famous Fire Knives include Cassius Augustus, the undead warrior summoned back from the days of yore to serve Haro as an assassin among assassins, and Lord Celiobantes Astiriate, considered one of the elite Elders, and high lord of the guilds of  Northern Hyrkania. A few suspect he is one of the Ten Who Rule. The House Astiriate has several well known younger agents in the ranks of the order, who are feared by all.

The Fire Knives have an ancient symbol, which varies only slightly from one region to the next. It is always of a shield, upon which is depicted a starscape showing the chief constellations of the Huntsman and the Wolf in highlights. Crossing the shield are a flaming bow and dagger with jagged edges. If the symbol is to be seen as a warning or threat, then the weapons are placed in front of the shield. If it is used as a secret sign or reflects safety, then they are placed behind the shield. All Fire Knives learn a kind of Thieve's Cant, which is comprised of sign language and a sort of colloquial half-speak intermixed with a clever use of odd kennings to communicate with one another.

Fire Knives come from all wakes of life. Disciples of the cultic guilds are necessarily drawn from all strata of life, but only practiced, skilled professionals with a cunning and will to use it are granted entry into the inner sanctum. A Fire Knife can be granted such status from a patron of the guild, but it is also possible for a Fire Knife to prove himself so resolutely that he is granted divine inspiration from Haro, and asserts himself over time and often against the will of competitors. Once in the Inner Circle, rivals who seek his status, or wish to take control of the schemes and plans of another will eventually challenge the Fire Knife. The infighting is constant, and only he who surrounds himself with the best lackeys and defenses is likely to make it to the top. No one knows who the ten members of the Elders are, called the Ten Who Rule, and the leader of the Flame Knives remains a whispered mystery to this day.

Player characters who seek to join this order often do so at the risk of earning the ire of their compatriots should they be discovered, and areoften sworn to secrecy from revealing such membership by the order, even to those allies.
Posted by Doctor Futurity at 6:00 AM