Sigh....I think I, and everyone else who plays Rift, expected this to happen sooner or later. Rift will be moving to a F2P (alias "freemium") model effective June 12th. Existing subscribers (like myself) will get moved to a "premium member" status as paid subscribers. They are trying to make this sound more glorious than it probably is...my monthly payment has, after all, just been devalued from "actual game access" to "some XP perks and a few other oddities, many of which I bet I already get right now." We'll see. I picked up the one year subscription deal when Storm Legion was in preorder a while ago, so I'm stuck with this model (noting that converting paid subs to premium is a great way to allegedly offer benefits without refunds or handing out much --if any-- cash shop currency).

MMORPG.com has an interview with creative director Bill Fisher here.

My prediction: I'll let my sub run out, because "daily bonuses" don't work for an infrequent player like myself. If I find four or five chances a month to actually play, then non-cumulative bonuses are pointless, and free access becomes a lot more viable. Given that I've already sunk hundreds of hours into Rift and have more than gotten my share of entertainment out of it, though....if the game sours due to the migration to F2P, along with the ubiquitous arrival of the teeming, unwashed masses, then I'll still be content to close out on it. On the other hand, if they successfully dodge the sort of freemium model that Funcom went with for poor old Age of Conan (what I like to call the "pound of flesh" model) then Rift will still have me.

If, on the other hand, I find that the cost of getting even the most basic expansion content is equivalent in price to buying out a small third world country....looking at you, Funcom!....then yeah, I'm outta here. 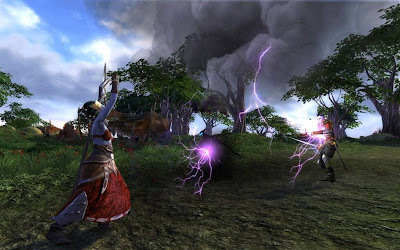