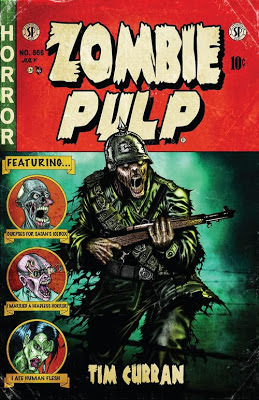 Right off the bat: this was a fantastic read. It might not be for everyone, but if you happen to really enjoy visceral, gore-soaked pulp fiction full of zombies, murder, revenge and madmen then Zombie Pulp is barking up your hangman's tree.

Tim Curran is a prolific author, who has perfected the art of horror fiction, with an especially keen sense of both pacing and a talent for descriptive gore. His zombies are very...meaty....and his descriptions of monstrosities make them hard to forget and easy to visualize. He's got exactly the sort of talent for writing this sort of fiction, and it really pays off.

Zombie Pulp is a rare collection of short stories in that every single tale in this volume was at least enjoyable and worth reading. I rarely encounter a collection like this, where I skipped nothing, it was all captivating. That's pretty unusual. Even if you obsessively read every story in a given collection, it's often with the sense that maybe...just maybe...some of those stories were weaker than the others. Not so here. The weakest tale in Pulp Zombies is still heads and shoulders above the zombified competition.

Here's a run down of what the book offers to pique your interest:

Shelter: A holdout in the zombie apocalyptic wasteland barters with life by offering up victims through a lottery system. Is Doc, the head of the compound, just cruelly earning his own life and using survivors, or is there something else at work here? Creepy zombies with a habit of speaking their mind like undead Torrets victims.

Corps Cadavre: An inmate at a prison gets light duty on the graveyard shift at the mortuary, which is freshly stocked from the latest round of riot victims, heart attacks and more. The problem is, there's a guy who takes that shift and has done so for decades, and he's got a unique way of disposing of the corpses.

Emily: A mother is obsessed about her recently deceased daughter, and seeks a means of bringing her back from the dead. She succeeds, of course, and because this is a zombie anthology there are no miracles involved in this process. Mother spirals into madness as daughter learns what it means to be one of the living dead.

Dis-Jointed: Revenge from the grave as some hit men deal with their victims through a process of dismemberment and burial in the deep woods, only to find that they're next on the hit list.

They Walk By Night: A private eye and a detective run into a problem when recently deceased criminals start popping up again, and they think it might be tied to a recent serial killer that they caught, and who died in prison unexpectedly. Good noir feel mixed with zombies.

Mortuary: This was an interesting and weird tale, written I feel for its obsession with utter and total gore, and a complete lack of interest in keeping any protagonist alive. A Waco-like scenario is unfolding as the ATF prepares to bust into a suicide cult complex that may or may not be well armed. What they get is....zombies, of course. Probably the goriest tale in the book.

Euology of the Straw Witch: A tale of the old west....or maybe just a very economically depressed backwoods town (just occurred to me that the exact timeframe of this tale is a bit ambiguous, although it's definitely sometime before 1940, I'd say), about a man who misses his mother so much he seeks out the help of the mysterious straw witch to bring her back, with the expected results one might imagine in a tome of this title.

Monkey House: A story which answers two questions: first, why not primate zombies? And second, why you should never leave your hardened post-apocalyptic bunker just because it's been weeks since you've seen a zombie. Although the gore level on this one was through the roof, a lot of it involved depraved simian zombies and therefore wasn't quite as disturbing as a few other tales...but that said, this one managed to hold an abundance of excessive grotesquerie.

The Mattawan Meat Wagon: the story here is similar to Shelter (and could take place in the same universe for all I know), this time about survivor towns which periodically load up the sick and elderly and drop them off in the big cities where the zombies have overrun everything. A driver and his rider, a young man, are about to meet some unfortunate turn of events in the course of this action. A pure gore fest, I felt there were some missed opportunities in this story. Without trying to spoil it, the boy who takes off in town just sort of...dies....and I really felt that was leading somewhere, since he was originally from that town. When it didn't, I was disappointed.

Morbid Anatomy: A lengthy novella tops off the collection, focusing on an interesting spin-off from Herbert West's time in the Great War. The story is told in two parts, which eventually converge (while still remaining essentially separate), bouncing between West's aide and assistant Hamilton, who manages to maintain an affect of mild contempt for West's activites with restoring the dead to life, even as he helps support the vile doctor; on the other side if a war reporter named Creel, who has an unhealthy obsession with death and is finding even the Great War or WWI is perhaps too much for him. This was a great tale because not only was it the slowest of the lot in terms of pacing, it was also a bit stingy n the gore. When the zombie element enters the picture, it's in contrast with the horrors of what has already been happening as a recourse of World War I's notoriously dehumanizing and destructive course, which makes for a fascinating juxtapose. When Tim Curran dabbles in Lovecraft his own spin really makes it special (see the Hive series for another example) and this is no exception.

Love gore-drenched zombie horror? Get this book! At times it reminded me of the golden age of EC Comics, brought into the literary medium. If one tried to classify this in terms of current genre form, I'd label it one part splatterpunk, one big part zombie fiction and a dash of Lovecraft for good measure.