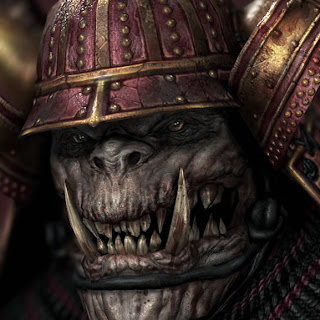 Who doesn't love playing an orc on occasion? In B/X D&D they're the second tier cannon fodder in low level adventures, one step up from goblins and kobolds. A chaotic race of barbaric beast men, orcs may or may not be the byproduct of genetic tampering from an alien wizard, or a long-mutated faction of brutal elves who succumbed to their dark magics. They may or may not be simple neanderthal off-shoots struggling against humanity and the rest of the world. They might even be potent invaders from another dimension, soldiers in an army of darkness that long ago were trapped in the human realm when bold heroes slew their demonic overlords and closed the abyssal gates. Orcs can be (and have been)  all of this and more.

In settings where being an orc is not inherently a sign of evil, or where orcish blood is not an immediate indication you must be attacked, then they might be permissable as player characters. In other realms where orcs are clearly the undisputed foes of civlization, humans, elves and dwarves then a DM might like a nice way to make some exceptionally skilled evil orc NPCs with a few levels under their belts. This class serves both purposes.

Orc Racial Class Requirements: Orcs have some minimums and maximums. No orc may have less than 9 constitution or strength. No orc may have greater than a 15 intelligence or wisdom. Orcs can have whatever charisma they like (but see below), and high-charisma orcs tend to manipulate and control henchmen through force of personality, fear and terror. An orc with a strength and constitution of 13 or better gains a 5% XP bonus for prime requisites. An orc with a further 16 in either stat gains a 10% bonus.

Optional Rolling Conventions: If you want to guarantee an orc, roll 2D6+1D3 for wisdom and intelligence. Roll 8+1D10 for strength and constitution.

Class Traits: Orc adventurers have a D8 hit die. They advance as fighters for purposes of level advancement, saving throws and XP requirements, but refer to the monster attack chart for attack rolls (use level in place of hit dice). Like fighters orcs can use any weapons or armor, although they most prefer the conventional swords, spears, axes and clubs. Orcs are not keen on the use of more sophisticated weaponry such as siege weapons and will avoid using such artillery unless their intelligence is 13 or better.

Orcs have infravision to 120 feet and can see exceptionally well in total darkness. They are nocturnal by nature and intensely dislike direct sunlight. An orc fighting in direct sunlight suffers a -1 modifier to attack rolls.

Orcs suffer from violent, surly and combative natures. As orcs are largely a pariah in human lands, they never gain a positive modifier to reaction rolls due to high charisma against non-monstrous creature encounters. They use the normal reaction modifier when interacting with other orcs and monstrous humanoids, however. Additionally, most orcs are at least chaotic, and a few might be neutral. A lawful orc is a true rarity in most cases.

Orcs start with two languages: common and orcish. Alignment languages, if used, allow the orc to start with chaotic as well. A surprising number of smart orcs will also learn elvish, if only to taunt their enemies.

Orcs may advance to 8th level in most circumstances, but the DM can rule that an orc with 16 or better strength and constitution can reach level 12. 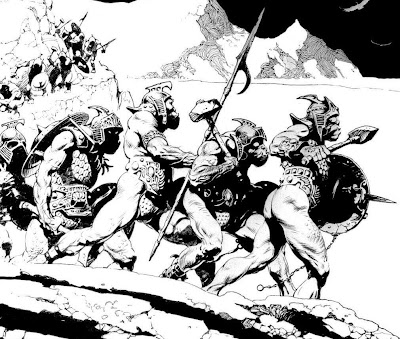 Spraggus Gazpatch'nor (loosely translated as "eater of goblins," an old family name) was exiled after a thew war party he belonged to found out he had spared a basement of human and elvish women and children in a raid on a nearby settlement. When he found the basment of cowering fairfolk something in him snapped, and he could no longer find himself believing in the ways of his people or their dedication to the Necromancer of the Caves. He confessed his shaken confidence to the tribal witch doctor Grome, who cast him out in exile rather than sentence him to death in the arenas, possibly because the witch doctor knew Spraggus was secretly his son from illicit affair, and wished to save him instead. Spraggus now wanders human lands, swathed in thick robes and working as a nameless mercenary for hire. 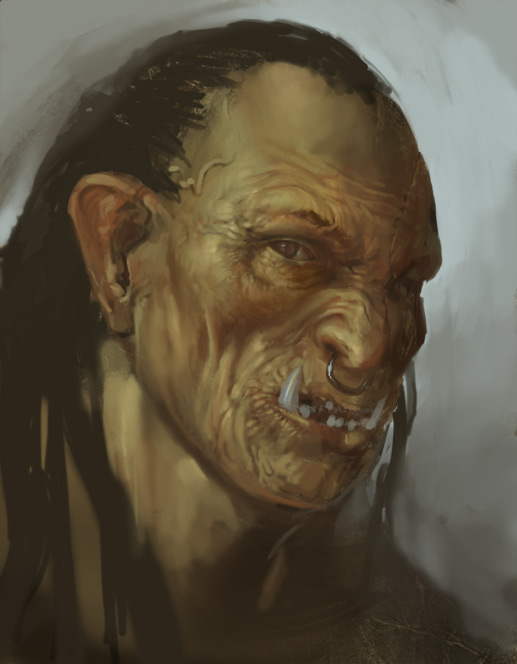 Orc Magus: There are occasional orcs with some sorcerous talent. Such an orc must have an intelligence of 13 or better. He loses all fighter traits and gains all magic user class traits instead, retaining infravision, daylight sensitivity and reaction adjustments from the base class. His advancement is as a wizard, and he can reach level 6 as a mage. The orc magus gains the saves and attack tables of a magic user.

Orc Thug: the thieves of orcish culture are feared by most. The orc loses his fighter traits, replacing them with thief traits instead. An orcish thug has the hit dice, advancement, skills and back stabbing features of the thief in place of the fighting talents he gave up. Such orcs are able to advance to 14th level as thieves. They still advance as monsters for purposes of attack tables, but gain the thief saving throws.

Orcish Witch Doctor: The clerics of orc civilization replace the fighter traits of the base orc, replacing those traits with the cleric. The orc gains the hit dice, attack tables, spell advancement and turning of a cleric, but orcish witch doctors can use any weapon and armor in accordance with the brutal gods of the orcs. Any chaotic witch doctor may use the reverse form of turn undead, control undead, in which a successful turn means that the witch doctor instead gains control of the undead for 1D6 turns, after which they will regain self-control and on a poor reaction roll may attack the witch doctor. On a "D" attempt the control lasts one or more days, and the undead rolls save vs. spells once per day to see if the effect ends.

The Half Orc Option:

Byproducts of the unfortunate predilection for raping and pillaging among orcish war clans in human and elven territories, it is a rare creature that is born into the world a half orc. Half orcs are treated as humans for purposes of character generation, meaning they pick from the four base classes and go from there. However, half orcs gain the following traits due to their unfortunate heritage:

Half orcs must have at least 9 in strength and constitution. Half orcs may not have more than 16 in charisma, but their human heritage has improved their overall potential intelligence and wisdom.

Half orcs have partial night vision, infravision to 60 feet. They do not suffer from daylight blindness. Half orcs do suffer from the orcish -2 reaction modifier in both polite company and among true orcs, though any community which learns to respect the half orc will not apply the penalty any further. Pure orcish communities may accept a half-breed for his orcish heritage, but still disdains him as a lesser being.

Despite their human heritage, half orcs have trouble making it beyond 12th level as magic users and clerics, and may only do so if their intelligence or wisdom is greater than 16, respectively. They have no such limits when becoming fighters and thieves.


Posted by Doctor Futurity at 6:01 AM