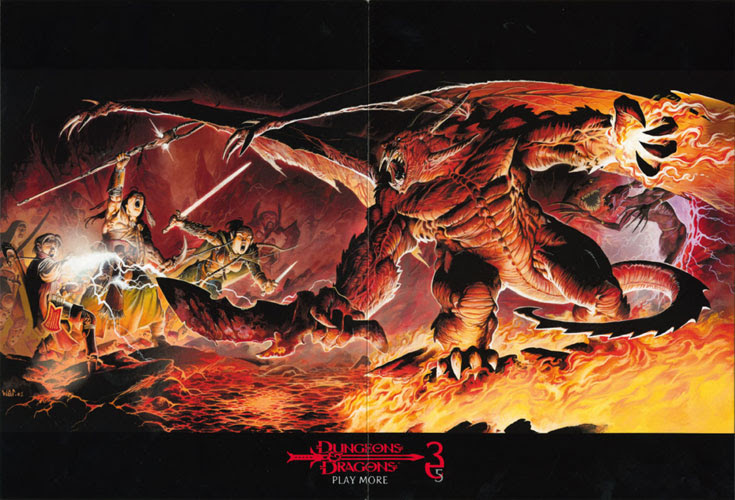 My Tuesday night group met and I presented them with three options: Magic World, Pathfinder, or D&D Next. We discussed it and after a bit everyone there opted to try out D&D Next. Of the players I had, only one had previously been in one of my earlier DDN playtests (one of the first, in fact) so he got to see the system in a more "evolved" state.

Long story short, we had a blast, and will continue with DDN for now. The rules in play feel pretty smooth and are so far proving very consistent. The advantage/disadvantage mechanic remains a real popular feature, and as DM I've warmed up to it now that the rules provide numerous guidelines and triggers on how/when to implement it. Spells and various actions produced adv/dis throughout play and players quite enjoyed being able to grant these effects as they grokked just how useful they could be.

The group had a human druid, dwarven fighter, wood elf cleric (lightbringer), human paladin (warden), human wizard and wood elf rogue (thief). All of the classes seemed to function well, and the fighter was rather effective.

There were a few spells and effects which raised questions. The fighter had an ability which seemed to state that you could spend an expertise die for damage and also grant advantange, but he was wondering if that meant he didn't have to expend the die while still granting advantage. I ruled that he could, but I'm reasonably sure that wasn't what was intended. Sanctuary, another classic spell, seemed to suggest that you could cast it on others but not yourself by way of wording, but we all agreed that it probably was intended that a cleric could cast it on herself. So there are some odd bits like this.

The Exceptions of 3rd edition are Baked in to 5th

A metric ton of stuff that boiled down to conditionals dependent on granted abilities (usually through feats) from 3rd and in some cases 4th edition were now "baked in" assumptions in DDN, which my players quickly warmed up to. Finesse being a property of some weapons rather than something you learn, for example...or dual wielding being something anyone can do without strict penalties, but with additional permissions making it better from feats. Armor proficiency being the only restriction to spell casting was another, as was the way that concentration now works as a convenient "rule of thumb" approach with some specific guidelines. This was good stuff.

Swift action spells were pretty cool, and the players were all very interested in what they meant. Reactions didn't pop into play as often as I had expected...yet. We're still at level 1, time enough for that later on. Swift action spells had the same stat block repeated ad nauseum. I guess that's useful for the playtest document but hopefully they don't need to do this in the final product.

Speaking of leveling, even though the PCs defeated three traps, fought two animated suits of armor, a horde of lemure devils and avoided an undead-releasing trap (all in about 2 1/2 hours of play, since we spent the other half of the night designing the characters and exploring options) they did not level up. As it turns out, the XP gain is scaled down appropriately such that a 250 XP requirement for 2nd level will probably take 2-3 play sessions to earn. My concern about the advancement rate in DDN has subsided a bit, for now.

The hit die mechanic for resting seemed to work well. We're doing the default rest mechanic and so far it seems to feel "right" to me which is interesting, as it's prior incarnation in earlier playtests definitely felt a bit off. One problem everyone with a spell caster noticed however was that the starting spell slots (and the rate of advancement) seemed to be fairly limiting. This is not something I as DM felt was bad, but I do expect them to figure out how to squeeze in an extended rest as soon as possible as the spell casters all expended their level 1 spells by the end of play.

There was a bit of confusion about proficiency in thieve's tools and the Disarm Trap feat. The rogue had proficiency granted by class, but the feat was looming nearby. It seemed like the intent was that the thief could, being proficient in his tools, attempt to disarm traps, but he lacked the feat so as best I could tell that meant he didn't get the skill die. It was kind of odd how they did it this way....you're basically spending a feat to get a skill.

On the DM's side of things I found that combat resolution was much simpler and more intuitive that it was in the early playtest rounds. The clarity came from better details on the action/movement/reaction/swift action economy and how it played out. The net result was we played the game  with narrative combat, not even a board, and it flowed very well. Combat was quick. At least as quick as in the 2E days. It still retained a lot of interesting variables. It works extremely well in the theater of the mind narrative approach. I will have to try it with a grid and minis sometime, but admit that its clearly not necessary. This is a Huge Plus.

The "flat" math of DDN made a lot of calculations such as DCs a simple matter, I noticed.

The skill mechanic resolutions were detailed and helpful. I've read in some spots that the skill system lacks clarity; while it might be nice to have some expository text on each skill's intent, the DC mechanics for resolution was clear as day.

I noticed that cleverly optimized PCs could guarantee decent DC spell checks, and as a result the monsters were failing saves pretty frequently. The absence (in all spells we used) of any sort of touch attack mechanic threw the players off initially, but when they realized all they had to do was cast and wait for me to check the saves on the monsters they rather liked it. Personally I prefer systems that load the die rolling on the players' side as it helps them feel more engaged....so the idea of a hit-roll save mechanic initiated by the player is more my cup of tea, but the system as presented did work very well and no one had an issue with it.

Monsters do not have an initiative score, which means you go by Dex mod. This seems odd to me, as one could in theory have a higher initiative modifier than just Dex if you feel some trait of the monster justifies it, right? This could just be "3.5 think" going on, though, as the system as presented is very closely aligned to the 1E/2E methodology.

The monster stat blocks were otherwise (imo) perfect. This is one area I think they've got down to a science now, and all they need to do now is add lots of great descriptive stuff and some awesome illustrations.