I got a decent amount of game time in this weekend with Defiance, including several hours on my laptop while teaming up with a friend who recently upgraded his seven year old computer to something more state of the art. Overall a well rounded experience for first impressions.

Defiance is essentially a shooter-based MMO which aims to capture several crowds: the MMOers looking for something different, the Halo dudes looking for something different, the console crowd in general and anyone who'd like to experience a (so far) co-op experience online in a massive multi-player environment. Depending on your level of appreciation for this style of game, this level of story focus in a genre not always well-regarded for its stories, and your tolerance for twitch-based game play your mileage may vary in terms of enjoyment. For me? This was a no-brainer. It hits most of my "like" buttons in fast succession.

If you'd like a chance to explore Defiance's setting before approaching the game, a good place to start is with the Defiance 14 minute pilot preview. It's on Hulu and Xbox Live for free download right now, and offers an excellent glimpse into the look, feel and style of this new multimedia experience. The two lead characters in this preview also happen to show up in the game, which is not unexpected as my understanding is that Defiance will have a lot of crossover between the two, and of course the big gimmick here is that events in the game will influence the TV show.

So based on the thirteen-odd hours I've sunk into Defiance so far, here are my off-hand observations:

They go hand in hand here. The cinematics are great, and quite entertaining. There's only one starter zone, unfortunately, and everyone essentially drops in as "ark hunters," in the employ of one Van Bach, a  suspiciously shady mad scientist gun merchant type who has a bit of a reputation. The lead-in to the game approaches information dispersal in one of the following two ways, and I haven't decided which its going for: 1. it's being coy about info, expecting you to fill in the gaps throught the TV show and web site, or 2. it's using economy of information to dole out as little front-loaded background as possible, to let the player organically learn about the world as you go. Whichever was intended (my money's on #1) the effect for now is the same: hints of a very big world with very little hard information to go on, and lots of inferred possibilities. It works for me.

I won't go into the plot here because frankly I'm still piecing it together but the short version is: it's Earth, after an alien empire shows up with colony ships and starts terraforming. Earth had some sort of unifying government thanks to a thirteen year warning of the impending alien arrival, but that wasn't enough to do more than make humans a modest underclass presence in a vast galactic empire. Some sort of rebellion hit, and humanity, along with another minor (I'm guessing) race called the Irathient managed to strike a major blow at the Battle of Defiance. Now, thirty three years since the Votar empire arrive there's a steady stream of debris falling from space thanks to a vast graveyard of ancient colony ships and war time debris. This immense field of orbit-decaying junk forms the basis of the arkfalls that happen. A lot.

The game gives you your own Cortana...called Ego, here....an interactive AI only you can see which also lets you resurrect and (best as I can tell) summons gear and vehicles for you. It's not entirely clear to me how the ego powers work, just that they do. This is a post-Halo, post-Mass Effect, post-Star Wars universe in which the ability to perform weird powers which once might have been labeled psionics is nothing unexpected now. Anyway, Ego is your guide and primary quest giver. When you aren't getting radioed in for a new mission or stumbling across one, Ego is manifesting in key spots to lure you over to talk to her, upon which she will spring another quest on you. It's actually a very effective way of repacking traditional quest delivery into something that feels fresh.

This is a Trion game, however, so the defined quests are the least interesting things to do (albeit much more interesting than any other more traditional MMO). Rather, the arkfall events (reminiscent of rift and invasion events in Rift) and the open-world active instances are the really interesting bits. There's a lot of crazy stuff going on and you can drive around randomly to stumble on all kinds of things. This is one of the reasons I liked Rift so much, and the same core formula serves Defiance equally well.

I don't know if there are traditional "closed" instances in Defiance yet; I haven't found them if there are, but I wouldn't be surprised if they exist somewhere. Time will tell. I guess I could google it? Google seems to suggest as much...and PVP areas too...but still haven't seen either in my playthroughs.

Defiance suffers in its chat options, which I suspect suffer from a build designed to accomodate consoles. You can't send whispers, you need to find players to group with through the friend mechanic and if you were hoping for casual Barrens chat while marauding through terraformed Earth then you'll be sorely disappointed. They need to work on this, badly, before the traditionally social end of the MMO crowd evaporates.

The game is perfectly functional with a mouse and keyboard (and my wife is playing it this way just fine) but I am using my Xbox controller and finding it a more generally satisfying experience since I can kick back in my chair and not be hunched over the keyboard.

It's run and gun twitch-based shooter mechanics. So far all I've seen in PvE environments, so no idea how the PVP side of the game works (and I'm only assuming from stuff I've read so far that the game has implemented PVP yet), but the gameplay is very solid-feeling. It's a third-person perspective game, but not a cover-based shooter, so you don't worry about sticking to the environment by accident. This is good....it means the world is a bit more organic looking, and you don't see chest high walls to hide behind anywhere.

One huge plus (so far) is that the game's mechanics don't appear to be based on a level mechanic at all. You do raise your rank in EGO power, which gives you more perks to work with your Ego skills, but the vast majority of advancement in this game is the acquisition of guns, mods, gear, outfits and vehicles.

The vehicle mechanics are serviceable and perfectly good for the kind of game this is. You will get annoyed at the static environment...when I hit a flaming barrel I expect it to tip over, not to stop me with the resistance of a 50 ton concrete wall!....but the good news is you can run over bad guys. Players ignore each other in terms of the driving, which is good; if you had to watch out for your fellow man it would get ugly quick...not hitting players in this game right now would be downright impossible.

Vehicles come in all sizes and shapes, and larger ones can carry passengers. Cool.

I played for several hours in a group and while it was quite fun, this is where a lot of bugs cropped up. My single player experience has been 99% bug-free, but in a group I found some weird issues, including:

1. My cohort, despite being a tough female machinist would appear on my screen as a big male survivalist
2. On more than one occasion we could see each other on the map but didn't exist in each other's frame of reality. There's a "go to friend" button which was not taking us to each other. We ultimately figured out that somehow my buddy had lost the quest line we were on, and had to eventually backtrack to get him back to it.
3. Quest lines, speaking of which, are a more traditional "grab this and complete it before moving on" style, similar to The Secret World's approach (or any old shooter's approach). So my friend, who is a WoW junkie, was having a hard time kicking the grab-every-quest-everywhere mentality.
4. Even when we got him back on track for a quest line I had now finished, when he ran into the instance area he disappeared and I was experiencing something entirely different from him. Is it phasing, or a glitch? I had no idea, and the game offered no clues to illuminate the situation for us.

The fact that I was playing on my laptop at his house while he played on his big screen made these glitches all the more obvious and amusing. If we'd been playing remotely, it would have been even more frustrating.

On my decent home rig this game runs great. On my laptop which has a decent icore 5 processor but no dedicated GPU it ran surprisingly well on low and medium performance, but the experience was still lacking. If someone trashes this game on the grounds its got consolitis or poor graphics, be suspect that they are running a suboptimal rig, because I can gaurantee that the difference between a low-performance setting and a max-performance setting in Defiance is huge. That said, if you were stuck with a low-performance PC and understood your computer's limitations but really wanted to experience Defiance anyway, I don't think you'd be too disappointed....it was still fun to play on the laptop, even if it looks noticeably less pretty.

This is a one-time purchase to be supported by a "season pass" for the next five expansions and a cash shop. I haven't even bothered to look into the cash shop outside of claiming my special edition items, but most of the shop content seems to be outfits and gear; I've found myself enjoying the game with what it offers and the cash shop experience is extremely non-invasive, highy ignorable (so far).

I'm going to keep playing and enjoying it. The game has fun gameplay, controls that feel "right," and a compelling storyline as well as enough variety in the MMO-questing elements to make it click better than prior efforts. This is not another Tabula Rasa, although I really need to see how much content overall the game has. For me it's probably going to last a long, long time. For the insanely dedicated hardcore MMO and shooter crowd? No idea.....time will tell. The game does have a metric ton of repeatable content, though...and the fact that there's no leveling mechanic means you can (best as I can tell so far) wander back to older areas and enjoy the region all over again and still feel a challenge.

I'm still in Mount Tam right now (the area after the tutorial zone) and still slogging my way through on four different characters (you get four character slots). According to the wiki there are five total areas all set in the San Francisco Bay area. Mount Tam is a huge zone, so if the other four are as big, this game should last me a long, long time. 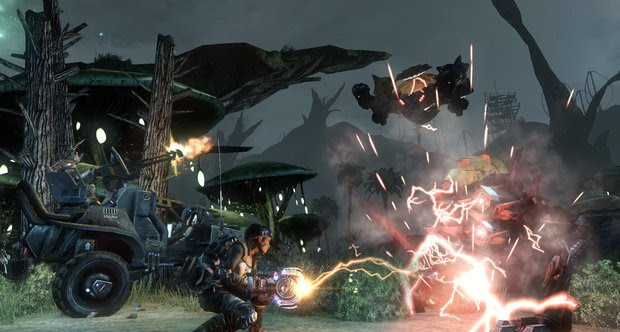