As a fun side project I've been messing around with some ideas about how to use the Basic and Expert Dungeons & Dragons sets in as purist a fashion as possible while still "doing it the way I used to" back in the early eighties. That is, by creating an unholy union between AD&D for "stuff" and B/X D&D for "rules." When I realized a few months back that the reason I remembered those game days so fondly was because I actually did tend to play this way, cherry-picking classes, races, monsters and some rules from AD&D, but leaning on B/X for the "final call" and all mechanical decisions.

Side Note: the clean PDF copies over at dndclassics.com are good enough to print. Which I have done. My printed and tape-bound copies of the Basic and Expert sets along with the much lauded Night's Dark Terror (which I have never previously owned) are in convenient physical form. They are very clean and easy to read, so the new PDFs are well worth it.

Anyway, I've been toying with the idea of blending B/X D&D with the Advanced Edition Companion for Labyrinth Lord. The other possibility was Swords & Wizardry Complete, but that sort of holds its own rather well, and all I actually want is to have B/X D&D presented as "core" with a set of additional rules that will allow for paladins, monks, assassins and rangers if people want to play those classes; and also a way for people to play an elf who can pick locks or a dwarf who prefers something less dramatic than a battle axe, should they so desire. The fact that LL assumes you can blend and mix both AD&D-style classes and classic B/X racial classes is just an extra perk.

Advanced Edition Companion also has all the creepy demons and devils that B/X D&D never got. It's pretty much got "all the extra stuff" that one could want to pilfer from AD&D and stick into B/X, which is pretty cool. and I can slap on Realms of Crawling Chaos as well if I see fit to do so.

Now all I need to do is find some willing victims. I've got two nice groups right now...but my Tuesday night group has a few players who do not want to go back to the old days (and before you ask, they are all older gamers than I, who are pretty well set on exploring the Hot Newness over the Old Classics). My Wednesday regulars are all dedicated to Pathfinder. Well....maybe I can get something up on some late week night...or even take the plunge and try somehow to figure out the best way to run games online (Google Hangouts seems like a good place).

Here's a few B/X D&D starter pregens I worked up for this hypothetical game I'm bandying about. Note that they are built for the Warlords of Lingusia setting (the campaign which was born in Basic D&D back in 1980), and are pure B/X in design (barring some language issues; I am treating "chaotic" as Abyssal and "lawful" as Primordial, because I have never been able to accept alignment languages as anything that made even remote sense). I really enjoy remembering how quickly characters roll up in B/X.

Oh, they all got max HPs too. Just seemed right to grant this....poor B/X adventurers are pathetic enough at level 1 without some decent hit points!

Notarios is a journeyman traveler from Yllmar, a high elf and practiced swordmage seeking to make a reputation for himself. 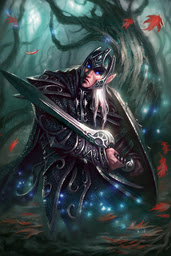 Grelfaine is a young Halfling adventurer from coastal Golmadras who ran afoul of the law. He’s now on a journey of discovery….to discover his fortune, that is! 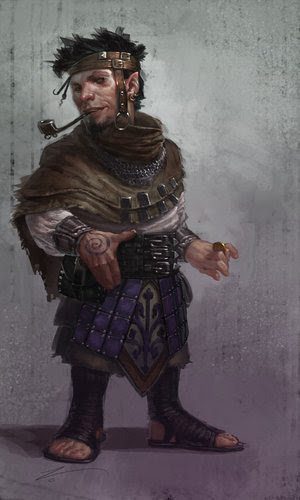 Saddarus is a student of the magical arts from the mountain city of Senempar and a practiced traveler who has been to several major city ports working as an apprentice and courier for his old master. He now seeks his own way, having bought out his contract of indenturment. 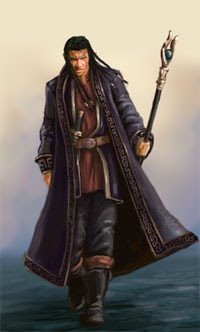 Korleska is a practiced Hyrkanian soldier of noble blood, hailing from the city of Kymir. She took a liking to Saddarus and his been acting as his bodyguard..for now. 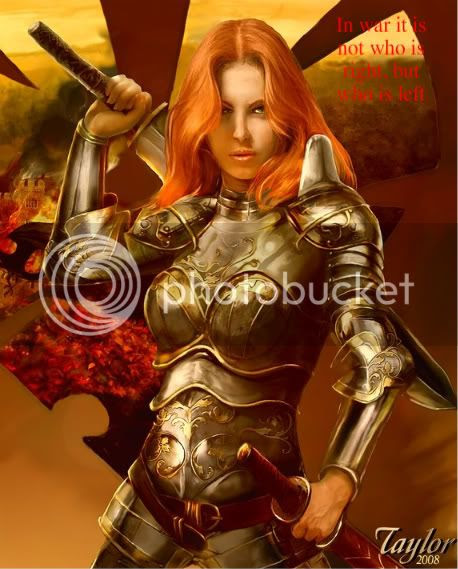 Senespur is a Kymiri Hyrkanian and notorious local second-story man who’s looking to make his fortune by any means possible. He will not admit it, but he is Saddarus’s older half-brother, and feels a measure of responsibility for his younger but wiser sibling.