Review of Painted Skin: The Resurrection 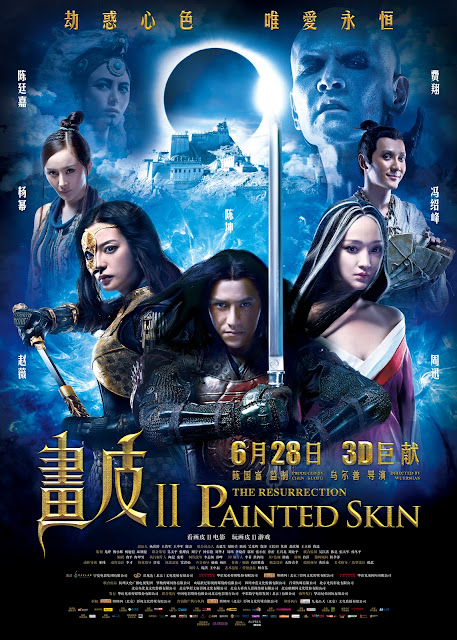 Review of Painted Skin: The Resurrection

also known as, "Chinese Cinema Has All The Cool Fantasy Movies"

I've seen more than my fair share of amazing fantasy adventures come out of Chinese cinema. It's not just about martial arts, wire-fu and traditional historical epics anymore, and the days when Hong Kong action flicks were guaranteed to be full of cheesy acting and bad voice-overs is simply a thing of the past (more or less). Today we get some seriously good stuff.

Painted Skin: The Resurrection is essentially an answer to the question, "What if it turned out that Brom and Robert E. Howard were both actually Chinese men who wanted to make a movie?" Featuring tale set in a world that is one part ancient China and one part freaky, quasi-necrophiliac barbarian-and-sorcerer craziness, Painted Skin: The Resurrection manages to create an even more interesting contrast in eastern and western fantasy than usual, with a firm mixture of eastern mythology and a dash of really exotic sword & sorcery lifted from western aesthetics but thoroughly enmeshed in eastern sensibilities. It's a really fascinating experience.

The story starts with a fox woman, a demoness trapped in ice for an ancient transgression in which she helped save the life of a mortal man whom she fell in love with. Xiaowei is condemned to imprisonment within ice by her fellow demons for this act of kindness and love, and lies for centuries in her prison until the young  bird demon Que'er comes along and frees her (Que'er being something of a curious trickster). Xiaowei, being a demon, needs human hearts to sustain herself in the mortal realm, and as she travels about with Que'er she realizes that she desperately wants to be human, an act which is only possible if a mortal willingly gives him her heart.

Xiaowei eventually stumbles upon the martially proficient Princess Jing, who is on the lam from an imminent marriage to the prince of the empire of Tian Lang, which is just across the street from the remote mountain fortress of the White City where her lost love, the former palace guard turned general of the frontier named Huo Xin commands. It turns out that, long ago, the Princess was mauled by a bear, and Huo, as her guard, saved her....but a budding romance was ruined by his guilt at her near death experience which led to permanent scars on her face, now hidden behind her golden mask.

Xiaowei enters the White City with the intent of conspiring to somehow find a willing mortal to trade hearts with, so that she may at last feel mortality and (more importantly) escape her demon prison-keepers. Que'er, her faithful demon-bird-companion (note that both of them are disguised mortal women, but they regularly slip in and out of their animal and demon guises with great special effects) in the interim runs across a local demon hunter named Pang Lang. Pang Lang comes froma long ancestry of demon hunters and possesses the bottled tip of an ancient fox demon's tail which glows in the presence of demons. He grows immediately suspicious at the newly arrived comely guest of the Princess...

As is traditional with Chinese cinema, the story rapidly gets more complicated as love entanglements explode with guilt, confusion, misinterpretation and doubt. Amidst the unrequited love of Princess Jing and General Huo and the schemes of Xiaowei and Que'er there is the looming threat of the Empire of Tian Lang, which (being just a stone's throw away in a very unpleasant network of rocky crags) is apparently ever present and also filled with its own schemes, thanks to a remarkably vile princess, an enigmatic prince (on whom I shall say nothing because Spoilers) and a very evil necromancer. The entire empire of Tian Lang has taken its playbook and decor straight out of a Conan tale, with a heavy, heavy emphasis on as many bones as can possibly be gathered in every single shot.

As I was watching this movie, it was in the middle of the arrival of Tian Lang's army at the gates of the White City that I realized that I was watching a movie which, with very little (i.e. no) effort could be described as a Hyborean tale...sans Conan...set along the frontier of Khittai. Somewhere in Hyborea's Khittain easterlands this story probably...nay, certainly!....happened, folks.

The story is tight, and even possible to follow (not always easy in Chinese cinema). The melodrama is appropriate. The villains are intensely villainous and leave no doubt as to just how over-the-top evil they are. The demons are fantastically demonic and well done. The ostensible heroes of this play...Jing and Huo, are deeply empathetic and easy to care about. The version on Netflix I saw was fairly well translated as best I could tell with only one typo in the subtitles.

This movie gets a solid A+++ from the Death Bat! Camazotz approves and says that anyone who loves sword & sorcery, fantasy, swordplay and a heavy dose of romantic drama mixed with intense violence in their movies should see Painted Skin: The Resurrection. It is also well worth watching for some inspiration in future games, especially if you'd like to see what a non-western take on sword & sorcery looks like.
A+++