When I saw the "crocodilian" entry in Magic World I have a brief moment of hope that it was an entry for lizard men, who outside of the Gloranthan slaarg are seriously neglected in BRP powered systems, despite the fact that they are a great staple of villainy for swords & sorcery campaigns, something BRP-styled systems excel at. My Sarvaellen campaign relies on lizard men as a major humanoid monstrous threat, of course, so naturally it needs them. Like, now...for tonight's game. So here they are: 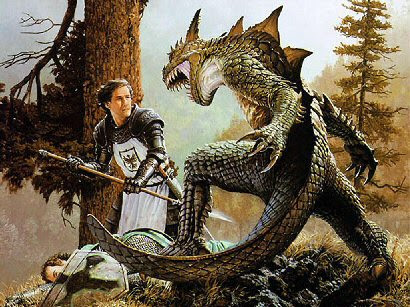 Sarvaelen is a humanocentric land, dominated by men in a world where no elves, dwarves, halfings or orcs exist…at least, not in a conventional sense. If there are elves in Sarvaelen, they are reclusive and mythical. If there are dwarves, they are deep beneath the earth and kill men on sight. If there are orcs, they are murderous savages in the deeps of the wilderness who slay all that trespass. Beyond this, none can truly say whether such creatures might really exist or not.

Lizard men, however, are a different story. The rapacious and violent Selutar are raiders, marauders and destroyers who seek to destroy humanity and indeed all life itself. They are subterranean dwellers in the dark, sometimes labeled troglodytes and beast men, but in fact unrelated to either of those equally dangerous kindred. The Selutar are driven by the worship of the Dark Mother Eshraggol, an immense, bloated dragon goddess, an Old One from before the Fall of Camrinal that is said to have given birth to their fouls species at the dawn of time, and to have forged her children into an army of shadow destined to seek the extermination of man ever since. As with all such chaoskin, the Selutar are defeated only by their own lack of organization and inability to focus on meaningful military structure, preferring instead overwhelming horde tactics.

Because Selutar are most dangerous when their population goes unchecked, regions like Aeronost employ mercenary companies and some dedicated knighthoods (such as the Vigilant Order of the Dragon) to seek out and slaughter Selutar in their subterranean homes whenever possible.

There are rumors of Selutar dwelling in the deep woods and mountains of some regions who have cast off the religious fanaticism of their underground kin. These remote colonies are usually far removed from men, and when found by their zealous kin are usually hunted to destruction. There is a legend about a pious Saint Erasma, a servant of Nevereth who converted the first Selutar to the worship of the goddess and thus explaining the appearance of rare but nonviolent lizard men.

Despite their religious fervor, there are few sorcerers among the Selutar. Most priest do not cast magic, though they still engage in ancient rituals, often at profane sacrificial sites that contain inherent magic which they call upon through grim sacrifice. The occasional true sorcerer among the Selutar usually seeks to follow the goddess as a shaman or cultist, but occasionally such enlightened lizard men break away entirely to pursue greater mysteries, as the acquisition of such power tends to open their minds to a broader perspective on the nature of arcane power in the world.

Special Traits: Selutar have uncanny senses of smell and are adapted for total darkness, able to see with low-light vision in pitch black conditions as if it were an overcast day. Selutar who become priests and cultists of Eshraggol are usually female or strong males, and have a 50% chance of developing a chaotic feature. Posted by Doctor Futurity at 7:01 AM