It's Officially "Too Many Games Weekend" - Defiance, Gears of War: Judgement, Resident Evil 6 and Neverwinter

For those who are, unlike me, able to restrain themselves and stick to a single game title for ponderously long periods of time (like...literal hours!) this may not be an issue. But for those of you like me who have an insatiable urge to get all of this stuff while it's hot, and at least dabble in each game as it manifests on my PC or console...this is a tough weekend. A quick recap, and "status of opinions so far:"

Gears of War: Judgement - I haven't played much yet, but the game is looking good, seeing as how it is built on the foundations laid by Gears of War 3. It's a bit weird playing a game without Marcus Fenix, however. Baird's a worthy character, but after the epic conclusion of GoW 3 stepping back ten years in time to a different squad of gears (none of whom I recognize, which suggests they will all suffer horrible fates at some point) is a bit weird.

GoW:J has also taken a moment to shake up the formula a teeny bit. Experienced Gears fans will find that the four weapon selection using the direction keys is gone, to be replaced by a style approaching other franchises a bit. This may or may not bother some. Still....this game has an intensely polished feel. 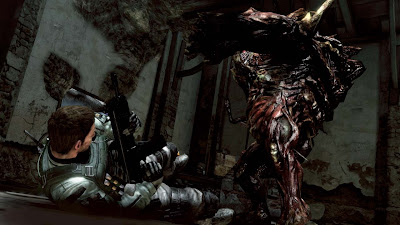 Resident Evil 6 on PC - downloaded, played the intro again, will probably replay the campaigns I've already slogged through on the Xbox 360, because frankly everything is always better on PC, and you know it. Plus, I noticed the keyboard QTEs were much easier to complete than they were on the 360 controls. Beyond that.....not much to report yet. Graphics of course look better.

Neverwinter - I got into the 3rd beta, and so far its fun. It's more ARPG-like, and the trappings of D&D are everywhere at least terms of story, presentation and name...but the game definitely plays more like a better D&D-skinned version of Tera Online or more elaborate Diablo III with over-the-shoulder cameras. You can tell that the game is built on a much revamped and improved Cryptic engine, but it's far and away more polished than Cryptic's prior efforts pre-Perfect World days. My wife is loving it and has been in all the betas so far. Me....I'm a bit burned out on fantasy MMOs, to be honest, so I am concerned my apathy toward the game has more to do with my general lack of interest in fantasy MMORPGs right now than any actual play issues. The game, as I said, feels very smooth and polished and looks great. I'll reserve judgement for now. It's going to be F2P anyway, so it's guaranteed I'll be playing it on release. Whether or not I'll feel like spending money on it is another matter entirely. 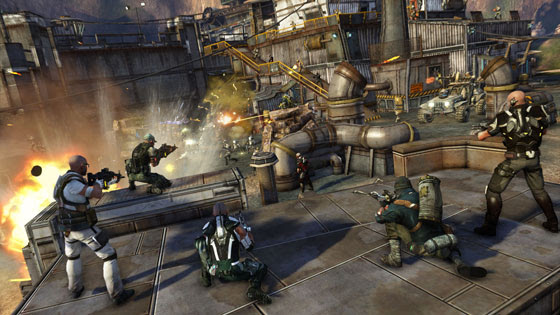 Defiance - I got invited to the weekend beta. I wanted to check this game out because I was having a hard time from the trailers determining quite how this game would play and feel, and was worried it was going to be another Tabula Rasa. Well...guess what....it's actually an unbelievably amazing game, a very polished and extremely immersive experience. Defiance isn't so much competing with other MMOs...or even other multiplayer online shooters like Planetside 2. It's effectively Trion's effort at capturing a genie in the bottle, by nabbing the MMORPG elements people love and blending them with the style of RPGs like Mass Effect 3 and shooters like Halo 4 and Borderlands. It's a third person perspective game which will feel very, very comfortable to you if you've played Mass Effect 2 and 3. Defiance is all about skill while letting you level through additional powers, equipment and looks. It's a huge world....even in the few hours I played I realized I was in a much more expansive environment than most MMORPGs offer, even the really big ones. You get a vehicle very early on, and you need it. The vehicle driving feels great, too.

Defiance went from a "suspicious this will be worth my time" game to a "will be preordering this weekend, and need to reconsider how many other games I really need to buy now, since this one will be occupying all my time."

The fact that it's apparently going for a "buy to play" model supported by a season pass with 5 planned DLC releases is just one more perk. I prefer that sort of model for whatever reason to the subscription model or the (shudder) F2P approach that is designed to gouge you with nickel and diming doom.

I'll be playing a lot more Defiance when it comes out April 2nd, and will let my wife jump on my account this weekend to check it out, too. This game is going to be huge, I think, and people need something that's got the cinematic quality, gorgeous graphics, smooth gameplay and attention to detail that this title is offering. I feel like some sort of Trion groupie praising it, but damn, those guys really know what they're doing apparently.

Oh yeah....God of Wars: Ascension came out, and I snagged it, what with my brand new PS3 sitting around and all. Logged very little time in but the game looks good and plays like God of War did back in the PS2 era....the last time I actually played a God of War game.

Hmmm....what else? Oh, Dungeons & Dragons Next popped out an update. Downloaded it, glanced at the classes. This may be good, I don't know. I've sort of decided I'd rather just see the finished product and make a decision then. My entrenchment with Pathfinder is strong, so D&D Next needs to do something weird and interesting to break the Paizo spell on me right now....and the playtest packets are not showing it.

Posted by Doctor Futurity at 11:58 PM