Dungeons of Dread is Out 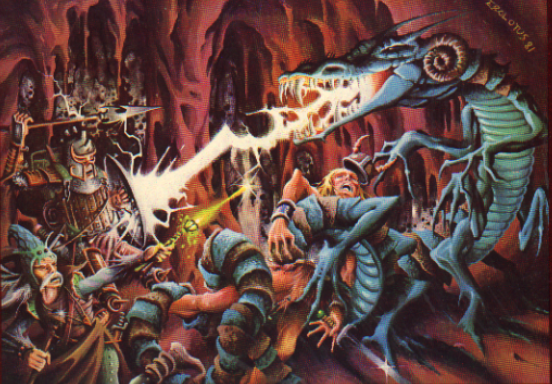 Dungeons of Dread is apparently out in some areas, although its official release date is March 19th (I think WotC has an early release program for locations which participate in their Encounters programs...or something. Or maybe street dates aren't that relevant anymore.)

Anyway, the four-module collection of White Plume Mountain, Tomb of Horrors, Expedition to the Barrier Peaks and the Lost Caverns of Tsojcanth are the compiled S series faithfully recreated. These were great modules, and worth getting regardless of your preferred edition of D&D, as they can easily be ported over.

As I look through the pending releases at WotC, I am reminded that we are now only two months away from the reprint releases of the 2nd edition AD&D rulebooks. Joy! The edition I am most eager to snag, the one which provided consistent, weekly entertainment from 1989 through 2000. AD&D 2E defined the 90's for me, it was the system in which all of my "Keepers of Lingusia" campaigns took place from my first days in college right on up through my second marriage, and was the system that spawned the first lengthy (8+ year) campaign in the Realms of Chirak. Even when 3rd edition arrived on scene I continued to use the bulk of the 2nd edition campaign material in conjunction with 3E, and as 3E grew progressively more complex and demanding AD&D 2E increasingly looked like the edition that still allowed one to enjoy the game for fun, instead of work. I returned to 2E in 2007 when I decided to take a permanent hiatus from 3.5 D&D right up until 4th edition arrived on scene in mid 2008. I was further reminded of how much I prefer 2E after my recent attempt at returning to the venerable AD&D 1st edition late last year, which proved to be a less satisfying experience than I thought when I remembered that everything I loved about 2E's refinement was warped or missing from the kludgy and sometimes bizarre mechanical oddities of 1E.

Anyway....no matter which ruleset you prefer, this is a good year to enjoy older editions of AD&D.

Posted by Doctor Futurity at 12:15 PM