Tales from the Watchers of the Sullen Vigil: Dragons of Sarvaelen


Since the dawn of mankind’s rise from the muddy waters of prehistoric times dragons have been present. Though hard to find, some erudite researchers can point to ancient caves filled with thousands upon thousands of years of ancient rock art, depicting a history both venerable and momentous in its imaginative capture of humanity’s efforts to understand the world around it. Dragons, it has been noted, are among the first beasts ever depicted by men.

The first dragons were said to have appeared in the deep wilderness, dragging and clawing their way up to the surface of the world from the chthonic realms below. Indeed, the many cavernous realms beneath the surface of the known world are attributed to the tireless digging and scratching of the dragons, which burrow long and deep into the earth to make their homes.

These first dragons spoke as men, and in some stories (mostly told among the elves) it is claimed that they actually taught the first languages to humanity. This language was to allow for easy instruction on the worship of the chthonic gods of the deep. The dragons, it was said, were the heralds of the Old Gods, born in the deeps of the world specifically to serve and envoys and servitors to these chthonic beings in the claustrophobic darkness at the center of the world.

The fragmentary texts which survived the Final War of the old empire of Camrinal piece together an interesting later history of dragons. It is clear that the more intelligent dragons served as envoys and voices for these old gods, although some might dispute that the dragons actually were such, and weren’t simply leveraging their own great power to set up cults and followings which served their own needs. Dragons regularly demanded tribute…and still do…from the lesser kindred of the world, seeking to promise safety in exchange for gold and sacrifice.

Arcane scholars who have studied dragons note that there are really two distinct breeds of beast in the world, one which is cunningly intelligent and rare, and the more common beasts which are normally found in the wilds, slaying livestock and terrorizing peasants. There is much speculation on how the two relate, as dragons by and large appear to be of normal intelligence, but it is as if some internal social problem or cultural matter has led to younger dragons going feral. Either way, whether speaking with one of the old intelligent dragons or the newer feral ones, a traveler risks losing his life if he enrages the beast.

Amongst dragons there is something of a different consensus. The dragons claim to have come from a breed of ancient beasts that sailed extraplanar realms, transmigrating from one dimension to the next, to populate vast numbers of worlds. The dragons that settled on Sarvaelen, they claim, were enamored with the dark whisperings of the Old Gods, tempted by their power, and so settled in to stay. The mysteries and secrets revealed by the Old Ones to the dragons was intoxicating, and those who embraced it found that they were given powers of prophecy and near immortality.

The embrace of the Old Gods had a terrible impact on the dragons, however, for the power of these chthonic gods warped and twisted the species over time, and as the generations past more and more dragons gave birth to feral children and monsters. Wyverns, serpents, hydrae and other beasts are suspected to have come about from the corrupted eggs of the eldest dragons.

Some dragons sought to purge their bloodline of the corruption, to turn their back on the Old Gods. These dragons migrated to remote regions, usually high in the mountains or in other areas sufficiently remote that the ever-present whispering of the maddening dreams and prophecies of the Old Gods was barely audible to their mind. These dragons have sometimes gone through desperate measures to purge their bodies of the taint, seeking to use exceptional magic, and occasionally engaging in breeding experiments with the lesser mortal races. No one knows if any have been successful at these efforts, but stories of adventurers contracted to scaly-skinned agents who descend from the mountains to pursue exotic tasks such as the acquisition of a phoenix’s eggs from the Seletharin Desert have been spoken of.

In game terms, dragons of Sarvaelen are statistically identical to your preferred game system’s take on them, albeit with a preponderance of ancient priests and mages in the service of the Old Gods. The dragons seem to have avoided much damage to their kind during the Final War of Camrinal, although the stories from that period suggest that a great many feral dragons were captured and trained for war in that time. Such an affront would be impossible now, as all of the great Magi are long dead, snuffed out during the final days of the war when Camrinal was blasted into oblivion. Indeed, it is said that undead dragons and their knights, unable to rest, still haunt the last battlefields before the imperial city of Zaravande, looking to carry on the fight eternally.

In T&T, Legend and BRP you can use your preferred dragon stats as you see fit. Dragons are multi-colored and come in many varieties, so there is no uniformity among their kind, or division by color. If you use dragons in C&C or other similar games, color types are less relevant and dragon breeds are better identified by their use of exotic breath weapons. Nor is alignment an issue for dragons, where a red or gold can both be chaotic evil, or both lawful good, and their color is only what they have a preponderance of, as their chromatic nature leads naturally to a wide mixture of “mutts.”

Next: back to the frontier wilds along Camrinal, and to the remote Watcher outpost near the ruins of dread Zaravande! 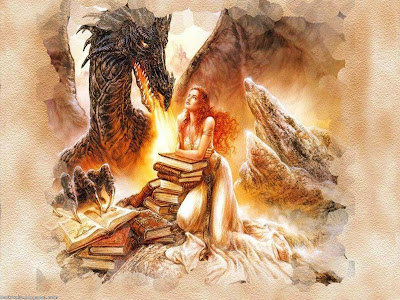