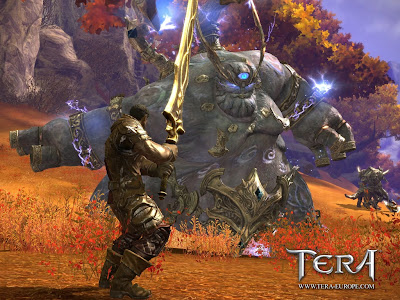 Hey, I did find something to post about (on top of the non post talking about computer issues)....Tera! This Korean MMO released a year ago but today is being released in the US. There's an entertaining article here talking about things they did to westernize it for the North American audience, and I have to say, I'm glad they did.

Tera is also getting attention for its somewhat over-the-top "stripper mage" and "stripper warrior" gear. I'll be curious to see how ridiculous it gets. Some of the previews however that my wife has seen have her drooling over the hot muscled elf abs so my suspicion is that the old (and usually true) argument in video game depictions of men vs. women, in which women are all hyper-sexualized and men are all focused on power-fantasy portrayals may be blurred a bit here. I've always argued that the best game will be one which allowed everyone to play whatever they feel like--or at least offer equal opportunity to both genders to play the preferred avatar of choice.

In any case, there's a great preview of the game right here which sold me on it. From that video I can tell that there are two important features of the world of Tera that can be determined: pasty technology isn't just an art in Tera, its a science, and apparently the world of Tera saw pandarens and decided to go not one but two better with disturbingly adorable fuzzy murder hobos and bunny girls. Ahhh Korea.

Anyway, I'll let you know what I think once I get some play time in!