Kasdalan: Where the Dark Queen Won 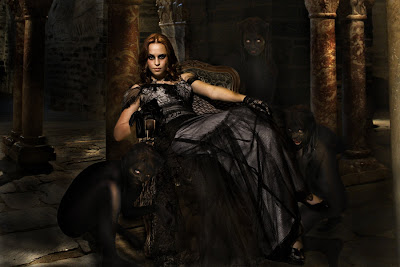 This week I start a new and updated gazetteer entry from the actual Realms of Chirak, outlining the dark and twisted politics and history of Kasdalan. I will include the material available on Kasdalan from "The Realms of Chirak" as well as additional data sinced revealed. All of this will make it into the RoC revision to eventually be released for Legend and Pathfinder in two separate editions, some day.
Part I: Kasdalan: An Introduction

(From The Realms of Chirak, Chapter V)
Southern kingdom of Old Pellucid ruled by the Necromancer Queen

Cultural Level: steel age-renaissance
Population: Perhaps 2 million of the living, and at least as many undead some suspect
Government: Imperial dynasty
Rulers: Lady Poe is and for as far back as the history books say, always was empress.
Religions: Lady Poe permits no worship save perhaps to Ga’Thon or Shaligon.
Social Titles: thralls, peasants, barons, lesser lords, overlords, necromancer lords, generals.
Coinage: The copper sun, silver moon, gold crown, platinum royal.
Allies: Kasdalan has a loose alliance with Dragos.
Enemies: Kasdalan has been a thorn in the side of all Pellucid lands since the old empire fell. Mercurios and Correnstal are enemies, as is Pelaeus and the Skeledani nomads in the south east.

The Kasdalani Empire in the Deep South is a powerful nation ruled by a Necromantic cult, at the head of which is the ancient Sorceress called Lady Erissa Poe. Poe enforces her rule with her many sorcerously gifted children, and controls her mages though the promise of necromantic immortality. This is a dangerous place to live in, heavily oppressed and ready for war against hostile and fearful neighbors.

Lady Poe is said to have twelve daughters, possibly more, all spawned from strange rites and consummated by lovers both undead and soon to be found dead afterwards. The most legendary of Lady Poe’s ex's is Zam Redar, a Thousandspawn whom she married and manipulated in to leading a vast army many centuries ago to conquer and unite the old Pellucid Empire and beyond. When Zam Redar threatened her power, Lady Poe took the immortal godspawn and cast him down the gullet of an immense desert worm.

Lady Poe herself will tolerate no male suitor to the throne, nor will she allow a son to be birthed; she has used her magic, if necessary, to alter the sex of the child in the womb, or killed it on birth if necessary.

In a feud with the avatar Mardieur Mardieux, Poe lost many of her children in conflict; the minotaur who sought the path of Akquinarios took a certain pleasure in dispatching her agents and her daughters when traveling through her lands, and thwarting her necromantic schemes against Mercurios in the north.

Poe has one known daughter who has recoiled from her mother’s ways and (while still pursuing necromancy) seeks a way to atone for her family. This daughter is named Arvyllia Poe, and she travels with the rough Company of Khorst in the Syrgian lands to the far north. She also has a daughter in exile who is overly ambitious; Ennata Poe has expressed a deep and abiding interest in usurping her mother's power and taking it to the unnatural limit of evil.

Poe rules from Mordren, the capitol of her domain around the black waters of Lake Astrahar. Her chief general, Lord Cervicus, stands ready to engage in conquest or defense in the fabled Bastion of Castle Lost. Other prominent cities along the lake include Polahar, Tursos, and Pitch. South of the lake is the great swamp, in which the dreaded City of Skulls, an ancient college of necromancy, can be found. It is said that the first Dragosian necromancers fled from this city two centuries ago to start their own kingdom, and have feared to look back upon the region ever since, knowing what terrors can be found within. Rumors abound that the legendary Tomb of Horrors can be found deep within the great swamp.

Kasdalan may be so blighted because it rests in a region which was profoundly affected by Shaligon during the apocalypse, and some claim that the throne of the old empire from which Shaligon was most venerated could be found in the region. Beyond Kasdalan in the utter south lies a no man’s land which stretches in to territories feared by all, including the Weeping Lands, the Dreaming Plains, and the Dark Empire of the Seeping God.


Next: The Secret history of Lady Poe and Zam Redar