Tales from the Watchers of the Sullen Vigil: the Naga 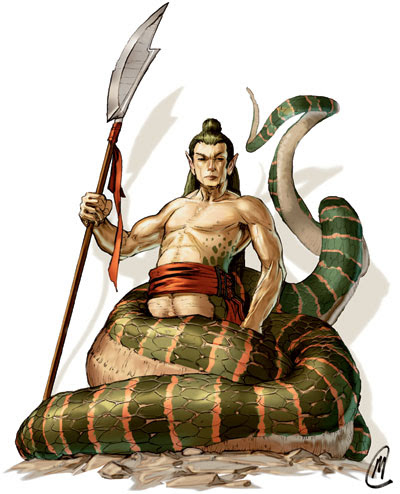 The Naga of Sarvaelen
Naga in Sarvaelen are an ancient race, cursed long ago with the serpentine traits that mark their lineage. Once, or so the story goes, the Naga were among the greatest of the old ones, the races that predate modern men long ago. A series of ancient tomes, most of which are now lost to history called the “Yavandreth Manuscripts” tell a bit of the ancient tale of the naga. A mostly complete  set of the four surviving tomes can be found at the Library of the Sun in the port city of Aramen, Aeronost’s southern port and capital of the so-called Stormsinger Coast province. There the lone monk Procosius maintains these books and remains the land’s foremost authority on Naga lore.
As legend goes, naga were once men, albeit of a breed of old that was naturally inclined to sorcery and spoke directly to the Old Gods, who were cast down during the Great War two centuries ago. Their ancient king was the sorcerer Kaliya, a powerful necromancer and priest of the old gods revered by his people. These four gods were said to grant great strength to the naga.

According to the Yavandreth Manuscripts, Kaliya did something to anger his gods. There are conflicting tales. One says he was to sacrifice his eldest child in honor of the gods and as a payment for his great necromantic talent, but he refrained from doing so and brought down a great curse upon his people. Another tale suggests something similar, but that it was his wife, Padmavati, could not bear to lose her child and so spirited him away before Kaliya could sacrifice the infant. Yet another tale says nothing of this curse induced by loss of sacrifice and instead suggests that the naga were formed when they sought to make a dark pact with the elder god called Dev Yama’Dragoth. Yama’Dragoth (known in later centuries only as Yama) granted the naga their wish, giving them supreme power and immortality as sorcerers, but in exchange he took their humanity, leaving only the twisted, serpentine forms naga are known for today.
Whatever their origin, naga appear to be half men and half serpent, often with strongly reptilian facial features and sometimes the wide, decorative “hoods” of a cobra enveloping their head and neck. Naga are fearsome to behold. Naga are known for their poisonous bite, also a shared feature with the cobra, and they are exceptional swimmers, albeit not aquatic, a common misconception among humans since the only known kingdom of the naga is to be found on the Isle of Stoneblight, where the naga city of Nagapuram can be found.

Nagapuram is an impressive, ancient city located on an expansive island about two hundred miles off the Stormsinger Coast in the Pavain Sea. The naga call the island Manak’tagar, and  defend it vigorously from outsiders; one must seek a benefactor to vouch for a foreigner who seeks to visit the island and it’s amazing city of ancient monuments. Stories of travelers, diplomats and merchants indicate that there are ten thousand naga within the city and probably three times as many slaves, usually of humans from the south eastern kingdom of Sammar, which does not normally disturb the citizens of Aeronost who have frequently had to deal with hostile pirates from that distant land.

The island itself is ruled by the so called Living Goddess who goes by the name of Padmavati, the mythical first queen of the naga. Whether she styles herself a descendent or a reincarnation of this first naga queen is unknown, but she does believe she is a demigoddess, imbued with the powers of the current naga patron deity, Manasa.

The naga are a potent force locally, and the diplomats of Aeronost have sought to keep them as allies rather than enemies. Still, the naga are so feared that the often do as they will, and treat much of the Stormsinger Coast as their own domain. This has often led to unfortunate bloody conflicts between the soldiers and naval forces charged with protecting the dominion of the Pavain Sea and the forces of Nagapuram.

In the region of Aelghast, there is a small community of about one hundred naga who have taken up residence in the subterranean caverns around a sacred hot spring that they call Uk’halat. The hot spring has been turned into a shrine dedicated to the seven-headed serpent god called Agharda, said to have devoured the original four naga gods of old and absorbed their essence. It is believed by this remote group of exiles that the seven heads of Agharda represent the seven kingdoms of the naga, spread throughout the world, and that worshipping this deity will reunite the naga into a powerful force that will resume the mantle of rule again.

This worship of the seven-headed god is regarded as heresy by the Living Goddess Padmavati, as it was only a century ago that the cult of Agharda was embraced by her people. This period led to a vicious war with the distant eastern empire of Kadatha, and nearly led to the destruction of the naga kingdom. As a result of this conflict Agharda’s worshippers were forced into exile lest they be hung for heresy. This branch near Aeronost follows the fanatical priest Yazzad Sydaris, and call their unique sects the “Sons of Sydaris” or simply Sydarites. They believe that Sydaris has a unique ability to channel the thoughts and speech of Agharda.

Because the naga are so ubiquitous throughout Sarvaelen’s lands, the appearance of one is not regarded with fear or suspicion save in the most remote regions of Aereonost and the other kingdoms along the Pavain Sea. As such, a naga character is certainly a possibility in play. 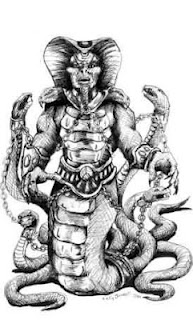 
Movement: Naga move at a speed of 10 meters and swim at a speed of 16 meters.
Attacks: Constriction (1D6+DB) or Bite (1D3+DB plus poison); Naga poison is Potency 15 vs. CON;  inducing paralysis for 1D6X10 minutes in the target (this effect strikes in 1D6 rounds); if a target is bitten more than once in that period each successive strike deals 1D6 damage directly and reduces DEX permanently by 1 until all HP damage is healed. Naga can only bite once before they must regenerate more poison; this takes 1D6 hours before the poison sacs in their cheeks are refilled.


Swimming: Naga base swimming score is 80%.


Hit Locations: use the same hit location chart as lamia (MoL); tails have the same HP as legs.


Movement: Naga move at a speed of 10 meters and swim at a speed of 16 meters.
Attacks: Constriction (1D6+DB) or Bite (1D3+DB plus poison); Naga poison is Potency 75 vs. Resilience, inducing paralysis for 1D6X10 minutes in the target (this effect strikes in 1D6 CAs); if a target is bitten more than once in that period each successive strike deals 1D3 damage directly to two random locations, and reduces DEX permanently by 1 until the damage is healed. Naga can only bite once before they must regenerate more poison; this takes 1D6 hours before the poison sacs in their cheeks are refilled.


Swimming: Naga have a base swim score equal to DEX+STR x 4.

A Typical Naga in Legend:


Naga are already in T&T, on page 27 of the 7.5 edition rulebook! If you are using an older edition, the stats are:


Naga Venom: Naga deal poison damage the first time they get spite damage in on any attack. The victim makes a save vs. CON equal to the level of the Naga or become paralyzed for 1D6X10 minutes (this sets in within 1D2 rounds). Additional spite damage is dealt as normal but deals 2 points for every spite to a paralyzed victim. Naga can only use this initial venom attack once before it must regenerate; the regeneration takes 1D6 hours.


Constriction: This naga attack deals 4 dice plus personal adds in combat. If the naga using this attack deals any damage (including spite damage) he can make a Save vs. DEX (usually equal to the target’s level, but the GM can decide) to grab and constrict an opponent. If he succeeds the naga deals its full HPT in damage to that target the next round automatically. The naga can keep the hold each round by making a STR save vs. the target’s level (or GM’s judgement) each round. If the naga critically fails a save during this process the target break free an deals it’s HPT for the round in damage against the naga instead!

Next Week: The Dragons of Sarvaelen....cthonic wyrms of the earth, the heralds of the old gods.....not your ordinary fire breathers....!
Posted by Doctor Futurity at 6:00 AM