Tales from the Watchers of the Sullen Vigil: Dread Zaravande


Deep in the wastelands of Camrinal, along desolate tracks of forgotten roads now half-covered in sand, there exists one particularly bold and dedicated keep, staffed by the heartiest of the Watchers of the Sullen Vigil. These particular watchers are all exclusively chosen from older knights of the order, especially those who no longer have family or kin to care for, or who have for whatever reason chosen to remove themselves from their former lives. Life this far into the wastelands is short and bloody; only heartbreak and mourning await those who still cling to family out here.

The Watch Tower of Zaravande requires a trek about one hundred miles deep into the wastelands, and few dare to make this trip.

When the Final War rolled to a close and the war mages of Camrinal called down unimaginable power from the skies, sundering the cosmos itself in twain for a period of time, it was said that the black and frothing energies of other dimensional realms cascaded uncontrolled down upon the empire, eviscerating the land and its people even as the power of the ritual spell bathed Camrinal’s foes in unholy fire. When the battle ended almost none lived, and the great city of Zaravande was a blackened expanse of ruins dotted by thousands upon thousands of skeletal remains. Whatever it was that oozed forth from the skies and engulfed Zaravande, it picked the flesh clean from the bones of every living thing within one hundred miles of the capitol.

The old stories say that “it” left; speaking of these unholy energies as if they were an entity with thought and intention, but some questioned that, observing that there is no evidence of any living witnesses to this event. Occasional tales from the deep recesses of the wastelands by maddened ghuls suggest that a handful of survivors, all changed into hideous half-dead abominations, claim to have seen the black energy writhe and coil about the land and its inhabitants, draining all creatures of life, sucking the flesh from their bones, before retracting once more into the rift in the sky. They claim that the rift never closed, and that it opens on occasion and feeds from the world below. It is tethered, these ghuls assert, over the ruins of Zaravande. Indeed, the ghuls claim that the pulsing darkness looms above, plainly visible to their eyes only.

The watchers do not try to assess the validity of these ghul folktales, but they do keep them in mind. Occasional night-time spectacles of light and shadow play over the city with no earthly explanation, and the entire domain is haunted by ravenous undead. The skeletons of two centuries gone have long since turned to dust, been covered in the encroaching sands of the ruined land or risen from the dead to stalk the living—and themselves.

Indeed, hundreds of risen dead from the old armies which both stood in defense of the Last Emperor of Camrinal as well as those who sought to destroy him continue their senseless fight long after death, as if unaware of their current state. The old dragon riders and their undead draconic mounts from the lost kingdom of Altenspar continue to bombard the city with ectoplasmic flame in the dead of night, sparring with troops defending from the crumbling walls. Ghosts and phantoms stalk the city streets seeking to escape the madness. It plays out in the dead of night, every night, until dawn…when with the first light of day, as if blasted by the unholy radiance of the Final Weapon, the undead disintegrate into dust once more until the following night.

Watch Commander Josheras Calliston has been in command of this garrison for seven years, a record by any standard of the Sullen Vigil, especially for the Zaravande Watch. He knows better than most the dangers of the city. He knows the vast catacombs beneath the ancient capitol, formed from centuries of improved civic works heaped on top of the tell-mound of ten thousand years of human and pre-human construction, have created an elaborate network of underground tunnels and passages; and that while the sun chases the surface undead away each day, the tortured restless souls and much worse continue to occupy the subterranean realms below.

Commander Calliston has no illusions about what and why the watch is here, that they are to serve but one purpose: to make sure that whatever it was that Camrinal unleashed upon the world does not return. Whether it was a force or energy ripped from other dimensions or a being of insatiable hunger, there is a persistent belief among his order that it, whatever it is, has not yet completed its task upon the mortal plane and that it desires intensely for someone to finish the ritual that summoned it, to allow it to break free of its tether within Zaravande to roam the world freely.

Over several decades, some truth to this fear has come from the persistent issue with cultists who will travel as pilgrims to the city. While some bold ascetics and flagellants of the All Mother Nevereth seek out the ruins and the dangers of the wasteland specifically to atone for the sins of their ancestors of Camrinal, the truth is that many more cultists arrive seeking entrance to the city to uncover the darker secrets of the Empire’s lost magic, and a few on occasion seek to uncover the lost secrets of the college of war magics, the source from which allegedly the Final Weapon ritual was devised. The Watchers observe these visitors, and either expel them or drive them out by force if necessary.

Ghuls occasionally prove a threat as well. The mindless normal ghouls pervade the city, an ever present threat, but the more intelligent and cunning ghuls seek to inhabit the lower regions of the city at times, carving out small communities in the labyrinth below. Not all of these ghuls seek escape from the surface world; some are as bad as the cultists, and seek to find hidden magic and power.

A curious phenomenon among the ghuls that some Watchers have discovered can be studied during the “transition of madness,” as scholars have called it. When a ghul at last begins to slip the tethers of sanity and descends into the realm of the feral, engaging in foul undead cannibalism with unchecked abandon, there is a short period from a few weeks to a few months during which their lucidity of thought directs them to make a pilgrimage to Zaravande, to “see the expression of the destroyer,” as they call it. The ghuls caught in this transition of madness seem to believe that the force or entity which destroyed the city is this so called destroyer, and a few have even admitted to feverish dreams in which it was revealed that they are its children. Eventually, though, their minds rot to madness and they turn to cunning but maddened cannibals of living flesh. Such ghouls do not evaporate with the daylight though they do not like it, seeking refuge in the city’s labyrinth below. The Watcher regularly mounts dangerous expeditions to slay these feral, maddened ghouls.

There are rumors and tales of other threats and denizens within the city. Zaravande in its prime had a population of nearly 500,000 of all races and ethnicities. It was the most powerful city in the world, and stood as the center of trade and commerce for Camrinal. When the ally nations united to bring down the Empire, it became the focal point of attention for the enemies of the Empire, and in the end it was the city under siege that prompted the war mages, under order of the Emperor, to call upon their most powerful ritual yet. The mystery of this ritual is lost now, but there is a story among the Watch that one of the war mages yet lives, a lich who somehow survived the transition of the city to its undead state while retaining his mind, if not his sanity. This lich is called Quermelain, and he is met on occasion by members of the order on patrol. His power is impressive, and the order otherwise leaves him alone, for to do otherwise would be to invite murder upon their tower. Quermelain, by contrast, has actually even assisted the watch on certain occasions and seems to despise the subhuman ghouls and their intelligent counterparts, going out of his way to destroy them.

Elsewhere in Zaravande is is said that an agglomeration of hundreds of skeletal remains appears at dusk and then wanders about the desolate sand-filled streets until dawn, comprised of hundreds of skeletal remains. This being kills all living entities in its path without mercy, then adds the corpses to its own mass. The watchers have seen it, but they wisely avoid any engagement with this creature.

There are many other oddities and terrifying encounters within Zarvande, about more of which shall be revealed at a later date… 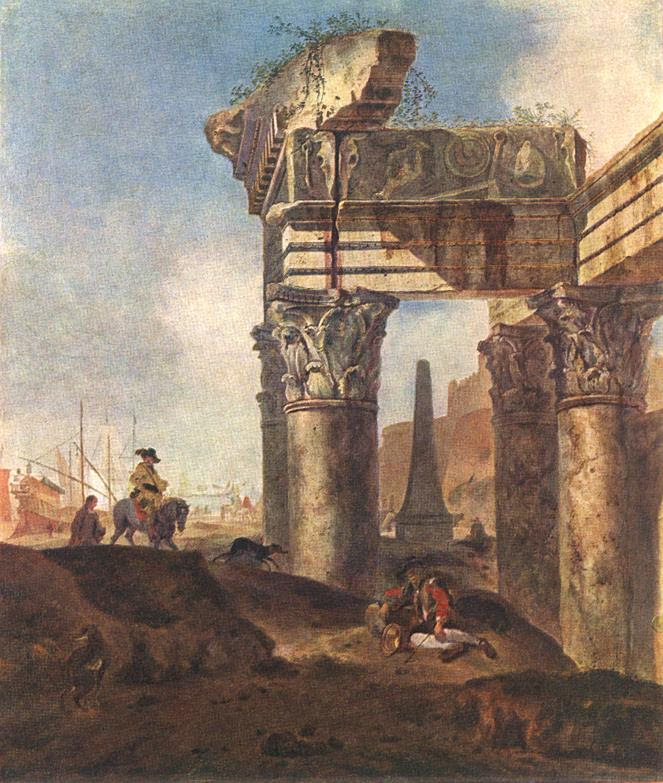 Next! The Lady of the Lost Lake and the dark secrets of the faerie of Sarvaelen