Choronzon Demons in Legend and 4E

This is going to sound bad, but I feel like I may have published this in the blog already although I can't find evidence of it. So here you go, maybe for the first time, or maybe for an encore: Choronzon Demons in both Legend and 4th edition.

Choronzon (Demons of Lamashtu) in Legend


The dreaded Choronzon come from the Outer Darkness and are said to have been servants of darker beings and entities from beyond time. The first chronzon appeared not long before the arrival of the dreaded being Molabal in the lands of Pelegar, predating humanity by untold eons, and that much later when the dreaded Lamashtu and her lamia kin rose to power she found these dark entities in the depths of the earth and bound them to her will.

Physically these are dreadful looking beasts with four massive, ape-like arms of pure corded muscle, vast bat wings, dark, stumpy heads with strange, vestigial insectoid eyes and a lengthy, ululating tail. Still, few see these dreaded creatures in their true form, for most choronzon take more pleasing, deceptive forms and then use their unique powers of domination to afflict themselves on the mortals they toy with. 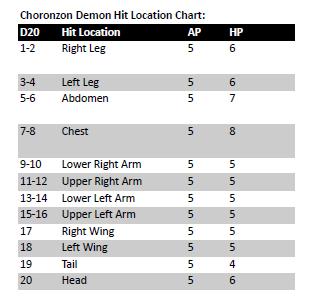 Common Magic 50%: typical spells include Bandit’s Cloak 4 (+40% stealth), Bestial Enhancement 4 (+20% attack and +4 damage) and Glamour 3 (to improve their social skills when masquerading as something else or possessing another).

Divine Magic: about 15% of choronzon are dedicated to Lamashtu, usually taking Berserker and True Weapon (Claw) for their abilities if they are of sufficient rank.

Dark Vision: In addition to dark vision, Chornzon demons can see in total darkness. without penalty, even if blinded.

Possession: Choronzon can possess a target, entering that target’s body if they succeed at a resisted Power vs. Persistence check. This requires 1 CA and 1 MP to activate. The victim is under total bodily control (but can still think, see and feel what is happening to him/her) while under possession. The choronzon’s own form is vulnerable while possessing another. There is no range limit once a possession is established. The possessed party may attempt a new resistance check once per hour.

Shapeshifter: Choronzon may take the illusory form of any dead being they have had contact with; this transformation takes 1D6 minutes. They may use the disguise skill (above) to ascertain the accuracy of their appearance when scrutinized. They are unable to emulate personality traits or memories, however.

Chaos Mutations: About 50% of choronzon demons have one or more chaos mutations 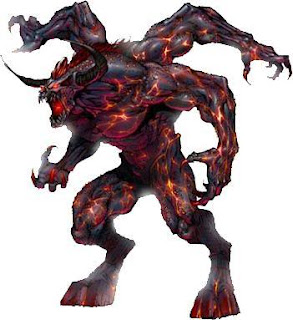 The choronzon demon appears in its natural state as a massive demonic humanoid wreathed in whispery tendrils of eldritch ectoplasm. The creature exhibits four powerful arms ending in scythe-like claws that appear to have hollow claw tips, into which it is said they can siphon off arcane energy. Arcane spell casters find that merely being near one of these demons makes them ill.

Choronzon demons manifest initially in the writings of the 16th century occultist John Dee, described as dwellers in the Abyss that serve as obstacles on the path of occult enlightenment that must be overcome. These “demons of dispersion” are formless in nature but can take on various physical forms when summoned to the mortal plane of existence.

While the Enochian version of choronzons might be true of the occult views in the mundane world, the choronzons are much more powerful as tempters and stealers of occult lore in the greater planar realms. Choronzons as presented here are shapeshifters and can become incorporeal at will, but in their true forms they manifest as twelve foot tall demons with four spike-like arms and an insatiable lust for arcane power, to be ripped from the minds of their victims through swirling, invisible arcane siphons.

Lore
Arcana DC 22 Choronzons are a form of demon that thrives on magic, siphoning off arcane power to strengthen itself. In its physical form it is a ferocious brute of a demon, but it can become insubstantial, and merely getting close to one can prove deadly to any mage.
Arcana DC 28 Some truly evil orders of sorcery force their acolytes to seek out choronzons and defeat them as a challenge to allow the acolyte entry into the inner sanctum of that order.

Choronzons In Chirak
This particular breed of demon is known to have appeared in the dark kingdoms of Pelegar, where they served the Lamia queen Lamashtu for a time. The legends say that they clawed their way up from a primordial realm, the domain of the first chaos gods called the Skaeddrath, and that the choronzons were spawned from the detritus of these ancient and terrifying titans. Among some arcanists it is regarded as a necessary ritual of passage for acolytes to seek out the summoning of a choronzon, to confront and destroy the beast to prove his worth to the order. 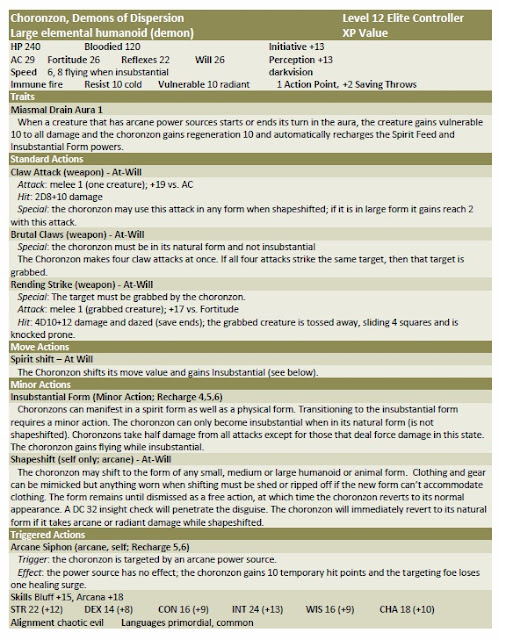