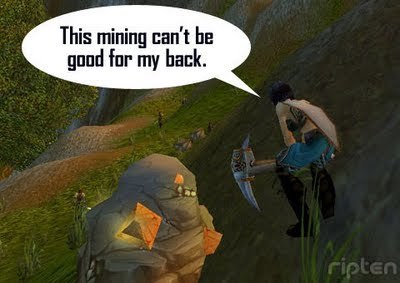 Just a brief update. Last time I took some time to talk (i.e. complain) about MMOs I was mostly happy to play a little WoW and that the kid seemed to enjoy sitting on my lap while I did so. That lasted about a weekend, as it turned out (playing WoW, that is; kid still loves watching whatever I play....he's also into grabbing the controller whenever its close enough). So I rapidly burned out. I just can't enjoy the game anymore, I have reached the point of no return, total saturation apparently. That, and I have conceded that while I like some of what Cataclysm brought to the table, in the end I really miss the game's feel, flavor, and amazingly enough slightly harder difficulty from the days of 2005. For some reason WoW feels dumbed down to an almost ridiculous level these days. If we were talking cooking, WOW is like an E-Z Bake Oven. (This may not be true for endgame content.....but I'm a ultra-slow leveler who likes the 1-84 process to actually be a fun challenge as well and not just a speedbump on my way to raiding. I hate raiding.)

I don't want my MMOs to be too hard, or too party-focused.....but I do want to feel like there's an effort at plot, pacing and just a smidgeon of system mastery. Blizzard has gradually stripped almost all of that out of WOW. And now I'm hearing ugly rumors from people that the beta for Mists of Pandaria is turning out to be a huge disappointment. As my wife put it, playing MoP only made her want to go play Guild Wars: Factions, instead. Not a ringing endorsement.

Aside from realizing my time with WoW is officially over (I even deleted it), I tried Champions again and found that Perfect World's attempt to merge accounts had made a mess of mine. Once I got it sorted out I found that they had apparently added Champions' version of a random dungeon finder, which was cool, but for some reason I found the game tedious and exhausting this time around. Moreover, I found the game itself continued to run processes in the background even after I'd closed it out. Steam says I played continuously for four days straight. I don't know if this is glitchy programming or something sneaky...and now that Champions is part of the Perfect World fold I'll believe either option (never loaded a PW game that didn't act weird). So I deleted it and moved on.

DDO was up next. I want to get back into DDO, but the tedium and grind is preventing me from caring. I could level up still more of my 20 characters to past level 10, or I could play one of my two existing level 10 or level 12 characters and see how many eons it takes to get to level 20 in time for the forthcoming highly nonsensical "Drow fuck up the prime material plane" plotlines in which only the heroes of Eberron can save the Forgotten Realms or something....I mean, it's the kind of lore blending that induces headaches in anyone who even remotely cares (I don't even care and it causes me a headache in the same way I hate poorly done what-if alternate history fiction). So when a game causes physical pain at the sight of a mere loading screen, time to move on. But I'm not deleting DDO yet. I want to play....I just want to feel like there's a chance I'll see some new content I can actually get to experience some day. 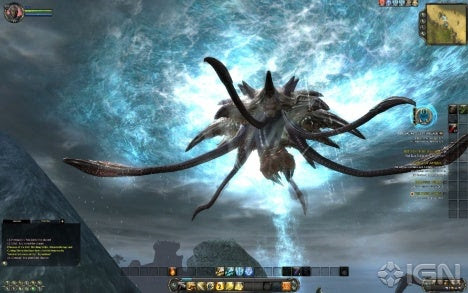 So anyway, I accidentally got into Rift and am now really, really hooked on that game. I also accidentally fired up Star Wars: The Old Republic again with the free game time being extended right now to lapsed players and am being reminded of how amazingly well done it is. I want to resub to SWTOR, just trying to balance my free time issue with it is the only issue.

Rift, however, is exactly what I needed at this time, it turns out, and I love the game's backstory and premise, featuring two philosophically opposed groups facing a common menace, but unable to reconcile their methods of dealing with that threat. I love the rift concept itself and how it works, I love the graphics, I love the amazingly flexible and not at all dumbed down soulshard system for class combinations and the fact that I can run two different fighters who don't even feel like the same class as a result. I also love the rogues, which are much more fun than any other rogues I've seen in fantasy MMOs (barring DDO's amazing rogues, but, well....D&D rogues, of course they'll be fun!)

So anyway, my Tuesday news isn't really much more than: guess I'll be taking a bit of a break from the single player games to focus on Rift and possibly SWTOR for a while. This ought hold me over until Guild Wars 2 arrives in June, at least!