Not much to this post other than a brief follow-up to my earlier post a couple week back about Resident Evil: Operation Raccoon City (RE:ORC). When I discussed it before I was sort of on the fence....the game looked like it had the potential to go either up or downhill, and I wasn't entirely sure how it would work out. Well, as luck would have it I've found I really am enjoying the game. It's not conventional Resident Evil as we all know the main series, and those decrying it for failing to be a proper part of the "numbered" portion of the series are missing the point (they might as well complain about the on-rails shooters in the RE series that propogate like gnats on the Wii, for point of example). But it is an amazingly fun Left 4 Dead style shooter flavored with some really awesome Resident Evil pepper sauce.

Anyway, the game managed to capture a real sense of survival and desperation, as well as still making zombies (even the staggering and slow RE zombies) both startling and dangerous to a gang of professional, well-armed killers. I have actually felt that special "magic" one occasionally gets when a game manages a keen synergy....that sweet spot where you are in the moment, and forget for a bit you're playing a game. I like that. So yes, I am endorsing RE:ORC and suggest everyone who didn't like its style can wait for Resident Evil 6 later this year. Me, I love them all (except for those rail shooters) so I get the best of both worlds. 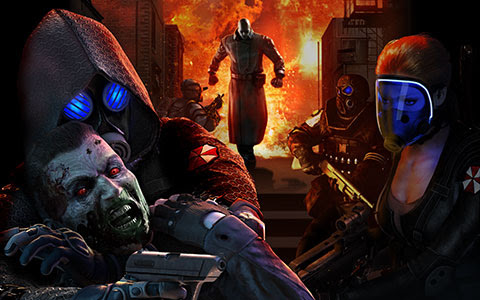 Posted by Doctor Futurity at 12:00 AM