I worked out this campaign outline a while ago and never ended up going anywhere with it. It's fairly setting neutral, but it is situated in the Warlords of Lingusia campaign (and could just as easily work in any era of the campaign). Enjoy... 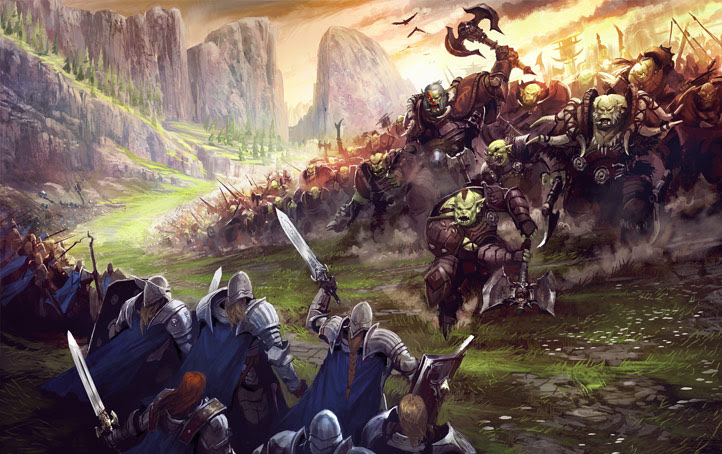 Deep in the Halale Wilderness, along the edge of Mitra’s Woods lies the remote barony of Osterman. Here in the town of Gray’s Retreat a hardy folk live, skirting constant danger for the local profits from a very prosperous mining operation as well as a local timber mill.

The town of Gray’s Retreat wasn’t always such a prosperous location. As the story goes, Lord Gray Osterman in his youth forged out in to the wilds, far away from the comfort of the provinces of Octzel proper, skirting the very edge of Mitra’s Woods to seek his fame and fortune. With him was a small company of loyal soldiers and allies who believed in the young baron’s cause.

The troop of men led by Osterman eventually happened upon a lush region of hills and woodlands in Halale, where they settled for a time, while the baron and his advisors decided upon a course of action. The stone in the region was plentiful and useful for construction, there was no end to the harvestable wood and a nearby river provided fresh water. It was clear to the baron that this was an ideal location to build his remote keep and establish a name for himself.

Only Osterman’s eldest advisor, the seneschal Grimark, suggested otherwise, pointing out how dangerous the region was and how close the hills were to the ominous Mitra’s Woods. The baron paid no heed, though, for the old terrors and mysteries of the land were largely unknown to him and his men.

For months the baron and his men labored to build a keep, and a small settlement of his loyal soldiers and soon their families began to spring up around it. During the first new moon of the third month however, a small army of monstrous beings descended from the hills upon the settlement and attacked, burning houses and pillaging in the night. Dozens of people were killed or kidnapped, and though Gray’s men mounted a strong defense and drove the beasts away, the damage had been done.

With morale at a new low and many suspecting that the seneschal was right, Osterman took a squad of his best soldiers in to the deep woods of the hills to follow the trail of their attackers to its source. He eventually happened upon an ancient castle, overlooking a hill riddled with shallow caverns and an occasional, deeper warren that appeared to delve deep in to the earth. They happened upon a small tribe of orcs and engaged in a brief skirmish, after which prisoners were taken and an interrogation of one of the captured warriors revealed that the hill was called Zaidan’s Blight, and it was shunned even by the orcs in the region. \

“Zaidan dwells here,” the orc said in his crude mastery of the human tongue. “Zaidan is evil, in a way my people find disturbing.” This news left Gray and his men with a new determination. He let the orc go, and told him he would demand peace from the orc and his tribe if he braved Zaidan’s Blight and put an end to the evil. The orc agreed.

What happened when Zaidan and his men journeyed up the hill and smashed their way through the ancient gate to enter the courtyard of the ruined castle, none can say. All that is known is that Gray Osterman and his men spent three days inside, and when they at last emerged, half of them were dead and all had a haunted look about them. Gray returned to the settlement and resumed building, stating only that the evil was gone, for as long as he lived. About this he was right; the settlement prospered, and turned in to a thriving township named Gray’s Retreat after rich gold veins were discovered. Soon the young barony was recognized by the King of Octzel, and the baron and his family became very wealthy and important, even in so remote a location.

The story of Gray’s Retreat and its early years is known to all locals. Recently, sixty years after the incidents which happened in those first months, Lord Osterman came down with a terrible illness that ate away at him and in months he went from a strong 85 year old man who had lived a full life to a hollow shell. He at last perished, and a funeral was held the next day, with his body interred in the fresh family mausoleum, blessed by the local priest of Death, the Nameless One to insure safe passage to the afterlife. All seemed well, and his immediate heir, his son Davin Osterman, who had already been participating in managing the barony stepped up to the task in a public ceremony two days after the funeral. Davin was already an older man at age 60, being the eldest son, and he was no longer in much condition to fight, though he had a son and daughter who handled such affairs for him.

Eight days after his burial, a new raid took the township by surprise. In the middle of the night an army of monstrosities, including chimeric creatures ridden by mihidr trolls as well as ground forces consisting of wolven and goblins descended upon the town and attacked. When the monsters were at last driven away, it was determined that several dozen townspeople had been killed or kidnapped once more, and even stranger, the Osterman family Crypt had been smashed open and the body of Lord Gray Osterman had been stolen away! This blashphemy drove Davin Osterman mad with rage, and he rode off in to the deeps of the woods, where his father had gone so long ago to find the mysterious hill and castle known as Zaidan’s Blight. He and his force of one hundred men were never seen or heard from again.

Now Erik Osterman, son of Davin, has been forced to step up to the mantle of baron while his father is absent and possibly dead. On the day the PCs begin the adventure with their arrival in town, a strange messenger from the hills appears. The misshapen goblin bears a scroll, from which he reads a new proclamation.

“Lord Zaidan has claimed the soul of Gray Osterman, lord and Baron of these lands!” The goblin cackles. “Per his agreement with the late Lord Osterman, all of the lands under his lord’s barony are now Zaidan’s to claim. Let any who would oppose his great and evil master step forth, to be struck down at his convenience!” The cackling goblin will then toss the scroll down and try to make good an escape, certain that the humans of the town will try to kill, capture or enslave him.

Thus does the adventure of Zaidan’s Blight begin, with Erik Osterman declaring a great reward to the first hero who puts down the threat of Zaidan once and for all, and possibly deliver’s his father’s and grandfather’s bodies back to him, for he has no hope his father yet lives.