Quick and Dirty Dungeons in Legend 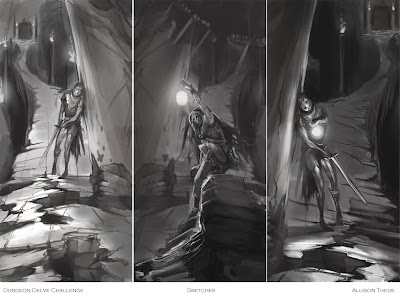 One tool I like to use for those "lets see what's over here moments" during the meanderings of adventurers off the beaten path is to develop some encounter and trap charts, the design of which is to provide a quick and efficient way to "fill in" unexpected detours and byways on the quasi-hexcrawl style games I am running. The charts aren't always that horribly original, but they can give a nice variety of interesting traps and encounters to sprinkle in some random dungeon at a moment's notice. Just grab one of the countless fine maps off of the internet and fill it out with some random rolls, and walla, a quick dungeon delve for those moments when your party notices the odd mark on their map of an ancient ruin or lost keep, which you don't even remember putting there...just remember that, for Legend games, your PCs should always have the option to flee when they find themselves at last overwhelmed....!

Roll per location: 1-6 empty, 7-10 Roll for trap, 11-20 roll for encounter. For every 30 minutes of rest there is a chance of an encounter (treat trap result as no encounter), and once per hour for extended rest.

A Character who spots any of the traps below before triggering them can attempt to disarm them using mechanisms (unless it doesn't seem appropriate). The mechanisms check is treated as an opposed roll against a value of 50 (assume 50 is the trap maker's skill value at setting it). Failure triggers the trap. Critical failure means the character takes the full brunt of the attack and maximum damage.

There is a 25% chance that a triggered trap will alert a nearby patrol of monsters to arrive in 1D3 rounds.

<><><><><><><>  <><><><><><><>  Sample Dungeon:
In the tradition of random dungeon generators everywhere, I now offer you a completely random dungeon keyed to the above map. Fill in details to make it your own....I have sketched out a background for my own purposes, but its completely alterable, of course....I reccommend the ever useful Engineering Dungeons by Troll Lord Games for dressing and fleshing out rooms if so desired. I thought about doing it but decided I was feeling a bit lazy...then I redid the entire thing anyway, so its more a "fleshed out dungeon based on some random rolls," but you get the idea!


The Temple of the Shambling Dark:
This fairly notorious cavern is located about thirty miles north of Uralhat, just off the coast along the remote island of Varana’del. The stories say an ancient entity was once worshipped here by the cult of the Diurnan Spearmasters, a cannibal group in the islands which has all but been driven extinct in recent years by the Uralhat Navy. They reportedly worshipped something they called the Usu’Vanar, which roughly translates in to the “Shambling Dark.” Recently, however the fishing village of Cotairn has experienced a rash of disappearances, and some fishermen have spotted mysterious beings cavorting about new bonfires in the dark on the island…

Doors: All doors may be locked (50% chance); A normal Mechanisms check can be made to unlock or a Brawn check at -10% to bash it in.


1. Main Entry Chamber
6 zombies, the remains of prior adventurers who were killed, their bodies dumped her and restored to unlife as vile guards.


2. Empty Chamber
Roll for a chance of a wandering encounter/trap.


3. Chamber of the Wretched Spawn of the Shambling Dark
Deadly Crawling Mold fills this chamber (see encounter entry 5 above). 40 SP, 4 GP, 2 gems worth 50 SP, and a suit of chain mail litter the floor, left over o prior victims.


4. Chamber of Offerings to the Spawn
A Falling Spike Bar Trap is rigged up in this room. If the PCs befriend any orcs wandering the complex they will mention this trap, which they say is set by the ghouls that are obsessed with the dungeon.


5.  The First Priest Chamber
One old ghoul sorcerer and three zombie servants are digging through rubble in this chamber. He is not hostile and will happily barter if the adventurers are friendly. He will explain that he is looking for sacred artifacts of Usu'Vanar for use in his magic. He has 70 SP, 5 GP and his sorcery tome on his person as well as a ring of disruption.


6. The Second Priest Chamber
Three Diurnan cultists and one priest are squatting in thsi chamber. They are bartering with the ghouls, letting them search the rubble for coin, and have accrued 200 SP in coin.


7. Empty Chamber
Roll for a chance of a wandering encounter/trap.

8. Empty Chamber
Roll for a chance of a wandering encounter/trap.

9. Empty Chamber
Roll for a chance of a wandering encounter/trap.

10. Chamber of Pain
Torture chamber. Someone has rigged another falling spike bar trap within. The center of the room has a moldering ogre corpse which has been picked over except for its Belt of Ogre Strength (see exotic item 18).

11. Hall of Suffocation
This long hall is randomly trapped with pressure plates releasing Poison Gas (see trap list). There may be evidence of other victims inside. The passage either leads to a lower dungeon level or a hidden exit (GM's choice).

12. Chamber of the Heretics
Four zombies stagger about, directionless until they sense living flesh nearby. One zombie has 1 GP and 1 gem worth 100 GP on its person as well as a curious holy statue worth 450 SP.


13. Guardian Passage to the Upper Ruins
A gargoyle servant and its two ghoul masters are carefully excavating this chamber; a collapsed roof shows where passage to the outdoors has been revealed. They are suspicious of anyone who enters, apparently being in competition with other treasure hunting ghouls in the ruins. They have had little luck so far and have no money or relics yet to show for their effort.


14. Incineration Chamber
This chamber contains a fire burst trap (centered on a chest in the corner) that was rigged by former treasure hunters (roll for coin on the trap table).


15. Empty Chamber
Roll for a chance of a wandering encounter/trap.

16. Empty Chamber
Roll for a chance of a wandering encounter/trap.

17. Empty Chamber
Roll for a chance of a wandering encounter/trap.

18. Empty Chamber
Roll for a chance of a wandering encounter/trap.

19. Scorpion Den
2 Giant Scorpions (a pair) prowl this chamber, seeking to make it a den.


19. Pit of the Silent Guardians
This chamber contains first a hidden pit trap, and at the bottom of the pit are 10 skeletons. Amidst the rubble at the bottom is one squat stone idol of gold and silver worth 510 SP.


20. Incineration Chamber
Another Rigged Fire Burst within this chamber, which was used for dire unknown purposes in ancient times. There are 41 SP scattered on the floor, and a serrated great sword.
21. Chamber of Secrets
5 Goblins prowl this chamber, which has stuccoed walls depicting ancient religious rituals. The lead goblin is a mage and while they are suspicious they won't immediately attack without provocation. The goblins have 40 SPs. Close study of the wall imagery reveals that there is a random sorcery spell inscribed on the walls (a copy could be made).


22. Pit of the Silent Guardians
This chamber contains first a hidden pit trap, and at the bottom of the pit are 10 skeletons. Amidst the rubble at the bottom is one squat stone idol of gold and silver worth 510 SP.


23. Temple Chamber Usu’Vanar
A large statue of ancient Usu'Vanar rests in the center of this chamber, a squat four-armed demon god with a belt of human skulls. An altar rests in front. No doors in this chamber will open unless the statue is first made an offering (worth 1 gold piece) by placing it on the altar. There is a naturally magnetized pressure plate on the altar, and a ferrous coin will trigger it (Perception -20% to detect before triggering) which will open the door to area 26; all skeletons will then march out to attack. The statue has two large ruby eyes worth 250 SP each. The idol is gold plated, and with great effort it could be melted down and is worth 100 GP.


24. Disposal Chamber
This disposal chamber and water closet of old has been renovated into a hidden pit trap. At the botom can be found 130 SP, 1 gem worth 200 SP and a 50% chance of one random exotic item.


25. Chamber of Nazdras the Transformed (gargoyle)
This chamber contains a single ancient gargoyle servant of Usu'Vanar imbued with the Lighting Strike divine spell. He is the last living priest of the lost god, and will seek to convert any who enter the chamber and destroy any infidels who would seek to loot the tomb. He is not fond of the ghoul looters (or the goblins).


26.  Barracks
12 skeleton warriors wait in the darkness to destroy any who would anger the idol in room 23.


27. Chamber of the Undead Priests
Here 6 zombies that were once priests have risen and now rest, waiting for the presence of living flesh to awaken them once more. One has a serrated ritual dagger.


28. Prisoners! Here the captives are held for eventual sacrifice (2D6 human commoners); the village of Orenost will pay 500 SP for their safe return (worth a bonus IP per PC for rescue).

29. The Sacrificial Pit! If the PCs have made it this far they ought to be greeted with a special encounter, with Usu'Vanar itself, some sort of bound demon possessing the body of a child that is held in the deep pit in the center of the chamber. Usu'Vanar tries to lure the adventurers to free it with a blood sacrifice in exchange for a wish...something suitably exotic and risky, yet still tempting.... All it needs is someone to help it out of the pit...PCs that let it free or feed it blood will watch the shadow demon burst free of the possessed child! Make it a suitably hideous demon rolled from Arcania of Legend: Blood Magic or worse if you want to make it a fight to flee from. For something especially exotic borrow a monstrosity from CoC's Malleus Monstrorum! If you have MRQ4's Legendary Heroes book, there are some excellent and terrifying sample demons within that can be used, too.

(Okay so I cheated on this....got a little too into fleshing the random rolls out...)
Posted by Doctor Futurity at 6:10 AM