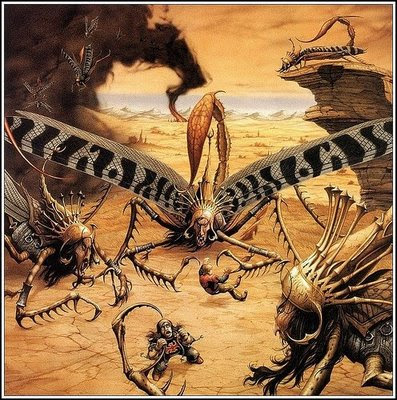 And with the Locustoids my Isomular Month ends. Perhaps someday in the future I will get a chance to design some more material for it should inspiration hit...or even get to at last run a campaign in this setting! Who knows...

Jumping: Locustoids can move by jumping with their powerful hind legs. They are built for landing, and do not sustain damage from a controlled fall of 100 feet in height or less.

Short creatures of about 3 feet in height, locustoids look much like their name (chosen by men long ago) suggests: short, humanoid locust men, with two strong hopping legs and four lean but armored arms, the locustoids lack the ability to do much damage with their limbs, but they become pretty good swordsmen in short order.

Locustoids are fairly intelligence pests, once the throw-away race of the Isomular empire, now a strange mixture of menace and cheap labor. Locustoids breed like flies, literally, and if a Hive queen of the locustoids sets up shop in the area, they can multiply in to the thousands in short order. After enough of them crop up, they start getting grand visions of conquering the world, which is only made impossible by their thorough lack of loyalty to anything save themselves and their queen.

Locustoids which have been neutered so as not to be able to breed (male locustoids are necessary for the queen’s eggs to be fertilized) and female locustoids which have been “snipped” so that they cannot ever transmogrify one day in to a locustoid queen are considered perfectly decent creatures to live with. Most human lands either tolerate them as cheap labor or enforce laws enslaving them. In the wilds, locustoids that are not regulated can quickly get out of hand, and some entire cities have been overwhelmed by enraged locustoids searching for food for their queen.

When not under thrall to a queen, the locustoids are pretty agreeable, friendly folk who often dominate social scenes and take on rapacious, insatiable appetites for entertaining and being entertained. They are also known for their thievery, and some make excellent scouts. Locustoids almost always wear some mark to show that they have been “fixed” so that they are never mistaken for wild locustoids.

Powers: Each queen has a unique set of powers, of one or two particular foci. Choose 6 powers of Power Rank 13; Save DC 15

The enormous 25 foot long queen of the wild locustoids is an immense, bloated version of her tiny children. She can lay hundreds of eggs a day, and the males can busily fertilize the eggs, which will in about six weeks hatch to create a veritable army of locustoids. The ravenous young need food, which the elders bring to them. Given that locustoids only need about three months to reach full maturity (3 feet tall), it doesn’t take long for a queen to generate a ravenous army of loyal kin.

Most queens live delusional states of fantasy. They are always transmogrified females, which undergo a process wherein a chemical is released in to their body sometime after their fifth year of life (occasionally later). They enter a chrysalis like state and emerge three weeks later as a young queen. After another few weeks, they have eaten enough to gain the mass necessary to begin producing eggs. The queen looks essentially like an enormously bloated version of a normal locustoid.

Most females intentionally cut out the chemical sack which activates their chrysalis stage, but a handful embraces it, seeking to flee in to the wild to become new queens.