The Rising Dark in T&T

T&T is a game I've played and enjoyed a lot over the years, but I haven't written much for it recently, and I'd like to change that!


T&T is one of the longest -lived and second oldest fantasy RPGs out there, and I have a lot of cool ideas for it I'd like to express, so I'm going to make Fridays my T&T regular column for a while, see if people are interested. This week has some notable NPCs, and next week has some combat rule ideas I was toying with. I may have a solo or two down the road, and definitely a couple GM adventures.

Fun fact! I at one point adapted my Rising Dark: Agraphar campaign for use with T&T. Here's a few of the notable NPCs and their T&T write-ups for use as-is or in conjunction with The Rising Dark (which is, while written for Swords & Wizardry, easily adapted to T&T or other fantasy systems): 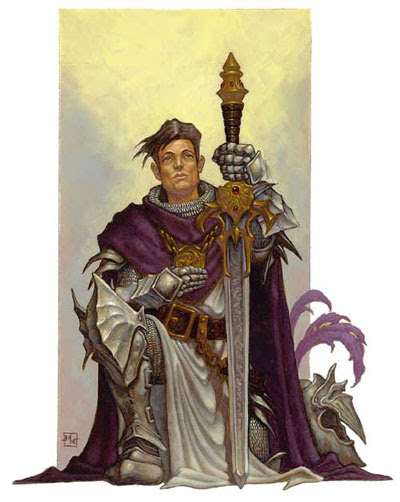 
Human Warlord of Aruthain; Level 6 Warrior; Male, 6’4”, 225 lbs. age 44; sandy brown hair and beard with streaks of gray; rugged good looks, a weathered “younger than his years suggest” quality, and a haunted look in his eyes.

55,000 gold pieces in coin and resources, one barony and a garrison of 2,200 men throughout

Vatarios Drathan is sometimes also called “The Butcher of Calithar,” after a barony that rests between the Giants Rest Mountains and the border between Aruthain and the Kadoskaric jarldom of Nimdar. He earned his reputation twenty years earlier during the border wars, when he was given control of the barony after his father fell in battle to the witch woman Shesiria. Since then, Vatarios managed to drive back the northmen invaders and sought out the woman who first enchanted and then slew his father. Shesiria had traveled north, where she took refuge in the region of Lichemark, a region crawling with undead under the control on the necromancer Crotus the Devourer. As the story goes, Vatarios invaded with a force of his own men plus northern mercenaries he had paid off after the sacking of Nimdar, where he engaged in a protracted siege against the necromancer and his shambling minions. The battle lasted for five years, and it was not until Vatarios pledged his servitude to the church of the Sun Fury that he gained the aid of the fanatical templars and was able to at last storm Crotus’s fortress and overthrow his reign over Lichemark. Only one mystery remained, however; the witch that he sought revenge against had disappeared, and was never found again.

Vatarios today is older and wiser but still said to be a madman on the field of battle. He is obsessed with keeping his kingdom clean of heresies and monsters, and will readily hire adventurers to seek out rumors of such and put them down. Although he is ostensibly only the ruler of the barony of Calither, he has continued to exert influence in the jarldom of Nimdar where his son Tanos Drathan is married to the Kadoskar princess Jradda, and he keeps the old Fortress of Crotus under careful watch, with a garrison of his men stationed deep in the territory of foul Lichemark.

Vatarios earns his titles of slayer and butcher from his reputation for ruthlessness against his enemies, but he is also notorious for hunting and killing known wizards and witches in his lands. Although he holds a grudging respect for some sorcerers, it is generally frowned upon, and his deep-seated hatred of the woman who slew his father has left him bitter towards all practitioners of magic.

Vatarios can serve as a patron or enemy to the PCs, depending upon what they get up to in his realm. Wizards and other spell casters might have more to fear from him, or at the very least will have to prove themselves to a greater to degree than the fighters, rangers and other adventurers in the party. Vatarios most strongly respects holy men, especially those dedicated to the god Ymaltar, to whom he converted some years ago after the templars of that order impressed him with their fanatical dedication to the destruction of evil.

Aramus of the Third Eye

Spells: All spells of levels 1 to 3 as needed

Dagger of Infernal Possession (Sax dagger 2+5; targets wounded with the dagger must make a L3 Save vs. Wiz or Luck, or become possessed by a demonic spirit and will now fight mindlessly for Aramus for 1D6 turns)

2,500 gold pieces worth of flashy jewelry

One ring of All-Sight (The ring can reveal images to its bearer of distant locations, so long as Aramus has seen or met an individual who has moved to this location; in this way he spies upon the entire barony through his agents; Requires 1 Wiz to activate and 1 Wiz to maintain per turn)

3 potions of invisibility (Hidey Hole, lasts 1 hour each) and 3 potions of healing (each heals 10 Con)

Aramus of the Third Eye is a notorious villain in the realms of Aurthain. He once founded the so-called “Cult of the New Darkness” in the Capitol itself, and instigated years of worship of the dreaded god Dymachas, a being so hideously evil that feverish worship and sacrifice can lead to a shattering of the dimensional walls, allowing vile entities from beyond time and space to seep in to reality to corrupt and destroy it. Although his order was at last put down, Aramus escaped, and fled northward, until he at last came to a small cave in which the vile dark elf druidess Phaedra lurked. Here, he rested and recovered from the wounds inflicted upon him by the Agents of the Crown when he had escaped, and was fed strange brews by the mysterious druidess, that led him to both heal and experience profound visions. In one such vision he saw the temple of Israthor, and felt the sublime dreams of that ancient mind calling to him. Aramus became obsessed, and through her fascination for him so too did Phaedra.

Aramus now operates his cult within the barony, seeking the elusive Zigurrat of ISrathor, deep beneath the bowels of the earth. He has determined that the dark god plans to impart a portion of its infernal essence in to a newborn child, and that this child will soon be born, acting as the voice and body of the deity, allowing the cult to find his tomb at last. Presently his cultists are seeking out this child, which according to the divinations should be born any day now.

Aramus has taken over a wing of the ancient elvish ruins of Kerys, and relies on Phaedra to provide him with dark elves to help in searching the underworld. His human cult followers move throughout the surface world, and he has sent his most trusted agents to the Goblinsmark to recruit mercenaries from among the foul goblinoids of the mountains.


All Contents of this article except artwork are Copyright 2012 by Nicholas Torbin Bergquist, all rights reserved, and permission granted to replicate for personal non-profit use only. Derived from "The Rising Dark: An Introduction to Agraphar," published under OGL license 1.0a
Posted by Doctor Futurity at 6:00 AM