Notable Tomes: The Disappearing Spoon, Armored, Voice of the Whirlwind, The King's Bastard and Starship

I read a lot, but haven't talked lately about some of the better books I've been enjoying. It's been a bit tougher with a kid lately to find that "quality quiet time" to actually enjoy books, but the Nook Tablet has helped facilitate this a lot.

Among the books I've been reading lately is The Disappearing Spoon, a fantastic bit of science reading in which the author, Sam Kean, takes us through the periodic table in a historical romp through the more entertaining tales of discovery, delight and woe in chemistry. From Madam Curie to mercury he does a great, readable and entertaining job of presenting interesting bits and pieces about the history and evolution of the periodic table. The last time I took a formal class in chemistry was 1989, so this was both engaging and illuminating.

For me a lot of science reads are "chapter here and there over a few months" as time and interest permit....but I plowed through this one quickly, it was hard to put down. I'll be looking for Kean's next work when it comes out later this year. 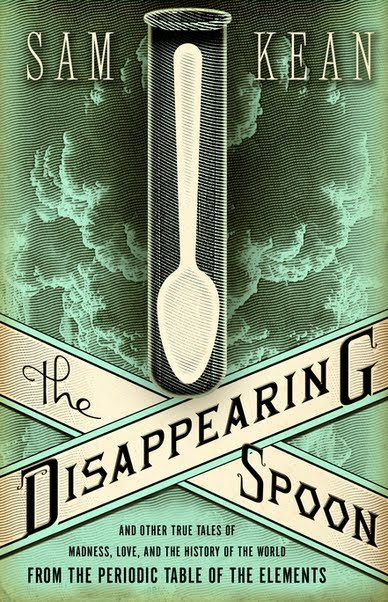 If you have a Nook or just want to pick it up in epub format, Walter John Williams has been re-releasing his vintage SF from the 80's and early 90's in electronic format. I have re-read Voice of the Whirlwind, about a clone of a professional soldier who awakens to find that the last decade of his host's memories didn't make it back with the "awaken when I die" ticket, and the troubling mystery that ensues. Good stuff, and still very readable and relevant today.

I haven't started it yet, but I have Hardwired (one of my all time favorite novels back in the early 90's during my Cyberpunk 2020 phase) scheduled for reading one of these next weekends, sleepy baby permitting.

Anyway, take note that these editions of Williams' books are optmized for e-readers and have some nice new cover art. For example:

Also out at Baen.com is Armored, a collection of tales edited by John Joseph Adams. I'm digging into it now but its got some of my favorite authors in there, including Jack McDevitt and Alistair Reynolds. Anyway, if you like a little high tech military action and heavily armored homages to Starship Troopers running around in your fiction, this is a great collection. 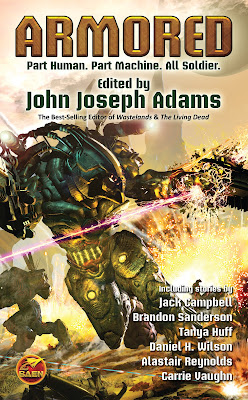 In the category of fantasy fiction, I've been reading and enjoying (oddly enough) Rowena Corey Daniels' Chronicles of King Rolen's Kin trilogy, the first book of which I have plowed through being The King's Bastard. My wife would love this series, I think, and I've been trying to get her to read it. Although on one level it's not the sort of novel I would ordinarily have tried, the fact is that Daniels is a good writer, and her characters quickly came to life for me in a way a lot of heavier fantasy trilogies tend not to, so I've been enjoying it and plowing along. The entire trilogy is available for cheap in ebook format, too.

I stumbled across an old review I had posted online and thought that I could offer up this review of the classic novel Starship by Brian Aldiss once more...but this is one I did read several years ago (and have periodically re-read ever since I first discovered it back in the early eighties). 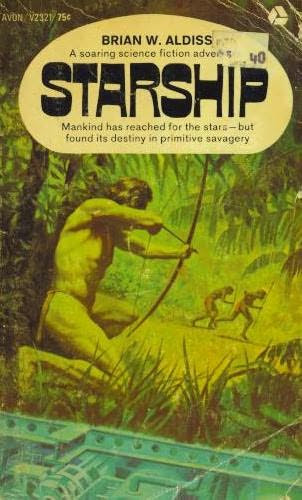 Written in 1951, Starship is an early science fiction work by Aldiss, featuring the story of a generation ship which loses its roots, degenerating in to a primitive society in space. The tale is told through the perspective of a young hunter, who embarks on a journey that gradually exposes the greater mystery and hidden secrets of the ship. The tale culiminates in a finale in which the primitive societies of the damaged ship are forced in to inevitable change as the vessel fulfills its purpose, more or less.

Aldiss' tale came years before Sputnik, and it holds up well over the years simply because the story, relayed through the eyes of primitive survivors of the unknown cataclysm that befell the ship, are unfamiliar with the technology surrounding them, and so the tale manages to transcend the sometimes troubling problem of antiquated tech in vintage sci fi. Issues of mutation and change are also raised in the book, and an occasional oddity, such as telepathic mice, pop up at odd moments. The story, true to form for the period, remains on track and doesn't tend to get derailed with too many additional details, but more than enough to convey the sense of the strange and unusual.

To enjoy a classic tale of a generation ship gone wrong (maybe even the first, I couldn't say for sure) as well as the novel which was a major inspiration for the role playing games "Metamorphosis Alpha" and "Gamma World," definitely find and read Starship. The later novel, "Hothouse" is even better, and if Starship is your cup of tea, Hothouse will be a gem to find, too.
Posted by Doctor Futurity at 6:00 AM