Botcon: A look down the rabbit hole for Camazotz

Weird! Apparently Botcon is a real thing, and there really are some hardcore, dedicated fan collectors out there. I mean, I figured this existed....but its funny to realize that there's yet another branch of geekdom (that I once, loooong ago had a connection to) which still exists. This must be what it's like when I talk to some guy at work or in a decidedly non-geek context and mention I am into RPGs. "Like, D&D? Wow, I played that back in high school. People still play that?"

That conversation happened in February, while moving. We donated a fish tank (with fish) to our neighbors. The husband came over to our almost completely vacated apartment and said, "You must have played D&D in high school."

Rather than get into the "Well I still do" component with someone I barely knew, I simply said, "Yeah, my wife and I both were into it. How did you know?"

Turns out he'd spotted a D10 next to the fish tank that had escaped our notice. "I played that game to death in High School. Absolutely loved it. Good times." and that was that.

So when I was about twelve the Transformers arrived on the scene. I meticulously collected all Transformers, and even got a few imports from WorldCon and WesterCon (and other cons, when I attended). Hasbro/Takara had a release schedule that produced a specific set of figures annually, likely in stages (I forget now) over the year, no doubt with an emphasis on holiday sales. I was very efficient at this, spending all of my allowance money on Transformers. And RPGs. And books. I recall that by "season three" I had all of them but two. All Of Them. Thousands of dollars' worth of figures.

Those of you who might have seen my fanzines from those Middle and High School days may recall that Transformers and giant mecha seemed to crop up a lot thematically. I even published a little-known RPG called Mechanical Men that sold mostly at conventions I attended. Despite my love of the genre, I didn't advertise it much, however. It felt like one of those nasty little hobbies back in the 80's that you weren't supposed to be into, unless you were maybe seven years old. That might shock some kids today (and by kids I mean anyone under the age of 24), in an era when toys are specifically marketed at an older audience with money, or at kids who have parents pining for the nostalgic days of their youth.

So by the time I turned seventeen in 1988 I was still collecting Transformers but was also torn by other interests and a rapidly developing fascination for the opposite sex that it started to fall by the wayside. I think by the time I headed off to college they had sort of run the toy line into the ground, releasing non-transformable action figures that were cool looking but sort of defeated the whole point of the toy line.

In the end, many childhood hobbies I had went to the wayside, my fanzine died and I repurposed my existence to being a good student. My sole release for entertainment for years would boil down to only three elements: women, RPGs and movies (a majority of my college reading was study-related). I didn't even own a TV, and my aging PC was having trouble running stuff like Eye of the Beholder. I actually played no computer games in college, which ultimately was a Very Good Thing. I can't even imagine how students today pull it off (being poor may be the only saving grace, I imagine). (That's a whole different issue, too; my fascination for computer games today is very much a modern thing; my opinion of 99% of the computer/video game market prior to 1996 was very, very low).

So anyway, stumbling across this network of existing modern Transformers fans and collectors just sort of reminded me of that time when I at last shelved the whole collector-of-toy-robots things as I moved out of house and home and off to college. It was a worthy venture back in the day, as my desire to be a good student, develop a social life and meet women far outweighed my desire to collect toys. I have to say, I am glad that RPGs didn't go to the wayside. For whatever reason, when I started playing at age 10 I knew that this was one thing, one hobby that would mature and grow with me as I went along. It could carry its own prestige and not look scary to the stiffs and the mundanes, provided I was careful not to get carried away with it (or at least masquerade as someone who wasn't deeply obsessed about RPGs).

Anyway, I couldn't even imagine getting back into the giant-robot-toy-collection hobby, but its nice to see that others have kept it alive and well. It does make me wonder what life would have been like if I'd decided to keep the collection (and not sell it to a woman in Tucson who ran a used goods shop--she gave me a nice deal for the time, but I bet she made a killing on collectible reasales) and continue to pursue the hobby. Probably very expensive, and probably not the easiest thing to bring a date home to. Just sayin'. I don't care how much the movies tried to Sex it All Up. 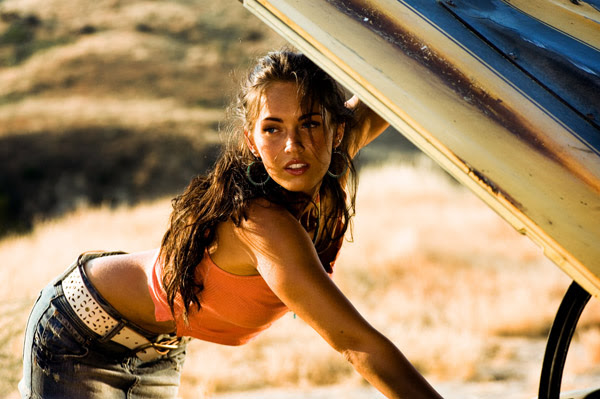 And just between you and me, lapsed and former Transformers fans still have it good: we've got the movies (which I find perfectly enjoyable; I am under no illusions that we're dealing with sophisticated literature in the genre of giant transformable robots here) and the even better video game (Transformers: War for Cybertron, which was a real blast to play).