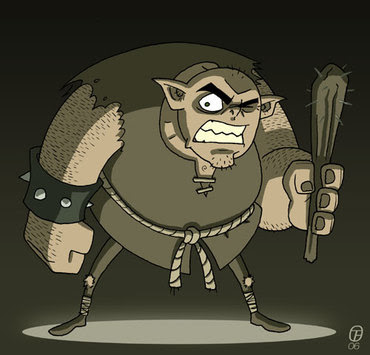 We have a paladin in the Wednesday night game, first time in a while I've had one in play, and the player (Brien) is a great and rules-savvy guy who has also run an archer-focused paladin in my Saturday game in the past. It was an interesting session last night as a fair portion of the decision-making process in the course the night was dictated by detect evil: the catch-all through the ages for determining who you should and shouldn't attack in D&D. Arguably, its presence in last night's game could be used as the sole defining factor in an arbitrary third party observer trying to determine what game we were playing (barring any Pathfinder titles on the covers of the books) simply because so far as I'm aware, no other RPG on the market that isn't emulating D&D provides for a black/white bad guy detection system that is unerring and offers no saves.

The session brought up two thoughts for me: first, I wonder to what extent alignment-based spells, detections and processes are integral to D&D in its overall feel and nature. I wonder this because I only have one campaign in which evil and good are regarded as absolutes in the cosmology, for which a detection spell can be used to unerringly determine the right choice of action for or against someone based on how their alignment reads (the Lingusia campaign).

My other two campaigns, Chirak and Enzada, deliberately eschew morality as black/white in favor of morality as subjective and not defined by any divine powers. In Chirak good and evil is defined purely by choice of action in regards to the social contract to which even the gods are restricted. In Enzada, morality as an absolute is unknown....some beliefs say it is determinate and objective, others say not at all, and a few skew towards the more Mythos-esque notion that morality is a clever ruse for frail human minds trying to cope with a universe that treats them in the way we might treat the bacterium in our guts.

A side effect of campaigns like this is that alignment-based magic really mucks things up. It's never fit well in Chirak, which I realize is one of the many reasons Runequest or D&D 4th edition works better for that setting; 4E cleverly retained alignments while cutting away all the objective-morality-defining spells and magic that created so very many plot-derailing story issues in prior editions. Enzada, as I learned last night, can support such, but it raises weird questions like, "if a paladin detects evil, sees that a gang of dire corby chicks are all radiating evil, but its because they're basically tiny amoral survivalists who don't know any better and are living in a eat-or-be-eaten world, then are they really evil in a sense that the paladin is looking for, and even if so, is there such a thing as irredeemable evil that the paladin can assertively act on regardless of any potential for good a creature might potentially exhibit?" Or put another way: were the dire corby chicks destined to always be evil? Hint: 39 of 40 dire chicks became pot roast last night. The tough one is being mentored by the tengu ranger in the party, who was trying to defend them.

On the one hand, its great to see this stuff as part of a storyline, and it got the entire party in a ruckus as they split down the line about a gang of dire corby slaves and their chicks. Where they clearly foes to be slain because magic does not lie, or were they simply unfortunate victims of circumstance who did not know any better? Part of the group acted at least partially because there is a strong implicit encouragment in 3rd edition (and Pathfinder) mechanics that one can magically define a creature's nature in an absolute sense. But the truth is that there was no reason one couldn't imagine that the dire corbies weren't simply victims in their own right, potentially redeemable, who had not as yet committed any evil acts. It was a tough call!

My Saturday group tends to look at things like detect evil not as it is normally defined but instead as "looking for evil intent." Which is an important semantic difference. Ironically that groups games in the Warlords of Lingusia setting, where evil is an absolute, and the entire cosmos is factionally divided between order and chaos in a strongly "Moorcok meets Zoroaster" manner. But....well, it works well the way we do it, because we don't get derailed on the plot by PCs arbitrarily attacking everything that radiates evil, basically. Instead what matters is "do they intend to do evil to us or those we protect?" instead.

So anyway, this has led me to thinking about how 4th edition really did get it right by cutting out alignment-based detection and effects. In doing so, it effectively removed one of the biggest "plot bypass" mechanics in the game system, and opened up the system to new ways of thinking and presenting fantasy worlds outside of the very much traditional alignment-defined-universal-morality format.

On the other hand, the paladin from 1st through 3rd edition and Pathfinder really is an interesting reversal on the Ring of Gyges tale, except instead of Gyges having a ring that makes him invisible and effectively immune from persecution for his ability to get away with crimes, he instead gains a ring (power) to determine with absolute certainty in the eyes of his faith who is and isn't an enemy to be slain. That's a powerful tool....in the real world, its an "ability" achieved through blind faith and unquestioning patriotism, but just imagine if the wrong person gained a device that could, perhaps on a genetic level, but with a mere glance, immediately brand you a criminal, deviant or otherwise objectively evil individual for whom rights suddenly were irrelevant. D&D's paladins are a thought exercise of the first order on this concept, and just how potent and deadly a social device it could become (and unfortunately in the real world too many people don't need a ring or a power to think they can objectively judge those around them).

I don't know...maybe I've read too many philosophy texts, but I've never been comfortable with any absolute presentation of morality in role playing games except in specific circumstances where it is important to the underlying structure of the setting. D&D has a weird issue, as its many decades of use have left it a tool that has been used in a vastly diverse number of ways to create a nigh infinite number of possible fantasy realms and interpretations of such...and yet its raw, purist core still operates on some very specific defaults that are currently being enshrined by some players as the One True Way, including weird notions like dungeons as a game focus, alignment as an absolute necessity, and some more recent phenomena like the utter requirement that the game maintain implicit balance to insure everyone feels special when they are playing (which is not in and of itself a bad goal, but the concept of balance is confounded with the idea of combat balance, rather than the idea of plot/story/adventuring balance, which are three entirely different yet equally important things).

But, I have rambled too much! This diabtribe must end.