The Current Final Word on Starfinder 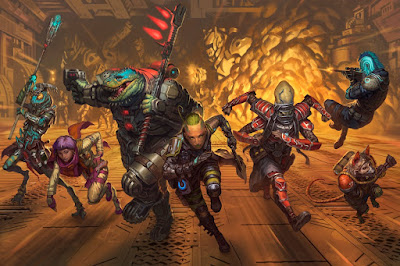 So I decided to shelve Starfinder for a while. Here's my basis for the decision:

1. When I start running Starfinder what I really want is a Science Fiction game with Paizo's brilliant graphics and appearance. I am not in love with Starfinder so much as I am in love with how Starfinder looks.

2. When I run Starfinder I find it hard to take seriously because I am so innoculated against the core conceits of the D&D/Pathfinder style universe that blending it with science fiction is hard to do. As a result, I can construct a universe but it feels more like a universe with trappings of Red Dwarf and Battle Beyond the Planets than something more serious, which I desperately want in my D&D types right now.

3. The reason I feel an incongruity after every game is because what I want is to run a hard/serious science fiction game. Starfinder is not the game for such a task. When I run it, I feel like I am distracting my precious life minutes away from a task that would be better suited to the use of said time. Traveller, for example, would fit my needs much better than Starfinder.

4. When I am in the right mood, it is a lot of fun, but I can't sustain it. I haven't pinpointed exactly why this is so (beyond points 1-3) but it is enough to know that if I don't get excited to run it every single week that a session is up then that is enough to shift my focus elsewhere. To contrast: I am always excited for a Call of Cthulhu or Cypher System night.

Also, blame Advent Horizon to a certain extent. It was while trying to prep for AH that I realized that my problem with Starfinder was rooted in the fact that it neither embraces the fantasy nor the science fiction enough to truly become one or the other. And since I've never been a big fan of "mixed genre" SF/fantasy mashups, I lack the critical requisite interest necessary to know what to do with it.

5. I have limited time in my life, so even though there's a lot in Starfinder I like, it takes too much time for me to prep, and as a result I need games which cater to that limited time I do have. This is sad....Starfinder makes excellent headway in the "ease of access" zone of D20 based gaming, yet my life is so booked up these days that even with the improvements SF offers I just can't find the proper time to invest myself in it. This, in the end more than items 1-4 above, is the main problem.

You might ask, "Why not read the modules?" and I would point out that for my style of GMing I take far less time to prep a game I design than to try to read and prepare someone else's work. And that's a big part of the problem....I have not got the time (or inclination) to sink into absorbing the enormous amount of Starfinder content I have on my book shelf. And that includes either world building or reading and learning the default Pact Worlds setting.

Doesn't bode well for Pathfinder 2.0.....crossing my fingers and hoping it is excessively user friendly!
Posted by Doctor Futurity at 6:00 AM