Ten Steps on How to Play Fortnite as a Dad 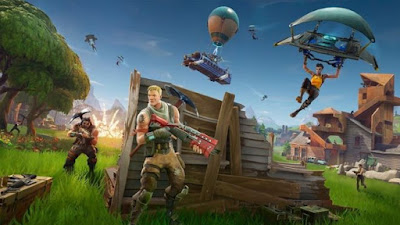 Ten easy steps to gaining deep satisfaction in Fortite if you are an actual adult with children who also play Fortnite!

10. See that cool skin? Buy it. See that cool dance? Buy it. Now equip it and watch as everyone goes insane in the waiting zone attacking you for having what they want but can't afford because they're, you know, kids.

9. See that skin your kid wants? He will do an insane number of chores to earn the points to afford it. Use this wisely! It's an excellent motivator.

8. You can teach your children critical thinking skills with Fortnite by explaining to them that 99% of the Youtube videos espousing Fortnite secrets and reveals are all a bunch of conspiracy garbage.

7. In the same vein as #8 you can also teach them a bit about game design by explaining that sometimes when you glitch into an area you shouldn't be and see a big block it is not Kevin returning but just a polygon artifact that the devs didn't think anyone would be able to find.

6. Don't play it consistently. It's better to play it once every few weeks and clear out an entire three weeks' worth of weekly challenges in one sitting, and prevents you from learning to hate the game a tiny bit less.

5. You get to learn that among the average Fortnite players "mid twenties" is damned old and where everyone not ages 7-13 is grouped. Rest easy knowing that age 23 or 48 or 56, it is all the same to the youngest generation Z!

4. Appreciate that the skins in Fortnite are at least amusing and creative. Contrast with Black Ops IIII (sigh) in which it looks like Serious Bizness Mercs all got caught in a paint store when it exploded, or Apex Legends, where it doesn't matter because these ridiculous avatars should all be ground under the heel of my Titan mech and what the hell Respawn.

3. Appreciate the fact that you can get 3-5 games of Fortnite done in the time it takes you to play through one game of PUBG and then get sniped from across the map.

2. Watch and learn as 11 year olds build twenty story tall fortresses in a matter of seconds. Do not despair! It turns out that the reason they can do this is because no one told them not to. Also, their brains are younger and more adaptive. You can still figure it out, though, just give up any pretense of your fort making sense and you'll be fine.

1. Most of all, enjoy the modern 21st century equivalent of the bonding experience in computer gaming with your kid(s).

BONUS! What System should I play Fortnite on?

You can play Fortnite on anything, possibly even your microwave if Epic has anything to say about it. Here's how your choice of system matters:

Mobile: Fortnite on the phone is for your kid, or if you are desperate for entertainment and don't mind being put down like a dog repeatedly and often.

Xbox: Although you can have a good experience here, Xbox supports keyboard and mouse, and seems to group (heavily) with the leet PC gamers so you will feel constant and never ending disappointment as you die repeatedly.

PC: the leet gamers and streamers linger here. If you want to at least know for certain that the guy who killed you was A: amazing, B: streaming your death, C: maybe actually cheating, who knows; and D: mocking you while A through C happen, then PC is your game.

Yes, you could keep playing PC in the hope you will "get good," but it won't happen unless you're under 25 and can explain to me what the f*** the dab police are (or more specifically WHO he is).

PS4: My preferred choice for gaming in Fortnite, it is the only place to get good graphics, less lag, and a smug sense of superiority as the very high casual play base on PS4 means you can actually shoot someone else first occasionally.

Switch: The Nintendo Switch is the secret weapon for People Who Want to Get Things Done. You play on the Switch not because it's a good iteration of the game (it's not) but because the low res graphics (720p), limited draw distances and potential for your opponents to be operating with joycons and a tiny screen mean you can DOMINATE them. And you'll see how, easily! No one builds in the Switch sessions...hardly anyone seems to have gotten used to how to build quickly with the Switch arrangement, and its the only game where Rumble mode can feel like Gettysburg as everyone charges each other in wide open fields. It's crazy, but it works. The reason for this is simple: without at least a Switch Pro controller the game's difficult to aim in, and Epic cordons off Switch and Mobile players in the same corner. You will almost feel sorry for the mobile players as you watch them clumsily try to swing their touch screen aim around to shoot you as you gun them down.
Posted by Doctor Futurity at 6:00 AM

Email ThisBlogThis!Share to TwitterShare to FacebookShare to Pinterest
Labels: fortnite